Social media is lit up with the heated debate over Aurat Azadi March dividing the people into two broad categories: proponents and opponents. The advocats of the March claim the demands of the women to be legal and must be accepted, while the opponents are of the view that it spreads indecency and vulgarity. The problem here is lack of understanding and vision of the issue between the two categories.

The issue with the feminists in Pakistan is that they have not decided between the equality and equity. Equity means fairness treatment of men and women according to their respective needs. This may include equal or treatment that is different. For instance, if there are two people, one with short and another with long height. Equity implies providing only short heightened person with stool to make it equal to the tall person. On the contrary, equality means, providing both people with a stool. Thus, the demand of equality will degrade the position of women.

Besides, there is confusion among the proponents regarding the definition of feminism. It is not necessary that the feminists only talk about equality. They are divided into different categories regarding their rights. For instance, liberal feminists have demanded equal rights. It means women should be given equal positions irrespective of their nature or different attributes. Cultural feminists criticise the Liberal feminists. According to the cultural feminists, demanding equal rights means treating women like men. It further says that women’s nature is superior to men. Women are loving, caring, gentle and so on, while men are harsh and arrogant. According to them, the women in leadership positions would be more likely than men to cultivate a more peaceful and less war-torn world. 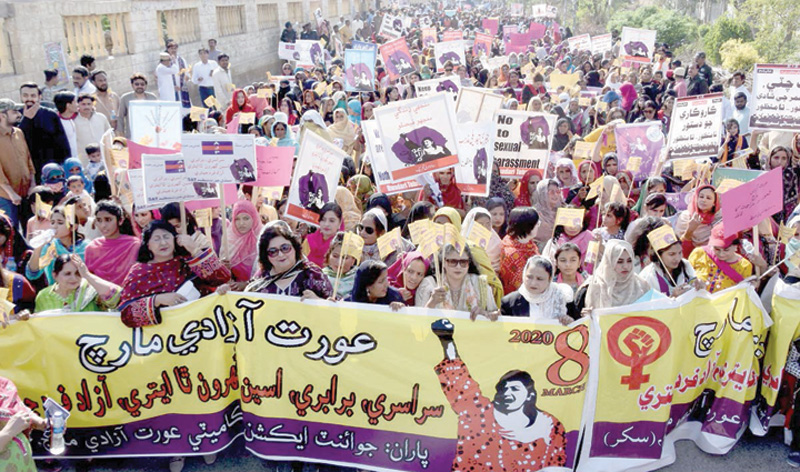 Unless women decide between equality and equity and unite them under single platform based on the fix demands, their entire efforts to materialise their basic rights will reduce to ashes. Although the organisers of the March recently launched the 15-points manifesto, yet they seemed divided. During the March, many women appeared randomly with placards at different places inscribing some sentences that were contradictory to the fixed manifesto of the organisers.

Keeping in view the religious nature of the country, the feminists must choose equity over equality and demand religious rights. Women in Pakistan are denied even basic Islamic rights through misinterpretation of the religion. They must raise the voice against the bigot elements of the religion that treat women like an object. Besides, they must demand good treatment of tribal and women belonging to rural regions of Pakistan that are victim of poor treatment at the hands of men.

The feminists must raise a voice against the concept of isolation of women at home. Besides, the participant of the March must also demand for the right of modern education for the women living in the backward rural regions of Pakistan. The Holy Quran states, “And one of His signs is the creation of the heavens and the earth and the diversity of your languages and your colors. Indeed in that are signs for those of knowledge.” (30:22). Allah Almighty wishes that his creature should get the knowledge of science to understand His existence. At present, the female literacy rate in FATA is only three per cent. Overall, the literacy rate of female is 48 per cent against male literacy rate of 70 per cent.

Moreover, the women, through the March must create awareness among the rural women who are victim of force marriages. According to Islam, consent of a woman is necessary for her marriage. Abdullah bin Abbas narrated: “A virgin girl came to the Prophet (PBUH) and mentioned that her father had married her against her will, so the Prophet (PBUH) allowed her to exercise her choice (between accepting the marriage and invalidating).” (Abu Dawud). In another narration of this hadith, it states that she responded, ‘Actually, I accept this marriage, but I wanted to let women know that parents have no right to force a husband on them.”

The opponents of the Azadi March see the movement through the narrow prism of indecency and vulgarity. They have only highlighted some un-Islamic demands of the March to target it without focusing on its original manifesto. They must realise that these vulgar demands do not represent the vision of the March and are equally condemned by many feminists. On the social media, many placards being held by women were deliberately edited and some indecent sentences were inscribed and circulated by the opponents to downgrade the March that is not only shameful, but also a great sin in Islam. Besides, the opponents only see the equality facet of the Aurat Azadi March. According to them the March is the demand of equality only.

Under this scenario, it is necessary for feminists to launch a coherent movement by making their demands fixed in accordance with Islam. They must focus on the rural and tribal women who are denied even the basic women rights inscribed in Islam.

The writer is a columnist