The Curious Case of the Lion and the Grass Reaper 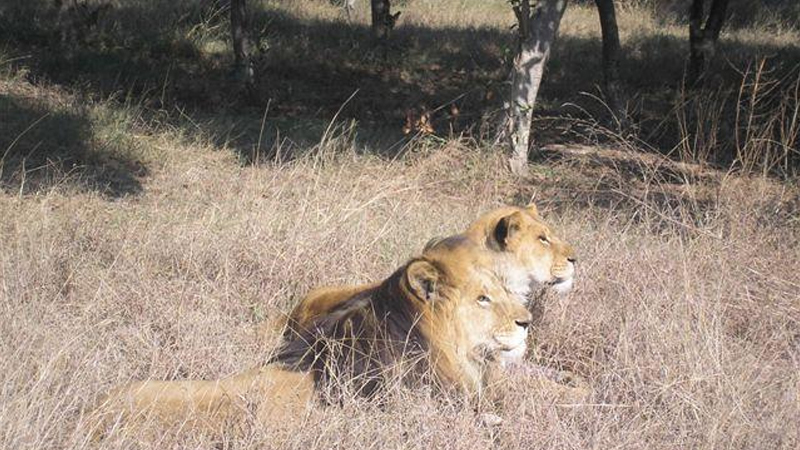 A virus on a global killing spree. An infant corpse inside a capsized migrant boat. Communal riots and lynchings. Brutal honor killings and relentless child abuse. Of late, local and international press appear to be choked with morbid news stories about people dying tragic deaths. Another such story did the rounds of social media last week. However, this time around the victim’s life was claimed not by any disease, angry mob or sexual predator but a pack of animals at a zoo.

Bilal Hussain, a 17-year-old gardener at the Lahore Safari Zoo, went missing last Monday around 5 pm. When he failed to show up, his father, Muhammad Shareef, set out in search of his son. Upon exhausting all avenues of search, Shareef went looking for Bilal at the zoo and much to his horror, stumbled upon the skeletal remains of his son inside a lion’s cage. Lying beside his corpse, or what was left of it, were his shoes, sickle and some cut grass wrapped inside his shawl which confirmed that the remains did indeed belong to Bilal.

The fact that a scene of four lions mauling a young boy at a zoo and scraps of his body, left to rot inside the cage, went surprisingly unnoticed for three days shows that Bilal was not just killed by the lions but also the zoo administration’s irresponsible behavior. It is also worth noting that a week has elapsed since this horrifying occurrence and no follow up story or police report about the incident has emerged. How Bilal ended up inside a 12-foot-high enclosure containing such deadly creatures remains an unresolved mystery.

“We are still wondering how he crossed the protective fence which is quite high and entered the lions’ field,” director of the Lahore zoo, Chaudhry Shafqat, told the press. He appeared to be in complete denial of the fact that someone could breach the enclosure and was confident that the park facility had “more than enough safety measures in place”. However, the state of the faulty CCTV cameras around the place suggests otherwise. The park that spans around 242 acres of open space lacks any proper security arrangements. Last year, the management announced plans to replace the defective cameras and repair the enclosure’s rusted fencing after funds were

Aftab 2: allocated to the park as part of the 2016-17 financial scheme, but it appears that these arrangements still stand incomplete.

The Lahore Zoo has witnessed its fair share of such fatalities in the past. In 1999, an infant was fatally mauled by a bear from inside the cage. In 2008, a Bengal tiger tore open the jugular vein of a security guard. There have also been numerous instances where the park administration’s negligence and inattention resulted in animals killing other animals. Given the risk that a zoo setting poses to its visitors, employees as well as the creatures it houses, it is quite imprudent of the park management to not put in place appropriate security protocols to safeguard against such dangers.

The entire episode has also exposed how sloppily one of the country’s largest and most expensive national parks is being managed. It is astonishing how the entire scene escaped the zoo staff’s notice. This shows that these animals probably go unattended for days and explains why the lions were so starved that they pounced on poor Bilal the moment he came near them.

Instead of acknowledging their own incompetence, the park authorities instead resorted to the intimidation tactics commonly employed in such cases to hush up the entire incident. Bilal’s parents reported being harassed by the park director into giving false statements to the police about their son being mentally deranged and alleged that the director had threatened to file a criminal FIR against their son for trespassing. Shafqat also told the press of the possibility that someone had dumped the corpse inside the cage to avert suspicion though Bilal’s father insisted he had no enemies.

So, what really happened to Bilal?

Though without the CCTV footage, piecing together what transpired at the crime scene will be a Herculean feat, there is enough evidence to show that the park administration is equally guilty and, therefore, must be held accountable.

Though CM Buzdar ordered a departmental inquiry and had sought a report within twenty-four hours, details about Bilal’s death have yet to come forth. Meanwhile, news of his death appears to have been drowned in collective amnesia coupled with the authorities’ reluctance to lift the shroud of mystery around this tragedy. No one appears to be concerned that a family has lost not

Aftab 3 : only a child but also its only source of income. “I have six children – three daughters and three boys – and Bilal was the eldest,” mourned Shareef. So far, no announcement regarding compensating Bilal’s family has been made by either the park authorities or the CM.Ever since news of the zoo accident broke last week, it has been hard not to draw parallels with a series of similar mysterious and devastating accidents making news headlines recently. The toxic gas leak at Keamari. The Rohri railway crash. The Tezgam inferno. Are these accidents just that – accidents – or manifestations of the concerned authorities’ incompetence?

In each of these instances, the reflex action of the powers that be has been to deflect culpability by either blaming the victims or using some other authority as a scapegoat after offering half-baked sympathies to the victims’ families. Committees spring to action, inquiries are launched and lofty promises about preempting such future accidents are made. This charade continues until public outrage around the event fizzles out and the news cycle moves on. The victims, on the other hand, fade out of public memory over time or live on as nothing more than nameless faces attached to a death count, their suffering to be later recounted over emotionally-worded calls for justice on social media. One can imagine Bilal’s death being remembered as the curious case of the lion and the grass reaper, one that was tragically overlooked like most other atrocities inflicted on the common man.