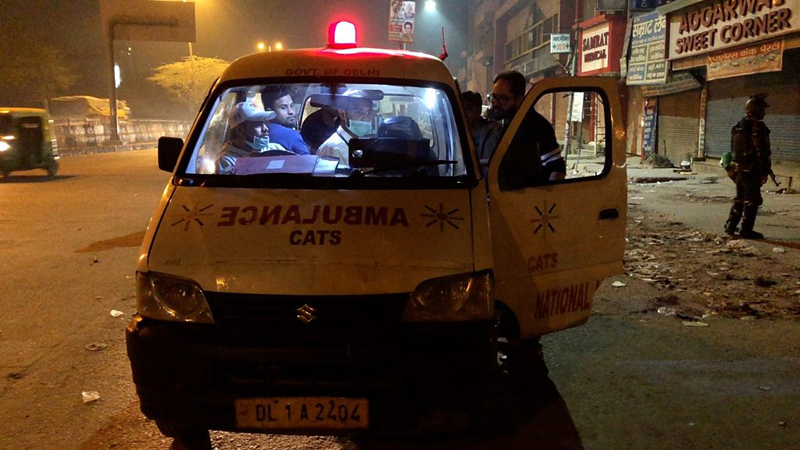 As clashes that broke out on Monday over India’s Citizenship Amendment Act continued for a second day in New Delhi, the death toll from the violence rose to 10 on Tuesday, Scroll.in reported.

The clashes between groups that have been demonstrating for and against the CAA left at least 150 people injured as well, Sunil Kumar, the medical superintendent of Guru Tegh Bahadur Hospital, told reporters.

The riots – the deadliest in the city since protests against the new citizenship law began over two months ago – came as US President Donald Trump was in India on a two-day official visit.

Trump and Prime Minister Narendra Modi met for talks on Tuesday at a venue located a few miles away from where the clashes occurred.

After the talks, Trump told reporters that he had heard about the violence, but did not discuss it with Modi. He later declined to comment on the citizenship law. “I don’t want to discuss that. I want to leave that to India and hopefully they’re going to make the right decision for the people,” Trump said.

According to the Scroll.in report, angry mobs threw stones and petrol bombs at Muslim homes in Kabir Nagar, near Maujpur. Journalists were also attacked and many were forced to delete pictures and videos from their phones, the publication added.

The report said Delhi Chief Minister Arvind Kejriwal had said he had a ‘positive meeting’ with Home Minister Amit Shah regarding the riots in the Indian capital. Speaking to the media, he maintained that police were outnumbered and unable to take action as they did not have orders to do so, the publication said.

According to The Wire, stone-pelting and arson have continued in the Ghonda area, close to Maujpur. Across the locality, The Wire saw broken and burnt vehicles, burnt shops and vehicles still on fire. There were some police standing at the edge of the Hindu-majority area, but did not intervene when vehicles were burning, the publication said.

In the Bhajanpur area in the city’s northeast, black smoke rose into the sky after Hindu protesters set fruit and vegetable shops and a Muslim shrine on fire, witnesses said.

Meanwhile, a mosque in Ashok Nagar neighbourhood was set on fire on Tuesday afternoon, The Wire reported. It said a mob shouting ‘Jai Shri Ram’ and ‘Hinduon ka Hindustan’ paraded around the mosque, and a Hanuman flag was placed on the mosque’s minaret. Shops near the mosque were looted by the mob.

Commenting on the development, President Arif Alvi in a tweet termed the vandalising of the mosque a ‘disgraceful act’. “It seems to be a reminder to Muslims of the Babri Masjid episode. I think secular forces within India should rise against such barbaric actions,” he wrote.

The clashes erupted in a northeastern district of the city between thousands of people demonstrating for and against the new citizenship law. Eyewitnesses said the violence continued overnight, and several shops were broken. “There was stone pelting in the area early this morning also,” a resident was quoted as saying.

Tensions in parts of the city remained high on Tuesday with schools remaining shut in some areas amid news reports of fresh clashes. At least five metro stations in the city were closed. Police used tear gas and smoke grenades but struggled to disperse the stone-throwing crowds that tore down metal barricades and set vehicles and a petrol pump alight.

“Some of the people brought in had gunshot wounds,” said Dr Rajesh Kalra, additional medical superintendent at the Guru Teg Bahadur Hospital in New Delhi.

One police constable was killed, a police official said, declining to be named since he wasn’t authorised to speak to media.