Pakistanis stranded in China started arriving in Islamabad on Monday as the government resumed flight operations to the virus-hit country.

Speaking at a press conference in Islamabad later in the day, Special Assistant to Prime Minister for Health, Dr Zafar Mirza, clarified that none of the passengers that had arrived in the country on Monday was suspected to have Coronavirus or needed to be kept under observation.

He highlighted that no citizen, whether Chinese or Pakistani, is allowed to leave China without spending a 14-days, disease-free period.

This measure has protected the people of our country. Flights that arrived on Monday carried both Pakistani and Chinese citizens who were screened according to the protocol in place.

The death toll in China has soared to 351, and nearly 17,000 people have been infected with the deadly Coronavirus.

The new virus has been declared a global emergency by the World Health Organization, as the outbreak continues to spread outside China.

There are up to 800 Pakistanis studying in various universities in Wuhan, which has been quarantined by the Chinese authorities

Several countries, including India, scrambled to evacuate their nationals from the Chinese city of Wuhan, the epicentre of the outbreak, as the death toll in China, soared above 350 and 17,000 people were infected.

The virus that had emerged in early December was traced to a market in Hubei province capital, Wuhan, which sold wild animals. It has now spread to more than two dozen nations, including India where the first case was confirmed in Kerala, the US, Britain, Russia and Sweden.

So far, about 124 cases have been reported in other countries. Several countries, including India, the US, Japan, South Korea, the UK and Bangladesh, have evacuated their nationals from Wuhan by sending special aircrafts. 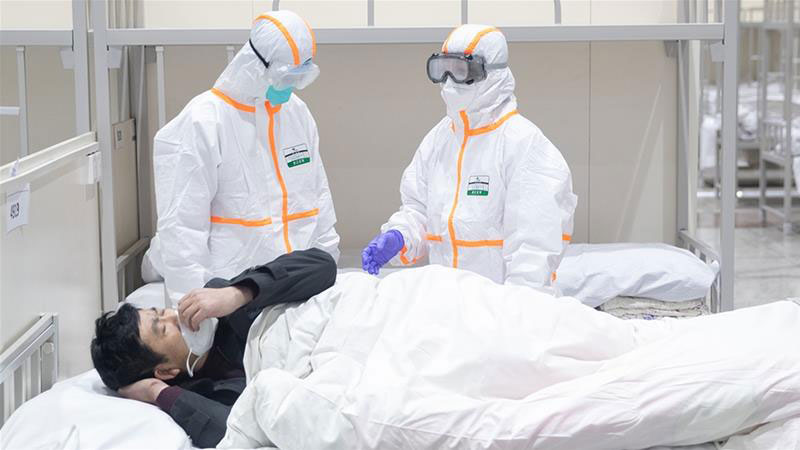 The World Health Organisation has declared the outbreak a global emergency but not advised international trade or travel restrictions.

According to a study by the University of Hong Kong scientists, as many as 75,815 people in Wuhan might have been infected with the new Coronavirus, the South China Morning Post reported.

The research, published in The Lancet on Saturday, was based on the assumption that each infected person could have passed the virus to 2.68 others, the Hong Kong-based daily said.

Earlier, the Foreign Office spokesperson of Pakistan said on Thursday that there had been no evacuations from China amidst the Coronavirus outbreak and that countries had only spoken to Chinese authorities so far in this regard.

Islamabad is monitoring the evolving situation and will decide on evacuation after consultations among all the stakeholders.

Regardless of any WHO declaration, governments, companies and people around the world continued to ramp up efforts to try and contain the mysterious illness believed to have emerged from an animal market in the central Chinese city of Wuhan.

Meanwhile, Chinese Ambassador to Pakistan, Yao Jing, thanked Pakistan for extending their unwavering support to the country during this difficult time.

He explained that so far, people leaving China are being screened over 14 days. However, nobody from Hubei province or the city of Wuhan (ground zero for the outbreak), had been allowed to travel domestically or internationally.

Right now, we are not encouraging Chinese citizens to travel abroad, he said. He added that the Chinese citizens travelling to Pakistan are being traced and monitored by the respective embassies and companies.

Some Pakistani students in Wuhan, however, are complaining that they are not being taken care of by the Chinese authorities. They demanded immediate evacuation in a social media post earlier this week.

Meanwhile, the US has told its citizens not to travel to China.

The state department issued a level four warning; having previously urged Americans to reconsider travel to China. It said that any citizens in China should consider departing using commercial means.

China has said it will send charter planes to bring back Hubei province residents, who were overseas, as soon as possible.

Most international cases are people who had been to Wuhan in Hubei.

However, in eight cases in Germany, Japan, Vietnam, and the US, patients were infected by people who had travelled to China.

There are up to 800 Pakistanis studying in various universities in Wuhan, a city of 11 million people, which has been quarantined by the Chinese authorities to stem the spread of the deadly virus.

Earlier, Dr Mirza said in Islamabad, “We believe that right now, it is in the interest of our loved ones in China to stay there. It is in the largest interest of the region, world, a country that we don’t evacuate them now.”

“This is what the WHO is saying, this is China’s policy and this is our policy as well. We are standing with China in full solidarity.”

“Right now the government of China has contained this epidemic in Wuhan City. If we act irresponsibly and start evacuating people from there, this epidemic will spread all over the world like wildfire.”

He said that Pakistan’s embassy in China was in contact with the Pakistani citizens and the government believed that China’s policies to contain the virus were adequate.

“The government cared about its citizens just as much as their own families. But we don’t want to take an emotional decision and become a reason for the spread of this disease,” he continued.

Meanwhile, the FO spokesperson said the opening of the Pakistan-China border had been delayed until April due to the outbreak.

The border crossing was previously scheduled to begin functioning in February. However, the Gilgit-Baltistan government had sought a delay in the opening as a precautionary measure.

As Gilgit-Baltistan is Pakistan’s closest region to China, precautionary measures are needed to prevent any possible threat of the spread. The concern is it could spread to countries with weaker health systems, especially Pakistan, and may cause epidemics.