February 9, 2013 echoed with a myriad of voices. Those that arose in jubilation over a terrorist’s hanging; those that resounded the final rendering of the proverbial ‘delayed justice’, and the few that arose in the Kashmir valley and found resonance throughout the country, erupting against an apparent fallacy of the criminal justice system. Those voices exclaimed that irrespective of the substance, criminal procedure had erred in essence.

Whether or not these concerns are valid, they strengthen the case against Afzal Guru’s hanging. And if they have even a sliver of veracity, the entire criminal justice system and a public with an ‘opinion’ can do absolutely nothing to make amends because the accused was hanged seven years ago. I attempt to neither make an argument against the concept of death penalty nor do I pass a verdict on Afzal’s guilt or otherwise. The criminal justice system has been instituted to punish the wrongdoers to guard the interests of other citizens, but being an ‘allegedly’ accused-centric criminal justice system, the rights and dignity of the accused and the due process of law should be the focal point of any trial and the pursuant discourse.

“The quality of a nation’s civilisation can be largely measured by the method it uses in the enforcement of its criminal law. The first obligation of the criminal justice system is to secure justice by seeking and substantiating the truth through proof. Of course, the means must be as good as the ends and the dignity of the individual and freedom of the human person cannot be sacrificed by resorting to improper means, however worthy the ends… Safety of society and the worth of the human person may co-exist in peace.” 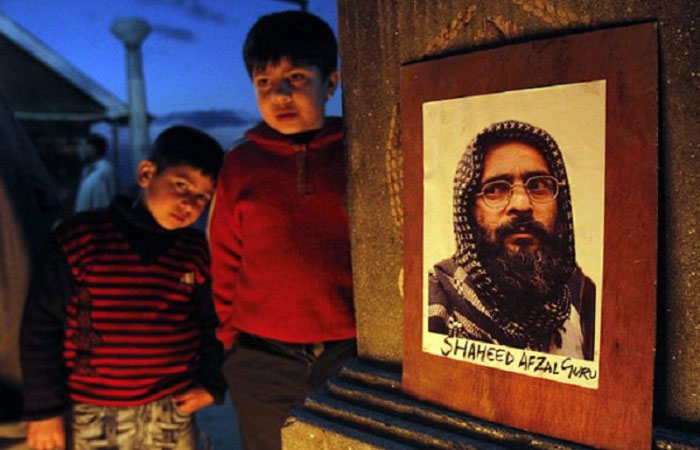 The dominance of public opinion is a reality. We may draw from the denunciation theory 12 propounded by the French sociologist Emile Durkheim that death penalty serves to express society’s condemnation depending on the relative seriousness of the crime. Some crimes outrage public morality and the society insists on adequate punishment, irrespective of whether it is a deterrent or not. It is pertinent to note to what extent the collective consciousness of a society and public opinion dictate the administration of criminal justice.

How did the police get to Afzal? They said that Geelani led them to him. But the court records show that the message to arrest Afzal went out before they picked up Geelani. The high court called this a “material contradiction” but left it at that. The arrest memos were signed by Bismillah, Geelani’s brother, in Delhi. The seizure memos were signed by two men from the J&K police, one of them an old tormentor from Afzal’s past as a surrendered ‘militant’. It goes on and on, this pile-up of lies and fabricated evidence. The courts note them, but for their pains the police get no more than a gentle rap on their knuckles. Nothing more.

The real story and the tragedy of what happened to Afzal is too immense to be contained in a courtroom. The real story would lead us to the Kashmir valley, and the most densely militarised zone in the world

Anyone who was really interested in solving the mystery of the parliament attack would have followed the dense trail of evidence on offer. No one did, thereby ensuring the real authors of the conspiracy will remain unidentified and un-investigated. The real story and the tragedy of what happened to Afzal is too immense to be contained in a courtroom. The real story would lead us to the Kashmir valley, that potential nuclear flashpoint, and the most densely militarised zone in the world, where half a million Indian soldiers-one to every four civilians-and a maze of army camps and torture chambers that would put Abu Ghraib in the shade are bringing secularism and democracy to the Kashmiri people. Since 1990, when the struggle for self-determination became militant, 68,000 people have died, 10,000 have disappeared, and at least 100,000 have been tortured.

What sets Afzal’s killing apart is that unlike those tens of thousands who died in prison cells, his life and death were played out in the blinding light of day in which all the institutions of the Indian democracy played their part in putting him to death. Now he has been hanged, I hope our collective conscience has been satisfied. Or is our cup of blood still only half full?

It is generally perceived that by awarding the most stringent punishment for the heinous crimes, at least to a certain extent, future crimes may be deterred. A simplistic yet rational argument in support of deterrence is that many accused perpetrators fight strenuously to avoid execution; few volunteer for that. That potential perpetrators view execution as worse than life imprisonment, and this confirms why the existence of the death penalty would deter at least a few. Although there is no data to support that death penalty deters future terrorist activities, it is seen that the accused often plead guilty so that they get life imprisonment. Like India, there are several other countries that have reserved death penalty as punishment for “terrorist offences.” Uganda, for instance, imposes mandatory death penalty for terrorists. There is, thus, a strong case for ensuring convictions and awarding them the death penalty; the delay aspect being a different debate altogether, excluded from the scope of this essay.

With Afzal’s execution the message is loud and clear that people waging a war against the state will be dealt with harshly. Afzal’s execution took 11 long years, yet ‘justice’ has been done. In a moment of rare unity, the major political parties, the Congress, the BJP and the CPM, came together as one to celebrate the victory of the ‘rule of law. There is a sameness of kind between death and remaining alive even under the most miserable conditions, and consequently, there is no equality between the crime and the retribution unless the criminal is judicially condemned and put to death.

Any discourse on the constitutionality or the jurisprudential validity of Afzal Guru’s hanging now is merely civil society introspection on the ethics and procedural aspects of death penalty. It highlights the importance of dissent in a democracy and reinforces the questions of the rights and dignity of the accused.

In her book The Hanging of Afzal Guru and the Strange Case of the Attack on the Indian Parliament, Arundhati Roy writes: “Whatever he may be guilty of, Afzal has not been accused of being either a direct participant or a major conspirator in the 2001 attack on Parliament. Yet prominent individuals whose complicity in that crime is far more direct and more clearly established than Afzal’s remain unpunished, and indeed have yet to be brought before a court of law. A man has been hanged and maybe rightly so. The curious case of Afzal Guru, remains, in his death, more than it was in his life, a glaring issue, stirring the ‘collective consciousness’ of a people.”

The writer is the organising member of the Kashmir Law Circle