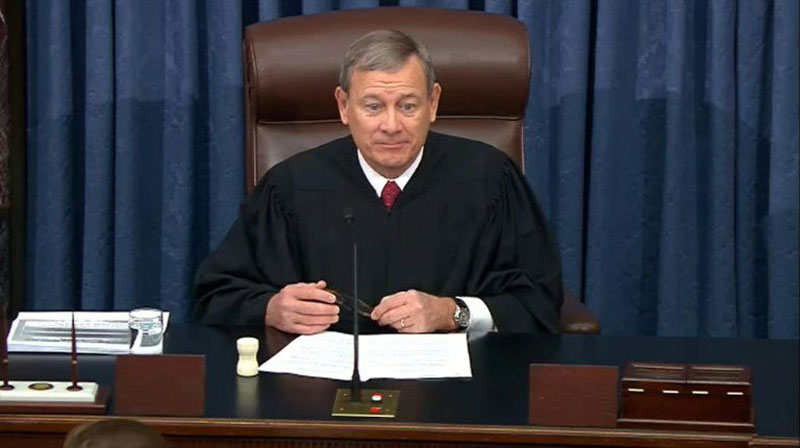 US President Donald Trump‘s lawyers were to wrap up their defense at his Senate impeachment trial on Tuesday but their hopes for a swift acquittal may be in jeopardy amid calls for more witnesses.

Democrats want former national security advisor John Bolton to testify about Trump’s dealings with Ukraine and there are growing indications that enough Republican senators may support the demand.

“I think it’s increasingly likely that other Republicans will join those of us who think we should hear from John Bolton,” said Utah Senator Mitt Romney, one of the few Republicans who has dared to publicly criticize Trump and risk his Twitter ire in the past.

Calling Bolton, and potentially other witnesses, to testify could prolong the historic trial and torpedo efforts by the White House and Republican Senate Majority Leader Mitch McConnell to bring the proceedings to a close by the end of this week.

Trump is to deliver the nationally televised “State of the Union” speech to a joint session of Congress on February 4 and the White House clearly wants to have moved past impeachment by then.

Democratic Senate Minority Leader Chuck Schumer accused the White House and McConnell on Tuesday of seeking a “very short and incredibly rushed trial.” “Because the longer it goes on, the more likely that new evidence and more new evidence will come out that further implicates the president,” Schumer said. Bolton is looming large over the trial after The New York Times reported that an upcoming book by the 71-year-old foreign policy hawk contains revelations that could harm Trump’s defense.

According to the Times, Bolton says in the book that Trump told him in August that he wanted to freeze military aid to Ukraine until Kiev opens an investigation into political rival Joe Biden and his son Hunter, who served on the board of the Ukrainian gas company Burisma.

The accusation that the funds were withheld for Trump’s own political purposes was at the heart of his December 18 impeachment by the Democratic-controlled House of Representatives for abuse of power and obstruction of Congress.

Trump’s lawyers were to conclude their defense of the president before the 100 members of the Senate beginning at 1:00 pm (1800 GMT).

Once they wrap up, senators will have 16 hours to pose questions to White House lawyers and the seven members of the House who have served as prosecutors at just the third impeachment trial of a president in US history.

The questions will be submitted in writing to US Supreme Court Chief Justice John Roberts, who is presiding over the trial and will read them aloud.

After that, the Senate is expected to debate whether witnesses should be subpoenaed.

Democrats will make the case that Bolton should appear while Republicans may demand the testimony of Hunter Biden or perhaps even that of his father, the former vice president who is seeking to challenge Trump in November’s presidential election.

Four Republicans would need to join Democrats in the Senate, where Republicans hold a 53-47 edge, to allow testimony from Bolton and others.

While just 51 senators are required to allow trial witnesses, 67 senators — a two-thirds majority — are needed to remove Trump from office and despite some cracks in the Republican ranks he does not appear in any serious danger at the moment.

Trump’s lawyers launched a concerted attack on the Bidens on Monday, arguing that the president’s demand that they be investigated was motivated by concerns about corruption not personal political gain.

Dershowitz, who has made a career defending unpopular positions and controversial clients — O.J. Simpson and Jeffrey Epstein to name just two — argued that the House case against the president was “unconstitutional” and amounted to a congressional power grab.

He also sought to neutralize the Bolton developments. “Nothing in the Bolton revelations, even if true, would rise to the level of abuse of power or impeachable offense,” Dershowitz said.

Trump attacked his former advisor, whom he fired in September, tweeting that he “NEVER told John Bolton that the aid to Ukraine was tied to investigations into Democrats” and suggested Bolton was making the allegations “only to sell a book.”