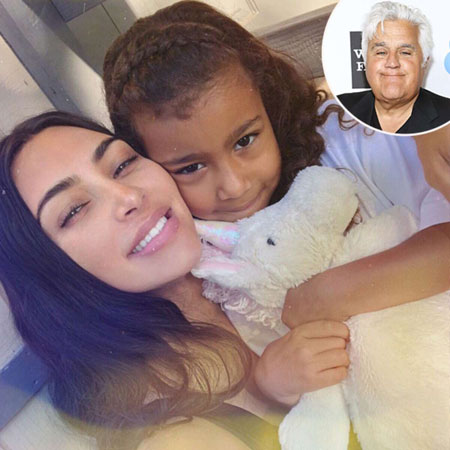 North West almost had a completely different name. On Tuesday, Kim Kardashian revealed that she and Kanye West got the best baby name suggestion from Jay Leno, who suggested they give their eldest child her now-iconic moniker. During a fan Q&A session with sister Kylie Jenner, where the 22-year-old showed off her makeup artist skills, the KKW Beauty founder shared that she was reluctant to use the idea at first, but it ultimately ended up being the right decision.

“North took my, like, a week to name her,” she said as her younger sister did her makeup. “Not a week, but, like, four or five days. I actually got it from Jay Leno, who made that as a joke. And I was like, ‘No way, I would never name my daughter that.’ Like, I said that on his show. Everyone was coming up to me like, ‘It’s such a cool name. You should really think about it.’ And then Pharrell had, like, all these meanings.”

She added, “They really become the name that you name them.”

As for her other children Saint, 4, Chicago, 2, and Psalm, 8 months, the mom of four admitted that the name process didn’t get easier as their family expanded. “So, Saint I couldn’t think of anything either. And we got books and we were sitting in there…it just came. Kanye came up with Saint. And then Chicago took me, like, two weeks.”

But when it came to Kim and Kanye’s youngest, the SKIMS founder credited Kylie with naming him Psalm. Chiming in, Kylie said, “Well, you thought of it and I vouched for it.”

Still on the topic of their famous family, the siblings weighed in on a fan-favourite topic: Which sister is mom Kris Jenner’s favourite? After Kim insisted that the answer is Kylie, the Kylie Cosmetics mogul said the title should go to her older sister.

“I think you’re her O.G., you know?” she told Kim. “She definitely likes us the same, but if we’re being funny…I, like, treat her-she’s like me and I treat her like the queen of the world.”

“I just wished I would be you in Instagram again,” Kim joked.