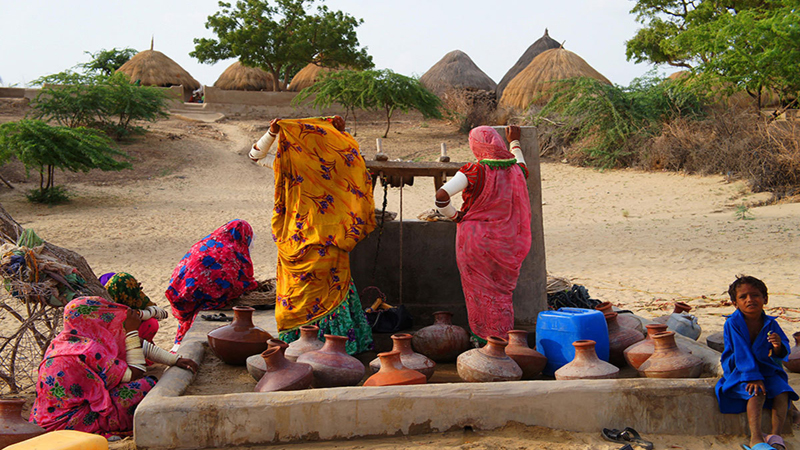 Tharparkar is spread over 22,000 square kilometers with a population of about 1.6 million residing in 2,300 villages and urban settlements. Divided into six talukasMithi, Islamkot, Chachro, Dihlye, Diplo and Nagarparkar. The region distinguishes by its low and erratic rainfall, high atmospheric aridity, abundant sunshine and heat. Strong dust-raising winds and sparse vegetation cover. High sand dunes and sandy plains cover 70% of its surface, and are ranked by the World Food Programme as the most food insecure of Pakistan’s 120 districts, and by UNDP as having the third lowest level of human development of all districts. However, the geo-physical foundation of Tharparkar features various ecological zones, which are different from the executive set-up. The ecological zones have their own scrupulous characteristics, which are described in prehistoric histories and tradition. The natural mechanisms, which predispose the ecological setup also, conclude human movement and behavior. It is therefore easy to understand the basic logic beyond the classification of Tharparkar stipulated by folk wisdom of the area. For pastoral Tharis, Tharparkar is a vast domain with different patches of water, rainfall, temperature, vegetation and soil. To generalize crudely, they have denoted such as Kha`ur, Kantho, Parker, Samroti,Vango, Vat, Muhrano and Dhat.

Kha`ur is north to Chachro approaching Kheensar, Gaddro and the area adjacent to them. The deep-water aquifers are available here below 1,200 feet. As a result of small sand dunes, flows of runoff water does not approach the plains and therefore minimise the opportunity for natural methods of collecting the surface water at large scale like in Traies or Tobha`s and smaller dia wells to tap seepage water. This backdrop also predisposes to less vegetation making a barren outlook of the sand dunes. Kantho ranging from Hirar union council in south of Chachro to Pillo, TigusarChotal and Mamchero union councils in north of Nagarparkartaluka. This zone is blessed with comparatively favorable physical conditions with aquifer availability on 150- 300 feet, fair precipitation, fertile soil and seasonal vegetation.

Thin fresh water layers and lenses often overlay brackish fluoride contaminated water. Wells of 3 to 4 feet dia found in this area. Parkar is distinguished from rest of the Thar by presence of Karoonjher hills and rocky plains. The monsoon precipitation runoff concentrates in channels and some recharge of aquifer occurs from stream flows. The low depth (10-30 ft) dug wells recharged through such streams provide water for drinking purposes and in some instances irrigate the seasonal kitchen gardening. However, the option of exploiting rainwater by collecting and controlling the surface runoff becomes limited since potential evaporation rates generally exceed precipitation. Wells of 4to 04feet dia are found in Parkar. Dhat forms central part of Thar covering a major portion of Chachro and northern areas of Mithitaluka. Above the main aquifer are up to four discontinuous perched aquifers tapped by many of the shallower dug wells when present. The surface runoff is limited; however, Tarais and Tabhas in low-lying strips provide drinking water following the rainfall. Vat is a short belt extending from southern parts of Diplo and Mithi to the marsh of Kutch. The better runoff and greater permeability provide a natural substitute for drinking water by recharging the thin fresh water layers on the depth of 20 -50 ft. The surface water percolation associated with different lower aquifer permeability predisposes salinity and thereby contributes the process of silting and Stalinization along the marsh line. Samroti is a small zone with fertile soil and shallow wells extending from south- west of Mithitaluka to northern Diplo, approaching to Vango. The availability of water and fodder provide better opportunity to the inhabitants to tender large flocks of goats and sheep. The northern portion of samroti is characterized by less precipitation and recharging, resulting in seasonal scarcity and lack of fodder.

Sometimes this portion is termed as Vango. Muhrano in ancient times was the name of area lying along with the shores of Mehran, when it used to flow across the eastern part of old Sindh.

Water, in general, is a scare natural resource and drinking water sources are extremely important for the basic survival of human beings as well as livestock in this region. Furthermore, availability of portable water has its own special consequence.

Kha’ur is north to Chachro approaching Kheensar, Gaddro and the area adjacent to them. The deep-water aquifers are available here below 1,200 feet. As a result of small sand dunes, flows of runoff water do not approach the plains and therefore minimise the opportunity for natural methods of collecting the surface water at large scale like in Traies or Tobha’s and smaller dia wells to tap seepage water

Thar Desert had been famous as one of the most fluoride-affected areas in the country. In the absence of public water supply, people were compelled to use groundwater which was brackish with high concentration of fluoride when surface water dried up, Fluoride causes dental and skeletal fluorosis, thyroid, and kidney problems when its concentration exceeds 1.5 mg/L in drinking water and the intake of excessive fluoride leads to chronic bone and joint deformations in skeletal fluorosis, for which early symptoms include sporadic pain and stiffness of joints and finally the spine, major joints and muscles, damaging the nervous system, Healthcare is a major issue in Thar.

The marginalized sections of society suffer the most. Poverty and malnutrition compound the problems. In many families, women and girls fetch water for the family every day from a long distance, from a communal source.

This takes hours, depriving them of profitable working time or education. Stable exciting and carrying of deep water pots cause health problems, particularly among pregnant women. The main crops grown in the area are millet, mung beans, bulgur wheat, chili and oilseed. These plants can tolerate dry conditions. However, in severe drought conditions yield of even these crops falls severely. Fresh fruits and vegetables are scarce. Straight years of low rainfall lead to scarcity of food and poverty. Fluorosis is irreversible and no remedy and treatment has so far been found except prevention by keeping fluoride intake within safe limits. Both dental and skeletal fluorosis not only affects the body of a person but also renders him socially and racially crippled. A joint study in 2010 by DUHS, the Pakistan Council for Scientific and Industrial Research and a local Organization Association for Water, Applied Education & Renewable Energy found over 80 percent of groundwater in the district unfit for human consumption Tharparkar District. It receives an average annual rainfall of only 100-300mm, hence the dependence on underground water. Another study conducted by Association for Water, Applied Education & Renewable Energy Underground Water Quality of Thar: A Detailed Analysis 2003-08, found more than 50 percent of the population using water with total dissolved solvents of over 5,000 mg per litre (mg/l). In one village in Naroowari, that figure rose to 20,000 mg/l, well over the World Health Organization (WHO) maximum limit of 1,500 mg/l. One major hazard is presence of fluoride (found up to 32 mg/l) in underground water of Tharparkar district.

There are various use models of water resources like open wells, rain water reservoirs, hand pumps and tube wells. Wells subsist more or less in all villages and are used for both irrigation and drinking water extraction. Wells are usually privately- owned, but frequently owned and Government owned are also in place. For centuries, the people of Thar have relied on the aquifers of ground water recharging from monsoon rains sporadic with periods of drought. The donkey/ camel power, rubber inner tube fashioned buckets, dug wells and varies have been evolved as the indigenous state of art to sustain and rationalize the over exploited and scarce aquifers. Government installed tube wells, and big River osmosis plant been installed have not proved to be entirely successful. Most such projects are not practical due to economic, technical and other reasons. Tharparkar requirements to be measured as a combined of assorted natural zones. The planning and possibility of water schemes would be diverse for different parts. Installation of defluoridation /fluoride ion removal and desalination plant. Artificial ground water recharge assumes especial attention through check dams etc Access of water should be made possible to all classes of community with common property rights

All interventions must be done with community participation to sustain the projects in long run. All the schemes/water interventions need to be design in a way that it can be affordable and accessible to community in terms of cost, maintenance, operation and social acceptance

Diversified projects may serve the purpose, rather than relying on one water resource

Private sector may be encouraged to support public departments in planning, designing and execution of water interventions

The writer is based in Umerkot and can be reached at anrahimoo@gmail.com