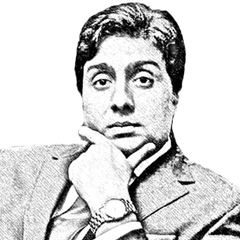 In democracy, the role of political parties is vital and vibrant. No democracy can survive and thrive without potent performance of political parties. With the help of political parties, the people are able to exercise their basic democratic rights. By contesting in elections, the parties offer citizens a choice in governance, and while in opposition they can hold governments accountable. Party system in western democracies especially in USA and UK has taken roots so much so that no alternative to political parties can even be thought of. The recipe to keep the democracy in restraint (in chains) is nothing but to weaken the political parties. Unfortunately, the same is being done in our beloved country despite the fact, it has long been decided by founder of Pakistan that democracy would be the destiny of Pakistan. Hence the political parties appear to be the custodian of the legacy bequeathed by the father of the nation.
In our country, the founding party Muslim League failed to win the confidence of its voters in Pakistan and a vacuum created. It resultantly led to the dismemberment of Pakistan. The lesson we learn from history is that there must exist a federal political party to strengthen the federation. In Pakistan, Zulifqar Ali Bhutto filled the political vacuum by founding the Pakistan Peoples Party on 30 November 1967. As a matter of fact its basic principles won the hearts and minds of the people in different provinces of Pakistan, which include:- Basic principles of  PPP enshrined:
Islam is our Faith. Democracy is our Politics. Socialism is our Economy.
All Power to the People.
Since the date the party has been founded, there is continuous as well as countless efforts to weaken its roots in the people. In this way, the perpetrators dug deep the foundation of the federation itself just to eclipse the PPP on the political horizon of Pakistan. PPP got landslide victory in West Pakistan in 1970 elections. First step was taken to restrict the popularity of Zulifqar Ali Bhutto who always went too far in serving the nation. Deliberate attempts, ranging for character assassination to physical assassination, were made to defeat Bhutto. In 1977, PPP was about to secure another victory when rigging allegation were levelled and PPP government under Zulifqar Ali Bhutto was removed by General Zia in consequent upon a coup. Not only his elected government was ousted forcibly but also he was got convicted by the Lahore High Court to create rift between the provinces of Pakistan. His daring daughter Benazir Bhutto took the bull by the horns and landed at Lahore just at the outset of her independent political career. The people flooded Lahore from all the nook and corner of Pakistan. At that time, she had option to bring bloody revolution in the country but she, like her father, believed in the democratic way for the change of regime which she, later on, did. Thus, she from the onset of her political career was awarded the title “the chain of four provinces.” In ‘reward’, the elections result of 1988 were engineered to prevent PPP from becoming single largest party in Punjab. For this purpose, they played brothery and ethnic cards, the parties having most heterogeneous ideas were yoked together to defeat PPP in election but they failed. PPP formed government in centre but PPP was not allowed to form government in Punjab. At that time, Punjab Government tried its level best to destabilize federal government. At last, Benazir Bhutto government became victim of 8th amendment. In 1990 elections, all the unfair means were used to keep Benazir Bhutto away from coming into power. The Asghar Khan case is itself an evidence in this regard. They sowed the seeds of hatred among federating units of the state in the name of provincialism.
Despite all such heinous efforts, PPP once again appeared as a single largest party in 2002. But this time, the PPP was split just to pave the way for the Kings party. In 2007 Election, there were clear signs for landslide victory of PPP. Now Benazir Bhutto was martyred in an act of terrorism and the chain to bind all the provinces of Pakistan was broken. Once again another body of national leader was consigned to Sindh from Rawalpindi, Punjab. This act gave a severe blow to national unity and impassioned people came out of their homes and filled the streets.  For three days, there had not been rule of law in the country. Now Asif Zardari came out to save the country with the slogan, ‘Pakistan Khuppy’. The use of brute force could not wean PPP out to play its historic character in national politics. Federation was saved once again. At this time, Bilawal Bhutto is out to save the fabric of federation. He raises his voice for the rights of FATA people; Baluchistan’s deprived folks, Punjab, Sindh Gilgit-Baltistan and Kashmir’s underprivileged people.

The questions arise: If Pakistan has to go forward as a federation, can it be run without federal political parties especially the one which has given constitution 1973, leadership one after another?

Constitutionally, Pakistan is a federation which requires at least a political party to have representation in all the federal units of the country. The role of all the parties is important but the federal parties are much more significant to bind the different federal units in a single chain. The same is the case in federation USA where their two-party system is able to strengthen the federal unity despite fifty different federal units. No doubt PPP has been playing the role of a federal political party in all circumstances. Now the nation’s interests and the party’s goals are so interwoven that you cannot damage the former without hurting the latter. The history witnesses that most of the parties in arena, nowadays, have either been founded by powers-that-be or work as their extension. Having no genuine vote bank, these parties have to play political gimmicks to attract sub-nationalities. On the other hand, PPP not only respect the voices of such sub-nationalities, also it binds them into Pakistani nationhood since PPP is the only party to do so. On all occasions, PPP has proved itself to be a federal political party. You can find its voters and supporters everywhere from Khyber to Karachi in great number. People’s party is considered the true representative of Pakistan both at home and abroad. The presence of Pakistan people’s party on national political scene is the evidence that the party is on true path. No lie can be a substitute to the truth and no party can replace  PPP. At this time, Bilawal Bhutto is out to save the fabric of federation. He raises his voice for the rights of Baluchistan’s deprived folks, Punjab, Sindh Gilgit-Baltistan and Kashmir’s underprivileged people.
But PPP and its leaders are at the receiving end as far as its relations with establishment and their representatives in government are considered.  At present, Pakistan Peoples Party is being targeted by the PTI government which has applied double standard in dealing with Mian Nawaz Sharif and President Asif Ali Zardari. The former despite his conviction from the court was allowed to avail all the medical facilities quite unique in the history of Pakistan. Former prime minister was sentenced to seven years in jail on December 24 last year. Pakistan’s top court approved bail on medical grounds for six weeks and the PTI government has allowed him to fly away in the name of medical treatment. It would not be wrong to say that the said leniency is unprecedented – the one which a convict never gets.
On the other hand, President Zardari is still in prison suffering health problems. But there is no sign of leniency in dealing with Mr. Asif Ali Zardari. The remand of Asif Zardari has ended, however the charges were not proved against him but he is still in jail custody. Furthermore, is it fair that a case which was registered in Karachi should be conducted in Islamabad? If PTI government does not show the same leniency, which was given to Mian Nawaz Sharif, it can at least give right to fair trial to President Zardari. If they cannot give a fair trial to ailing Zardari, they should be prepared to face the consequences which may be grimmest in the history of Pakistan since the health of President Zardari is deteriorating day by day in prison.
In fact, the true decision makers want to see President Zardari on its knees but they forget that President Zardari is brave man who cannot be defeated. This fact is acknowledged by the critics of President Zardari in the country. It would not be exaggeration to say that state of federation’s health is directly linked with Mr. Zardari’s health. Another wrong message from Rawalpindi could widen gulf between two major provinces of Pakistan by weakening the fabric of the federation.
Now doubt, the state’s soft hand on the former prime minister but a tight grip over former president proves that double standard is being applied in dealing with smaller provinces. The perpetrators are playing with fire which once spread, will never be extinguished since it is easier to set a forest on fire but hard to overcome it.

The questions arises: If Pakistan has to go forward as a federation, can it be run without federal political parties especially the one which has given constitution 1973, leadership one after another, political workers, best parliamentarians, democratic spirit and culture, political know-how and so on? Could you bring another true celebrated leader in Pakistan after assassination of Zulifqar Ali Bhutto and Benazir Bhutto? Of course not. You need to give a rethink to your policy of promoting Ladlas (pampered politicians). You helped promote a party in retrospect; now you are averse to its leadership and policies since it could not deliver and give proper results. Wouldn’t history repeat itself in future with regard to your pampered party and its leadership? The political puppet show must come to an end. Let the people decide their true representatives, their leadership and party to decide their fate and fortune. This is the nitty-gritty of PPP: All power to the people.