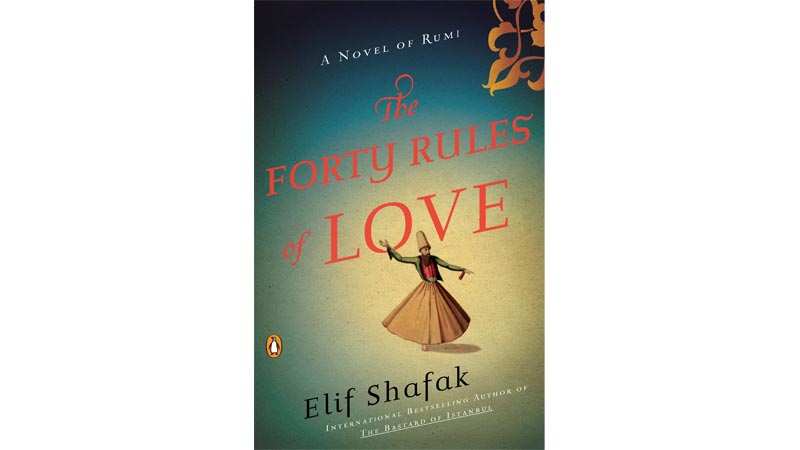 Forty Rules of Love is a novel written by a French-born Turkish writer Elif Shafak.

Elif Shafak is one of the most bravest and acknowledged authors and feminists in Turkey. And Forty Rules of Love is one of her bestseller novels.

The novel narrates two parallel stories. One story is about an unhappy Jewish housewife Ella, who works for a literary agency and another story is about a wandering dervish Shams of Tabriz. The story of Ella is the contemporary story of the novel which consists of two central characters Ella and Aziz. Ella happens to be an unhappy Jewish housewife as told earlier. She works as a review writer for a literary agency in Northampton, Massachusetts. The novel starts at the lunch table where Ella, her husband, and her kids were eating their lunch in the late afternoon on Saturday. They were all very quiet and busy eating their lunch. The silence on the lunch table was eating Ella from the inside, who was already bewildered and tired of her unhappy and love emptied life. Suddenly, her daughter Jeannette broke the silence and informed her parents about her decision to marry her boyfriend. Ella without any deferment rejected her daughter’s decision and went on eating her lunch. But Jeannette insisted that she loves her boyfriend a lot and wants to live with him. Ella ramped and scolded her daughter by listening so. Ella was extremely against love, as after her marriage she learned that love exists only when you are in a distance relationship, but once you meet each other and knot yourself in the relation of marriage, all love vanishes within few days and you start hurting each other. She already had the experience of temporary love that exists until only marriage, so, she did not want her daughter to experience the same. By the way, one day she received a task from her literary agency to read the novel “Sweet Blasphemy” and write a review on it. She started reading the novel and comparing it with her life. The novel was about a dervish and it was so interesting that she couldn’t restrict herself to contact the author. She started e-mail chats with Aziz, the author of Sweet Blasphemy, that lead her to an unexpected love bond between them both. After long time once again she felt the breeze and glitter of love in her life that she couldn’t deny. Love for Aziz showed her a new perspective of life and she felt a need for change in her life. And finally, one day she left her house, her husband and her children for the love that transformed her thoughts and ideas about this worldly love. She met her love and spent two years of her life with him, but, unfortunately, soon after Aziz became ill and died, and once again Ella was left alone. And she again felt the emptiness in her life.

Another story is about a wandering dervish Shams of Tabriz; the main characters of this story are Rumi and Shams. This is the story of the novel Sweet Blasphemy that Ella reads. The 40 rules of love are given in this portion of the novel. But these 40 rules are not about worldly love; these are about the love of God, the actual and supreme love

“Treasures are hidden among ruins. A broken heart hides treasures.”

Another story is about a wandering dervish Shams of Tabriz, the main characters of this story are Rumi and Shams. This is the story of the novel “Sweet Blasphemy” that Ella reads. Forty rules of Love are given in this portion of the novel. But these forty rules are not about worldly love, these are about the love of God, the actual and supreme love. Shams of Tabriz is a mystic Sufi who later feels the need of a companion to whom he can transfer his knowledge. For the sake of a companion, Shams travels from Samarkand to Baghdad to meet a famous Sufi scholar of that time Moulana Jalal-Uddin-Rumi. He travels to Konya the city where Rumi and his family lived. He meets Rumi and they become friends, on the other hand, Rumi also feels the importance of Shams in his life. Before Shams, Rumi used to be a renowned scholar who preached and taught people openly in mosques. But after meeting with Shams he holds up his speeches and teachings. He confines himself to the room and spends most of his time with Shams. With this Rumi starts losing his name and fame. And soon after people start hating Shams for transforming Rumi into a person that they never expected. The people of the town, Rumi’s fellowmen and his family, all start hating Shams. Time goes on and one day Shams decides to leave Rumi, he leaves Rumi’s house according to his plans. His departure in this way hurts Rumi a lot and conditions of Rumi become severe day by day that his son finds no way but to search for Shams and to bring him back. Shams returns and this time he gets married to Kimya, a student of Rumi. But due to the harsh behaviour of Shams, Kimya felt ill and finally she died. Her death inspires people of the town to kill Shams for they think Shams was only responsible for the death of Kimya. And finally one night a group of six bullies succeeds in killing Shams. They kill him and threw his dead body into well. Later on, Rumi learns about the departure of Shams, it hurts him a lot, he restricts himself to a room and starts saying poetry in the loneliness that Shams’ death gives him.

This was the whole story of Forty Rules of Love. The story of Shams is more interesting and easy to understand because it has a flow. And writer narrates this story by different characters, sometimes Rumi, sometimes Shams, sometime Kimya, sometime Sultan Walad and sometimes prostitute. So, it makes it easy to understand. Lastly, the novel is motivating and the forty rules given in it can be applied in daily life to cope with the hardest situations and to get the love of God.