Syria Kurds call up civilians to defend against Turkey

Kurdish forces took heavy losses in the US-backed campaign against the Daesh group in Syria which they spearheaded
Turkey has already carried out two cross-border offensives into Syria, including one in 2018 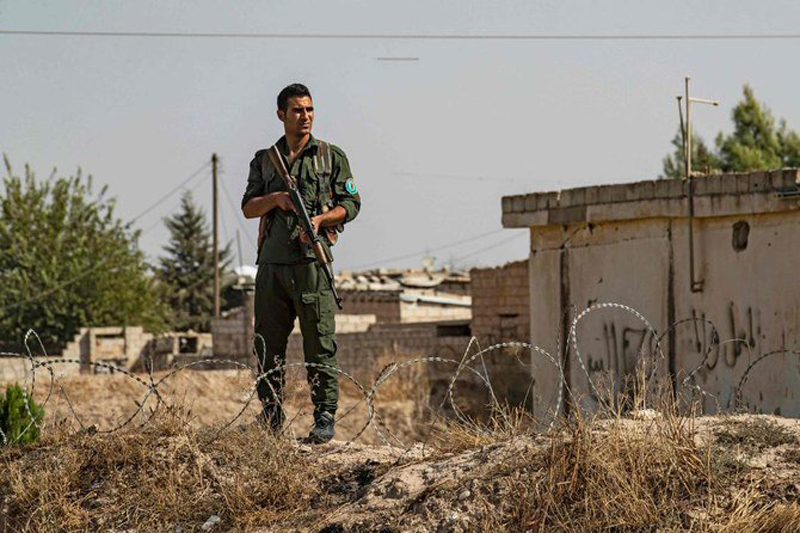 QAMISHLI: The Kurdish administration in northeastern Syria called up civilians on Wednesday to defend the region against a feared Turkish assault, believed to be imminent.
“We announce three days of general mobilization in northern and eastern Syria,” it said in a statement, urging all civilians to “head to the border with Turkey… to resist during this delicate historical moment.”
It also called on Kurds in Syria and abroad to protest against Ankara’s planned offensive. Ankara said on Tuesday it would “shortly” begin an offensive into northern Syria, as it sent more armored vehicles to the border.

Meanwhile, Iran’s President Hassan Rouhani called on Turkey to show restraint and avoid military action in Northern Syria, and said US forces should leave the region.
“Turkey is rightfully worried about its southern borders. We believe that a correct path should be adopted to remove those concerns… American troops must leave the region… Kurds in Syria… should support the Syrian army,” state news agency IRNA quoted Rouhani as saying.
Turkey’s communications director, Fahrettin Altun, wrote in the Washington Post that Kurdish forces can either “defect” or Turkey will “have no choice but to stop them from disrupting our counter-Islamic State efforts.”

The head of the Arab League said he is alarmed at Turkey’s planned military offensive into northeastern Syria, against the Syrian Kurdish fighters there. Ahmed Aboul Gheit said in a statement on Wednesday that such an invasion would be a “blatant violation of Syria’s sovereignty and threatens Syria’s integrity.”

He added that Turkey’s planned incursion also threatens to inflame further conflicts in eastern and northern Syria, and “could allow for the revival” of the Islamic State group. Turkey has been preparing for an attack on the Kurdish fighters in Syria whom Ankara considers terrorists allied with a Kurdish insurgency within Turkey.