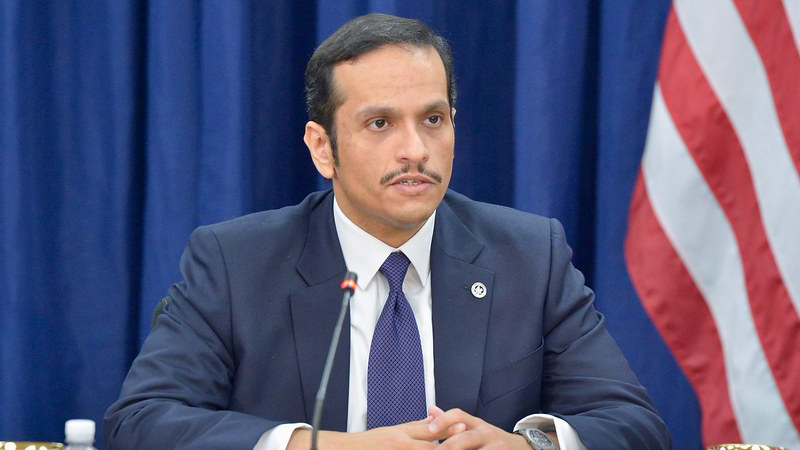 As the Taliban and US are believed to be closer to a landmark peace deal to end the America’s longest war in Afghanistan, Qatari Foreign Minister Sheikh Mohammed bin Abdulrahman Al Thani has met the Taliban and the US negotiators ahead of the finalisation of the agreement.

Sources privy to the ongoing negotiations in Doha said the Qatari foreign minister separately met the Taliban and the US officials late Saturday as the warring sides are struggling to remove differences on remaining issues, including ceasefire.

Qatar is the only country attending the talks which started in October to find out a political solution to the conflict in Afghanistan. A Taliban official said the draft of the peace agreement is also being written by the Qatari officials.

When the Taliban and the US concluded eighth round of talks this month, Qatari officials wanted the ninth round to be held as soon as possible so that both sides finalise and sign the deal in Qatar, where the Taliban have political headquarters, according to a Taliban official.

Taliban political spokesman Suhail Shaheen denied as ‘false’ reports that the Taliban and the US have reached an agreement on the establishment of an interim set-up for 14 months.

Taliban have long been claiming that the issue of interim government has never been discussed and that the focus has been only on two issues: withdrawal of foreign forces and Taliban assurance to stop use of Afghan soil for terrorism against the US and its allies.

Shaheen said in reported comments that the Taliban and the US have reached agreement on a timeframe for the troop withdrawal. However, he did not offer more comments.

A Taliban source, who has knowledge of the eighth round concluded earlier this month, said head of the Taliban political office Mullah Abdul Ghani Baradar has offered 14 months for withdrawal of all foreign troops.

Taliban chief negotiator Sher Abbas Stanekzai told a gathering in Qatar to mark Afghanistan’s 100 year anniversary that foreign forces will soon quit Afghanistan. “Americans have faced defeat and will flee from Afghanistan after 18 years and I am confident that the Americans will soon leave Afghanistan,” Stanekzai said. A video of his Pashto speech has been posted online.

“I assure the people of Afghanistan that there will be no civil war in Afghanistan after the peace agreement is signed,” Stanekzai said, in an effort to remove concerns about internal hostilities in Afghanistan as Afghan government is not part of the negotiations and the possible US-Taliban deal.

The Taliban will join intra-Afghan dialogue within two weeks after they finalise agreement with the US to discuss the future set-up in the war-shattered country.

Taliban former ambassador Mullah Abdul Salam Zaeef says Taliban and the US have resolved differences and that both sides will ink the deal in the next few days.

Zaeef told Tolo TV in Kabul that the US and the Taliban have agreed on a full withdrawal of foreign forces in 15 to 24 months and on counter-terrorism assurances.

As the Taliban and the US are closer to a deal, fate of the upcoming presidential elections is not clear as incumbent President Ashraf Ghani is adamant to hold the elections next month.

Statement of Ambassador Bass is a clear indication that Washington attaches more importance to peace deal with the Taliban rather than the elections scheduled for September 28. US peace envoy Khalilzad has also offered similar comments in Qatar in July when the Taliban joined Afghan political leaders at an intra-Afghan conference.