The paramount significance of Mecca and Medina

* Muslims associate a special sense of spirituality with these two cities 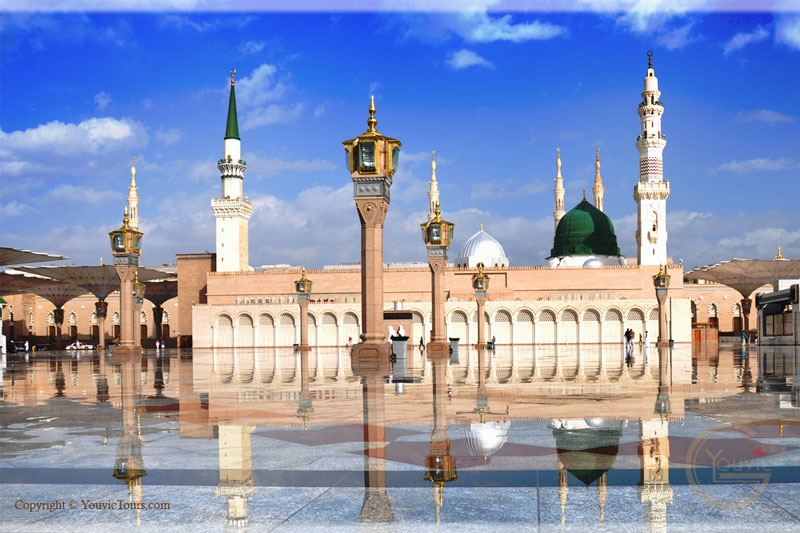 Saudi Arabia, a country in the Middle East is a spiritual haven for Muslims across the globe. It is largely because of Mecca and Medina, which are deemed to be sacred cities, cherished by a billion Muslims across the globe. Mecca is home of the Kaabah situated in Masjidul Haram. It is a cubical building, which was initially built by Prophet Ibrahim, and his son, Ismaeel. Madinah is the house of tomb of Holy Prophet (PBUH),the final Messenger of God. The twin cities of Makkah and Madinah are off-limits for non-Muslims.

Muslims associate a special sense of spirituality with the cities of Makkah and Madinah. An overwhelmingly emotional feeling encompasses a believer upon entering these cities. Muslims belonging to all races, ethnic origins, nationalities and other demographic cohorts visit these places for umrah (smaller pilgrimage) and Hajj. A sense of unity and spirituality is a lot widespread at the time of Hajj when about 3 million Muslims gather for a collective and a deeply personal experience in which all people are deemed to be equal before Allah Almighty.

Several historical sites and mosques add to the significance of Makkah and Madinah. Pilgrims to Makkah have at their disposal a sacred Mosque of Aisha about 5 kilometres away from Masjidul Haram. The sites of Mina, Muzdalifah, Jamaarat at Mina, Arafat, Jabal-e-Rahmah (Mount of Mercy) are prominent ones in the outskirts of Makkah. Usually, pilgrims coming to perform umrah visit these sacred sites. It orients them about the places for performing Hajj in the future. Pigeons are prevalent everywhere in Makkah, its vicinity and in its outskirts. Jabal Al Noor is also of salient importance, and it houses Cave of Hira where Holy Quran was revealed to Holy Prophet (PBUH). Jabal Al Sawr is also of utmost significance as in it is a cave of Sawr where Holy Prophet took refuge from Quraish during migration to Madinah.

Several historical sites and mosques add to the significance of Mecca and Madina. Pilgrims to Mecca have at their disposal a sacred Mosque of Aisha about five kilometres away from Masjidul Haram. The sites of Mina, Muzdalifah, Jamaarat at Mina, Arafat, Jabal-e-Rahmah are prominent ones in the outskirts of Mecca. Usually, pilgrims coming to perform umrah visit these sacred sites

Holy Kaabah in Masjid-ul-Haram in Makkah holds supreme importance. Near to it is the station of Abraham, which contains footprints of Hazrat Abraham (A.S).

Mountains of Safa and Marwa add to significance of sacred Makkah as pilgrims take seven rounds between them after performing circumambulation of Holy Kaabah.

Madinah’s special importance is associated with Mosque of Prophet where Prophet Muhammad’s (PBUH) tomb is located. Close to his grave in Prophet’s Mosque is Riyad-ul-Jannah; which is a garden of paradise located on the earth. It is located between chamber of Hazrat Aisha where Holy Prophet lived and his minbar(pulpit) of the mosque from where Holy Prophet delivered sermons. Besides, Prophet’s grave in Masjid-e-Nabwi are the graves of two noble companions of Holy Prophet namely Hazrat Abu Bakr and Hazrat Umer.

Several places in the outskirts of Madinah add to its importance such as the mountains and battlefields of Uhud. The mountains of Uhud are considered as mountains of heaven and next to it is the graveyard of martyrs of Uhud including Hazrat Hamza; who was uncle of Holy Prophet (PBUH). Mosque of Quba located in Madinah holds salient importance in Islamic history because it has been the first mosque of Isamic history. It is another major attraction for the pilgrims in Madinah.

Besides, Mosque of Qiblatain is also of much importance in Madinah where Holy Prophet was directed to change the direction of the qiblah from mosque of Jerusalem to Holy Kaabah in Makkah. Mosque of Ghamama where Holy Prophet (PBUH) performed Eid salah during last four years of his life.

Jannat-ul-Baqi (garden of heaven) in Madinah is the main cemetery where many members from Prophet’s family including beloved wife of Holy Prophet; Hazrat Aisha is buried.