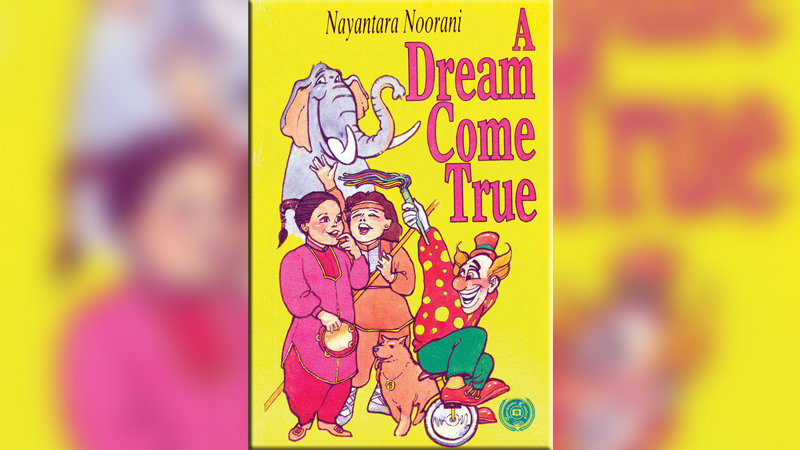 The book A Dream Come True is a beautifully written tale by an appreciated writer Nayantara Noorani. The writer has written the book at a very little age. The book is a very beautiful story of an orphan girl Sara who puts the readers in suspense about her dreams.

A woman called Mrs Irum Shaukat adopts her from the orphanage but she has her own daughter Hina as well. Hina always fights with Sara but she does not say anything it is not her own house and Mrs Shaukat is not her own mother to complain about Hina. Sara life continues the same until she has not met Sonia. Once Sara would be coming from bazaar she sees the posters of Kamran’s circus which is one of the best circuses. She dreams to be most famous star of the circus and she believes that her dream would come true. But we readers can’t expect her dreams to come true as she is not allowed to do anything according to her own wish. The most shocking part of the book is that Sara dreams to have her own parents which is impossible for an orphan to have her own parents.

So, the book suggests that if we believe in our dreams and work hard to make them come true, then they are bound to come true, as our dreams require faith, belief and focus in order to come to life

A day brings a huge change in Sara’s life when she meets Sonia in the circus due to Bozo. Sara and Sonia become very good friends as Sonia trains her over the tricks she uses with the ring and Sara gets them easily. However, when Hina gets aware of it, she feels jealous and says some bad words about Sara’s parents on which Hina slaps her. Mrs Shaukat punishes Sara, keeps her in the garden and does not allow her to come in the house. Sara goes to a circus to meet Sonia where she gets to know that the circus is going to be shifted and Sonia has gone shopping with her mother. She sits in a caravan of chairs and cries and gets sleep. When she wakes up, she feels that she’s moving and after sometime, they reach Karachi. Then Sara and Sonia ask Mr Kamran if Sara could work with them until they are in Karachi. Mr Kamran agrees but he thinks to back Sara when they go to Thatta again.

In the first performance Sara and Sonia wear pink dress with pink wings they don’t look less than two little fairies. Everyone becomes their fan and they became famous everywhere with the name of ‘ two little fairies ‘. When circus again comes to Thatta then Mr Kamran goes to back Sara to Mrs Shaukat. But he sees she left her house and no one knows where she has gone. Mr Kamran takes Sara to the orphanage where he finds out that her real name is Sara Shamsi. He tells the lady in-charge that Sara is the daughter of his sister Aliya. He shares her story with the lady in-charge that when would be three months old her parents get divorce and Sara would be given to the custody of her father. As her father can’t take care of her he keeps her in the orphanage. After this all story court again gives Sara to the custody of her mother and they live happily.

So, the book suggests that if we believe in our dreams and work hard to make them come true, then they are bound to come true, as our dreams require faith, belief and focus in order to come to life.