Vaadhoo Island has a sea full of stars

* This gorgeous, glowing beach of the Maldives is a tiny island with only 500 inhabitants 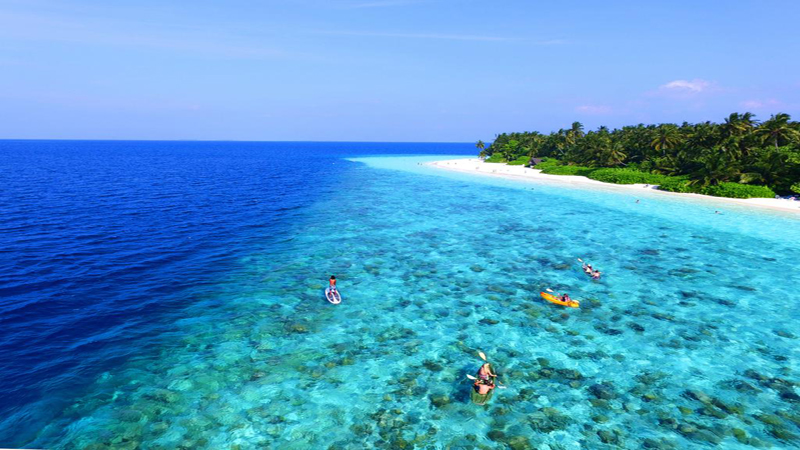 There are resplendent and wondrous landmarks in the world which can bewitch you. These turning points marvel you with their beauty. The gripping locations make you stop and praise Mother Nature. These destinations may look like something of a fairytale or a heaven on Earth and stay in your memory forever.

One of those magnificent and splendid spots is Vaadhoo Island in Maldives.

It conjures up the dream of paradise featuring a perfect patch of sand where you can relax under rustling palms and gaze at a serene blue light and the sheer majesty and magic of the island itself. This gorgeous, glowing beach of the Maldives is a tiny island with only 500 inhabitants.

The panorama of the beach is just awe-inspiring at night and the glowing view is worth a watch.

The shining and glinting beach at night is due to a natural phenomenon called bioluminescence owing to a creature that emits light and incandescent the beach.

The sparkling is caused by the distribution of oxygen with micro-organisms.

The process of illumination occurs when the planktons float as a result a signal is transmitted due to the movement of water.

The electrical signal is sent to the proton ion channel of scintillon of dinoflagellates.

The proton ion flow in scintillon creates a chemical reaction which activates a protein called luciferase.

Luciferins with luciferase in scintillon when joined with oxygen, a blue neon light is called into existence which glitters when each wave breaks.

These dinoflagellates or phytoplankton radiating blue light is kind of a defence for them. 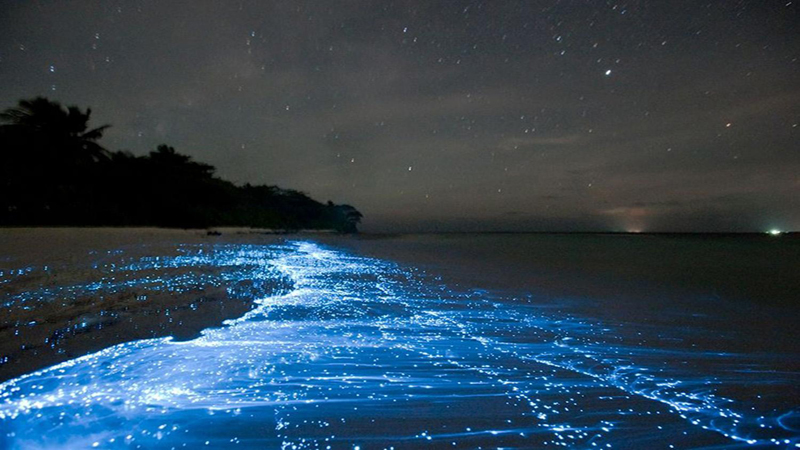 The illumination of blue light does not mean these creatures are amiable, but they produce toxins which are harmful to fish, human and other marine organisms.

Dinoflagellates aren’t the only ones which produce bioluminescence, but there are some other marine organisms like krill, deep-sea squids, and anglerfish which also produce light in their own way.

The striking view can be best seen in moonless nights.

According to locals, the outstanding view is more prevalent from late summer until end of year.

Reaching Vaadhoo Island isn’t a hard task at all.

It is 8 kilometres away from Male. The tourist can reach within 15 minutes through a speedboat. The travellers should wait until the dawn to catch the glimpse of phenomenal view of the beach with candent of blue light.

The sight seems just like that stars are coming down to grace the ocean with their presence.

You can walk along the beach and leave your gleaming footprints which are washed by every wave coming to the shore.

Vaadhoo is one of the inhabited islands of Raa Atoll, Maldives.