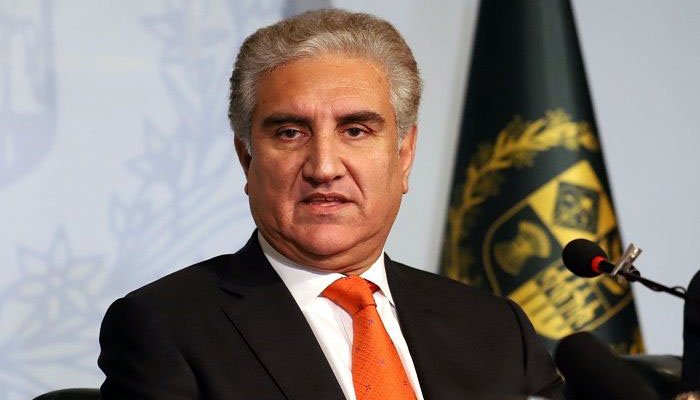 In an interview with the news outlet on Friday, Qureshi said progress in the ongoing talks in Doha will establish ground for a meeting between Prime Minister Imran and US President Trump. When asked if headway in the talks is a precondition for meeting between the two leaders, the foreign minister said, “Don’t call it a condition but I think that the environment [for the meeting] will be more favourable if the talks move forward.” “Both [PM Imran and President Trump] are important personalities, and [both are] deeply interested in [establishing] peace and stability in the region,” he continued. “There has been progress [in establishing peace and stability in the region] and [US-Taliban] talks are underway in Doha. There are chances of further progress in talks [that] can lead to a new opening in our [Pak-US] bilateral relations,” he added.

Qureshi also talked about relations with Tehran and said that ‘some powers keep trying to create misunderstandings between Pakistan and Iran in order to fulfil their own agendas’. “Whenever attempts are made [to create misunderstandings between the two sides], Pakistan and Iran defuse them through bilateral talks on the level of security and intelligence agencies,” he said. “These are the powers which consider Iran a threat for the region and want to degrade it [in the region],” he said. When asked if he was pointing towards the US, the foreign minister said he will not name anyone.

Referring to security threats faced by Saudi Arabia, Qureshi said, “Pakistan stood by the kingdom whenever it was threatened and will continue to do so”.

The foreign minister said a Pakistani delegation is currently in China to brief the Financial Action Task Force (FATF) over the steps taken by Pakistan to curb terror financing and money laundering. He expressed the hope that the international body will remove Pakistan from its so-called ‘grey list’ when the FATF meeting is held in June.

Addressing the visa sanctions that Washington imposed on three government officials earlier this week due to a row over repatriation of deportees, Qureshi said the restrictions are ‘temporary’. “We have resolved the deportation issue to a large extent and this temporary restriction [over visas] will also end soon,” he added.

Meanwhile, Foreign Minister Shah Mahmood Qureshi arrived in Kuwait on Saturday on a two-day official visit to hold talks with the Kuwaiti leadership. During his stay, the foreign minister will hold talks with his Kuwaiti counterpart on the entire spectrum of bilateral relations.

Talking to media persons before his departure at the Islamabad airport, Qureshi said he is carrying a special letter of Prime Minister Imran Khan for the Emir of Kuwait Jaber Al-Ahmad Al-Sabah. He expressed the confidence that his visit will help further strengthen relations between Pakistan and Kuwait. He added that visa matters along with bilateral issues will come under discussion during his visit.