* Offer stands until June for all filer Pakistanis across the globe except public office holders, their dependents
* Dr Shaikh says scheme not aimed at generating revenue or intimidating people but to document economy
* Overseas Pakistanis to pay 6 percent tax in case they deposited their money in foreign banks 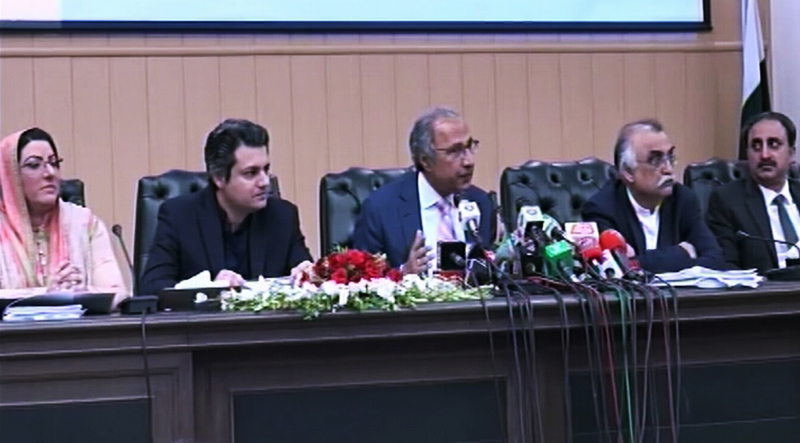 The incumbent government on Tuesday announced the Asset Declaration Scheme, providing one more opportunity to all Pakistani citizens to declare and legalise undisclosed assets inside and outside the country by paying just four percent taxes on all assets other than real estate.

The scheme would be applicable till June 30, and all Pakistan citizens, other than those holding public offices or their dependents, would be able to take benefit from it, Adviser to Prime Minister on Finance Dr Abdul Hafeez Shaikh said at a press conference while announcing the scheme after its formal approval by the federal cabinet.

He was accompanied by Special Assistant to the Prime Minister on Information and Broadcasting Dr Firdous Ashiq Awan, State Minister for Revenues Hammad Azhar and Federal Board of Revenue Chairman Syed Shabbar Zaidi.

Dr Shaikh said the basic purpose of the scheme was not to generate revenue but to document economy and make the dead assets functional to promote economy. He said the philosophy behind the scheme was to encourage businessmen to participate in the legal economy, adding that it did not intend to intimidate people.

He said efforts had been made to make the scheme easy in understanding as well as implementing.

He said all assets were included in the scheme inside or outside Pakistan, and added that people would have to pay four percent tax to get all their assets, other than real estate, legalised.

In case of real estate, it would be evaluated at 1.5 on FBR value, to bring it to market value, he said, citing an example that if the FBR value of any property was Rs 1 million, it would be charged at the value of Rs 1.5 million.

Dr Shaikh said every Pakistani national was eligible to benefit from this scheme; however, the scheme would not be applicable to the public office holders and their dependents.

He said this was the last chance as the government had already imposed the “benami law”, under which all such benami properties would be confiscated by the government.

Replying to a question, he said talks between Pakistan and the International Monetary Fund (IMF) continued for around 7-8 months and nothing special was added in the agreement after he joined the office.

“The IMF is an international institution, which primarily focuses on bringing the financially weak countries out of financial crisis, and the conditions set … [by the IMF] for Pakistan are in its own interest,” he said, adding that whether it was the condition of shrinking trade deficit or reducing expenditures and increasing revenues, or selling out the bleeding state own entities, all such conditions were aimed at stabilising the country’s economy.

When asked whether this would be the last programme with the IMF, the adviser said that in the past, the governments could not fulfil the conditions of the IMF, which resulted in instability of the economy, but this time the government was committed to abiding by all the conditions and hoped that the country would not need to go for another programme.

He said the electricity tariff would be increased for only those consumers who used 300 and above units per month, while the rest of the 75 percent consumers would not be affected by the power tariff raises.

He informed that in the upcoming budget, the government was raising the budget for the downtrodden segment of society and allocating Rs 180 billion as compared to Rs 100 billion in the previous year for the purpose. Dr Shaikh said under the Public Sector Development Programme (PSDP) 2019-20, the government would allocate Rs 550 billion to Rs 600 billion, while in the next year this budget would be increased to over Rs 700 billion, which would help generate new jobs. He said the revenue performance had not been so good in the past, but now the government was taking some basic measures that would help take the revenue level to record high in coming years.

Speaking on the occasion, Hammad Azhar said there was a lot of difference between the current and previous amnesty schemes, as for the first time there was a condition for all asset declarer to become tax filers, besides giving option to all such people to revise their balance sheet in their tax returns.

Meanwhile, briefing the media on amnesty scheme, Dr Firdous Ashiq Awan said the ordinance on declaration of assets would be issued by the president as part of the government’s efforts to document the economy and generate taxes from privileged sections of society.

She said the cabinet renewed the licence of the Pakistan International Airlines (PIA), approved Board of Directors of the Pakistan Tourism Development Corporation (PTDC), ratified Pakistan’s trade agreement with Algeria, approved exemptions for assets belonging to institutions of Benevolent Fund and Group Insurance.

She said the cabinet considered the strategy to keep daily use items’ prices in check by curtailing the role of the middlemen through a system of magistrates and market price committees. She said the media would be informed in a briefing about the steps taken by the government to provide cheap and quality medicines by bringing reforms in the Drug Regulatory Authority of Pakistan (DRAP).