Our options in fisheries

Human body requires healthy food. Fish meat is highly valuable on account of the nutrients it carries. It is a low-fat high-quality protein filled with omega-3 fatty acids and vitamins D and B2 (riboflavin). It is rich in calcium and phosphorus and a great source of iron, zinc, iodine, magnesium, and potassium.

Fishery has a significant role in the national economy. It directly employs about 300,000 fishermen. Another 400,000 people are employed in its allied industries. It is also a major source of export earnings. In July-May 2002-03 fish and fishery products valued at $117 million were exported from Pakistan.

Federal government is responsible for fishery in Pakistan’s exclusive economic zone. It is also responsible for making policies, inter-provincial co-ordination, planning, research, quality control, training, exploratory fishing, stock assessment, fisheries management, fleet improvement, data collection, and export. Pakistan is blessed with a rich fishery potential. It borders the northern part of the Arabian Sea and has a coastline of about 1,120 kilometres with a broad continental shelf. Its exclusive economic zone extends up to 200 nautical miles from the coast. About 16,000 fishing boats operate in Pakistan’s coastal area. Depending upon the type of fishing,the fishing trips last from a few hours to several weeks. Pakistan’s total fish production, from inland as well as marine waters, is approximately 600,000 tonnes. 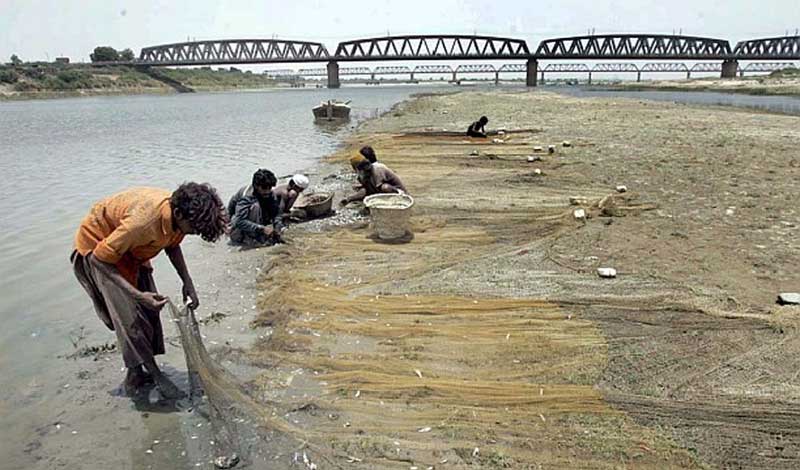 In the province of Sindh, Thatta and Badin districts are highly suitable for aquaculture. Vast land areas with ample water supply, suitable soil, extensive irrigation and drainage networks and a perfect climate make this area highly suitable for the culture of several fish species.

Presently fish farming in Sindh is limited to small scale and the two districts. There are scattered fish ponds in Sanghar. Given the vast resources at hand, Sindh can be the leader in aquaculture industry in Pakistan. However, this requires awareness and encouragement. There is a dire need to first understand the basic requirements for aquaculture. Several thousand acres of land suitable for aquaculture are available in Thatta and Badin districts at a cost of Rs 20,000 – Rs 30,000 per acre. The soils are nutrient-rich and slightly alkaline. The existing water bodies are all habitat to highly valuable fauna and flora required to feed various fishes.

Pakistan has the most extensive networks of irrigation canals in the world. Surface water of good quality is available for 10 to 11 months a year. It has a pH value of 7.5 and temperature ranging between 28 and 37 C. Biotic and abiotic factors are highly supportive of fish farming. However, due to recent climatic changes, irrigation water has been in short supply since 1999.

The government is ready to support fish farming. Loans are easily approved, and permits easily granted by the Fisheries Department. Moreover, water bodies in Thatta and Badin districts are virtually pollution free, labour is cheap, available at Rs5,000 to Rs 7,000 per month. The weather is favourable for optimum growth rates for nearly 10 months a year.

A lack of quality hatcheries is one of the factors impeding the growth of fish farming. There is also room for introducing genetically improved, fast-growing and disease resistant fish species such as Tilapia, Rohu, Mrigal, and Catla.

There is not a single feed mill for the aquaculture industry in Pakistan. Fry, fingerling and sometimes grow out fish are fed with balls made from rice bran and cotton seed cake. Most fish feeds can be prepared locally for less than 50 per cent of the cost of imported feeds. Setting up feed mills can also help lower unemployment.

Kenjhar lake near Thatta, having an area of 50 square kilometers and a depth of 25 to 35 feet is one of the largest lakes in Pakistan. It may be ideal for cage aquaculture for trout fish.

Besides, Pakistan has a 1,120 km long coastal line covering Badin, Thatta, Karachi, Pasni, Gwadar and Ormara districts with a great potential for brackish water aquaculture and mariculture. There have been a few failed attempts to culture shrimps without a hatchery and a feedmill. Shrimps are also hard to acclimatize.

There is not a single feed mill for the aquaculture industry in Pakistan. Fry, fingerling and sometimes grow-out fish are fed with balls made from rice bran and cotton seed cake. Most fish feeds can be prepared locally for less than 50 per cent of the cost of imported feeds

The State of World Fisheries and Aquaculture 2018 highlights the critical importance of fisheries and aquaculture for the food, nutrition and employment of millions of people, many of whom struggle to maintain reasonable livelihoods. The report says total fish production in 2016 reached an all-time high of 171 million tonnes, of which 88 percent was utilized for direct human consumption, thanks to relatively stable capture fisheries production, reduced waste and continued aquaculture growth. This production resulted in a record-high per capita consumption of 20.3 kg in 2016. Since 1961, the annual global growth in fish consumption has been twice as high as population growth, demonstrating that the fisheries sector is crucial in meeting FAO’s goal of a world without hunger and malnutrition. While annual growth of aquaculture has declined in recent years, significant double-digit growth is still recorded in some countries, particularly in Africa and Asia. The sector’s contribution to economic growth and the fight against poverty is growing. Strengthened demand and higher prices increased the value of global fish exports in 2017 to $152 billion, 54 percent originating from developing countries.

During eight months of 2017-18, a total of 108,262 metric tonnes of fish and fishery products were exported. Pakistan’s major buyers are China, Thailand, Malaysia, Middle East, Sri Lanka and Japan.

In 2001, more than 80 per cent of the total world import value was concentrated in developed countries, in Japan, the USA and in several EU countries. Japan has remained the major importer accounting for about 23 per cent of the total import value. USA was the second main importer with a share of 17 per cent, followed by Spain, France, Italy, Germany, and the UK. About 74 percent of world fish production is used for direct human consumption, whereas the remainder (about 26 percent) is utilized for various non-food products, mostly for conversion to fishmeal and oil.

Pakistan has a total coastline of 1,090 km and a total fishing area of approximately 300,000 sq. km. Pakistan’s fishing waters are highly rich in marine life with a vast variety of species having commercial value. However, this potential is not reflected in the export earnings from the fisheries sector. The exports of fish and fish preparation stood at $134.5 million (with a volume of 93,214 tonnes) in 2002-03.

Pakistan’s export of fishery products stands at about 0.25 per cent of world exports. A rough estimate based on maximum sustainable yield figures, existing value addition, and foreign benchmarks, puts our total export potential from this sector at around $1 billion from existing natural resources. If we include the high potential area of aquaculture, our fisheries sector can yield even higher export earnings.

Pakistan’s domestic consumption is termed as one of the lowest in the world, at 1.6 kg per person per year (compared to a world average of 16.2 kg per person per year). Hence, most of the produce is exported. There is a great dependence on a few species for exports, with very little value addition. Most of the fish catch is from marine sources, which comprises about 70 per cent of total fish exports. Pakistan exports fish mainly to Europe, the US, Japan, and Middle-Eastern countries. On the coast of Pakistan, there are more than 30 species of shrimps, 10 species of crabs, 5 species of lobster and about 70 commercial species of fish including sardine, hilsa, shark, mackerel, butterfish, pom fret, sole, tuna, sea bream, jew fish and cat fish, shark, and eel. Marine fishing is undertaken from right beyond the coast to 200 nautical miles into the sea.

Pakistani fish is exported to nearly 50 countries around the globe. Unfortunately, most of the attention has been on agri-farming, farming of livestock animals i.e. sheep, goat, cattle and buffalo including poultry. There is a huge potential in fisheries and aquaculture, which has been largely ignored.

Published data is enough to convince one that fish is a highly healthy food. It is high in important nutrients including high-quality protein, iodine and various vitamins and minerals. Fatty types of fish are also high in omega-3 fatty acids and vitamin D. Fish may lower one’s risk of heart attacks and strokes. Eating at least one serving of fish per week has been linked to reduced risk of heart attacks and strokes, two of the world’s biggest killers. Fish contains nutrients that are crucial during development. Fish is high in omega-3 fatty acids, which is essential for development of the brain and eyes. Fish is a source of vitamin D and good for healthy bones. Fish consumption is also linked to reduced risk of autoimmune diseases, including Type 1 diabetes. Eating fish has been linked to a reduced risk of Type 1 diabetes and several other autoimmune diseases. Fish may help prevent asthma in children. studies show that children who eat more fish have a lower risk of developing asthma. Fish may protect your vision in old age. People who eat more fish have a much lower risk of developing macular degeneration, a leading cause of vision impairment and blindness.

Fisheries and aquaculture have a great role in supporting farm families and the national economy. Most of the population of the coastal areas of Sindh and Balochistan depends on fisheries for livelihood. It is also a major source of export earnings. Nearly 16,000 families are involved in fish industry in coastal areas alone. The government should pay more attention todevelopment of fish industry.

The writer is a professor at Sindh Agriculture University