Pakistan will continue to play role in war on terrorism: Alvi 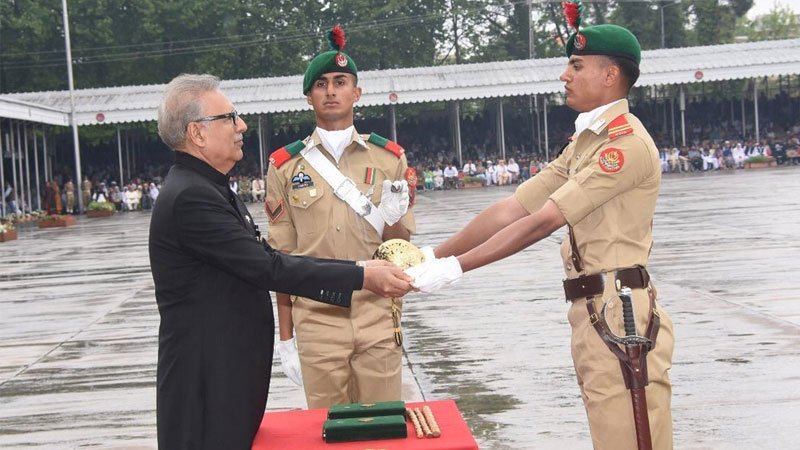 President Arif Alvi said on Saturday that the successes achieved by the Pakistan against the scourge of terrorism have no parallel in the contemporary world.

“This is despite the fact that the challenges and complexities faced by Pakistan were immense and growing,” he said while speaking as chief guest at the passing out parade held at the Pakistan Military Academy Kakul, according to a statement issued by the military’s media wing, the Inter-Services Public Relations (ISPR).He further added that the successes achieved by Pakistan against the scourge of terrorism have no parallel in the contemporary world

The president said that Pakistan’s armed forces are highly motivated, battle-hardened, and fully aware of the multitude of the threats from overseas. “Let there be no doubt that any misadventure and even the slightest breach of our national security will get a befitting response and no sacrifice will be considered too great in accomplishing this sacred cause,” he remarked. “I have no doubt that Pakistan’s armed forces are capable of deterring and defeating aggression in any form,” he said, adding that the recent stand-off on the country’s eastern front is a testimony to this fact.

The president said Pakistan will continue to stand by its Kashmiri brethren in their legitimate struggle for the right to self-determination. “While we continue our political efforts to find the solution to this conflict, we will leave no stone unturned in exposing the suppressors of innocent Kashmiris,” he pledged. “I urge the world powers to take stock of the plight of the Kashmiri people in the light of the resolutions of the United Nations Security Council,” he added.

The president said the country wants ties with its neighbours based on equality and mutual respect. “Pakistan has and will always remain a promoter of peace as part of its national policy,” he said, adding that Islamabad is a participant of the global war against terrorism and will continue playing its due role.

The Cadets 139th PMA Long Course, the 9th Mujahid Course, the 58th Integrated Course and the 14th Lady Cadet Course have completed their training. Cadets from Saudi Arabia and Sri Lanka were also among those who passed the courses.