‘Baydardi’ sheds lights on the taboo behind AIDS 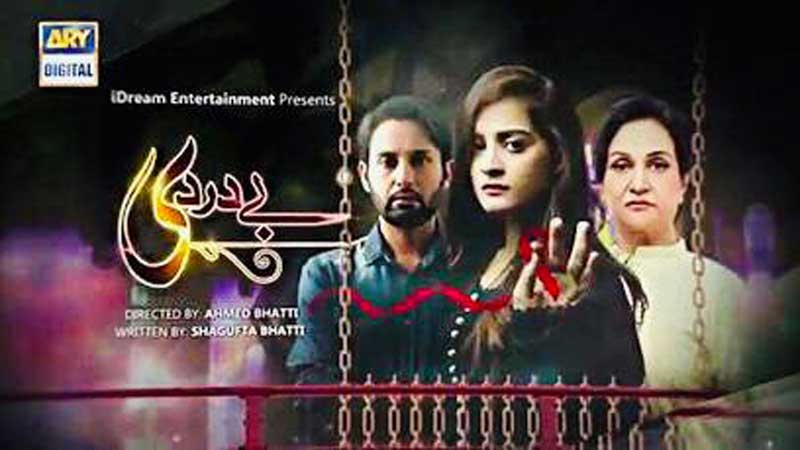 ‘Baydardi’ is one of the most popular and successful Pakistani drama serials which ran from March 26 to August 27, 2018 with a total of 29 episodes. The popular drama serial was written by Shagufta Bhatti, produced by Abdullah Seja and directed by Ahmed Seja. Affan Waheed played the role of Shafay and Aiman Khan enacted the role of Bia. The story revolves around the deadly disease HIV AIDs which is considered a taboo in the Pakistani society. Pakistanis’ conception about HIV AIDs is that it’s only transferred by sexual contact whereas this drama highlights that it cannot be transferred only sexually but also through sharing injections, unhygienic tools used during child delivery, contaminated blood transfusion and sharing razors, etc.

Shafay is a simple and a cultured man who belongs to a decent family while Bia is an innocent girl coming from a middle class family. Hence, Shafay will be studying in an hostel for studying where he found a roommate namely Rohail and then,he is considered the most closest friend of Shafay . Being two most closest friends there was a big different between Shafay and Rohail. Shafay was a descent and a simple gay while Roahil was characterised a bad gay due to his inappropriate touch with others girls. because of such attachments he became the victim of HIV AIDs without any awareness. Beside this, Rohail always uses the materials of Shafay, once he used the shaving razor of Shafay and then Shafay used the same. Tearfully, here the disease transferred to Shafay without knowing anything. In addition, when shafay finished his education he Starts to work with his father in his office, where once Biya came for the job, fortunately she was appointed there and has been working there. Shafay likes the innocence of Biya and he fell in love with her, with the passage of time both fell in love each other. Here, they wanted to marry each other.

When Shafay’s mother Momina comes to know that her son has contracted HIV AIDs, she is heartbroken. She fears for his life, knowing he won’t be able to live longer than two years maximum. She thinks about all those girls he might’ve bedded but when the knowledge of Bia comes to her, she blame her for her son’s illness.

So, Shafay married Biya and was living a happy life full of love, emotions and respect, after some months Biya got pregnant. Once accidentally Biya came to know that Shafay has HIV AIDS and it is transferred to Biya as well. This was shocking for Biya whose life was being destroyed. She with broken heart blamed the character of Shafay, while Shafay came to know about his disease and his wife he blamed the character of Biya . Here, Shafay took the Biya out of his home. Biya goes to doctor and stayed there. It is worrying that the disease transferred to Biya’s Baya who had not come in this world yet.

Days passed, Shafay came to know the disease was transferred through Rohail, here he brought Biya at home once again and got anger to her mother since she was aware about the disease still she hidden it .

After two years with the efforts of some doctors they life of Biya’s baby was protected but it is something to feel sorrow that Biya, Shafay and the gay Roahil lost their lives because of HIV AIDs. The mistake of one person became the reason of three people’s death.

I would like to give a special shoutout to the makers of ‘Baydardi’ for bringing onscreen such a moving story. You can’t stop your tears. The story is informative as it essays the real cause of AIDS transmission. The story also cautions us not to physically indulge in any act of emotion as we never know where danger lies.