American mainstream political parties Democrats and Republicans as well as politicians across the aisle do disagree on domestic policies, but they join hands when it comes to interfere in the internal affairs of a sovereign state which dares defy America or follow a different economic model or geo-political direction. Having done unimaginable destruction in Libya, Syria, Iraq and Afghanistan, the United States of America has spelled out its ugly scheme of regime -change in Venezuela.

Economic sanctions, the legitimacy card and supporting the opposition – US age- old- “divide -and rule ” strategy applied in various countries- are now in action in Caracas to topple socialist Nicolas Maduro led -government

Poverty, hunger and crime are now the words to be used as justification for an unjustified action in Venezuela by American President Trump to remove legitimate government in order to install a puppet government under Juan Guido -the head of opposition controlled National Assembly -self proclaimed “interim president ” so that Trump White House can rob the country’s natural resources.

The eagerness with which Guaido -the “self-declared president “was acknowledged as the “legitimate president ” by the White House, France Germany ,Canada and several other US allies does not need much thinking to suggest that the events were orchestrated and anticipated.

Very recently ,while addressing the crowd at Florida International University in Miami – South Florida is home to more than 100,000 Venezuelans and Venezuelan Americans – Donald Trump said ” a new day is coming in Latin America” warning Nicolas Maduro that he sought a peaceful transition of power “but all options are open” Trump also condemned communism and socialism ,which he said has produced “a nightmare of poverty, hunger and death”.

“Years of socialist rule have brought this once thriving nation to the brink of ruin” he said ,saying the Venezuelan government had suppressed the press, ruined the economy and destroyed the rule of law.” Having seen Venezuelan armed forces showing no sign of deserting Maduro, Trump unfolded his carrot and stick policy by addressing directly to Venezuela’s armed forces for backing Juan Guaido saying :We want to restore Venezuelan democracy and we believe the Venezuelan military and its leadership have a vital role to play in this process.” An offer of amnesty from Guaido could be accepted by Maduro’s supprters ,Trump said, as “President Guaido does not seek retribution against you and neither do we”. But he added : “You can choose to continue to support Maduro .If you choose this path you will find no safe harbour, no easy exit and no way out .You will lose everything ,he warned”.

Trump and his cronies bent upon destabilizing Venezuela, underestimated Venezuelan Armed forces’ professionalism, thought it would desert Maduro at the dictate of the Imperialist.

But , Venezuelan miltary have rejected Trump threats while reiterating their resolve to support Maduro thus pouring cold water on Trump’s plan of change of government through military insurrection.Thus, the reward for mutineers and punishment for those stand by Maduro government announced by the US has failed to materialise in desired direction. Earlier, Washington slapped economic sanctions last year , and in January White House imposed sanctions on the Venezuelan state oil company PDVSA freezing $7 billion of the company’s assets (as a result ) Venezuela saw hyperinflation last year because of it being dependent on oil revenues . Inflation is running as high as 800%. Four households in five are in poverty; twice the level of when Maduro ascended the throne. Besides, the price of the oil dropped in recent years ,and because 98% of Venezuela’s export earning come from oil ,the state of the country as well as economy kept declining rapidly.

Venezuelan Foreign Minister Jorge Arreaza blasted US actions and blamed his country’s economic problems on the US financial blocade and economic warfare. Keeping Imperialist American economic warfare in view ,Maduro has ordered European headquarters of Venezuelan state oil firm PDVSA to be moved to Mascow because of high risk of potential confiscation of oil revenues amid US sanctions against country’s energy sector.

“Venezuela is worried about further sanctions and asset seizures of the PDVSA ” Mehmet Ogutcu, the chair of the Bosphorus energy club”hence the decision to recolate its European headquarters to Russia so that the assets could not be risked” According to energy expert Mehmet Ogutcu, the Venezuelan government is determined to find new buyers for heavy crude ,which had been previously sold to US refineries.

The US purchased around 500,000 barrels per day from Venezuela before Washington introduced economic penalties against PDVSA, freezing $7billion of the company’s assets. Economic embargo by the Trump administration, and widespread corruption in state enterprises accompanied by mismanagement by Maduro government, the country despite having largest proven oil resources in the world, is trapped in dire fiancial situation/ economic stagnation , political crises and social divisions, with over three million -10th of its population – have fled to neighbouring countries in search of subsistence and safety. Almost 90% those who remain live in abject poverty. Shortage of food and medicines is phenomenal in the country.

Imagine imperialist America’s moral bankruptcy and hypocrisy, it first by slapping sanctions and refusing Maduro civilan set up access to its Venezuelan assets in US banks , caused humanitarian crises, now it has offered and stockpiled humanitarian aid in warehouses at Colombia and Brazil border that is to be distributed through the opposition. Venezuelan government has not allowed this so called US aid to be brought in because Maduro is connvinnced that it is nothing but a political conspiracy aimed at dramatising hunger and poverty in order to garner global support for Guan Guaido .

.Besides, supporting Guaido in the international arena, the US also promised $20 million in humanitarian aid to Guaido and access to Venezuelan assets held in US banks Apparently, to aggravate economic situation in Socialist country , not only the US administration has blocked Venezuelan assets in US banks but also old imperialist Britain has refused Maduro government access to its gold kept in British banks.

It is this network of disadvantages that has dragged Venezuel’s economy down.

Maduro also lacks his mentor Hugo Chavez’s charisma, but this does not mean there were no divisions in the society when Chavez was at the helm of country’s affairs; the society was divided but Chavez ‘s charisma united his countrymen. Maduro’s growing authoritarianism accopmanied by economic inequalities and poverty have brought forth both political polarisation and political crises which are far from being over. It is this political polarisation and social pains faced by public that America is exploiting to its imperialist adventure with the help of short-sighted Juan Guaido. Power hunger has blinded him to the extent of calling imperialist America and and its allies to interfere in the internal affairs of a sovereign state. .Maduro has repeatedly accused America of trying to foment a coup against him aimed at taking away his country’s resources and oil.

“What is ” casus belli ” does Trump have against Venezuela? Have we got weapons of mass destruction? Are we a threat to the US? You know what the real casus belli is here ? Venezuelan oil. Venezuelan riches- gold, gas, diamonds, iron and water.”

Maduro added, “Imperialism helps no- one in the world” .Tell me where in the world have they sent humanitarian aid? All they send is bombs. Bombs that have destroyed Afghanistan, Iraq, Libya and Syria.”

Vladimir Putin said the poltical crises in the country was caused by a destructive external interference that grossly violates the most basic norms of the international law.

This is why, Russia ,Mexico Turkey, China and a number of other countries have urged dialogue and political solution to the current political crises and no international intervention in Venezuela’s internal affair.

“In accordance with the Charter of the United Nations ,that no state has the right to intrvent directly or indirectly for any reason whatsoever in the internal or external affairs of any other state” .

British writer Finian Cunningham in his recent write-up titled “Trump’s Venezuela gamble is turning out tone be a beaten docket” has justifiably called for the trial of Trump and his team for their undemocratic exercise and starvation in Venezuela for petty political considerations saying that ” Washington has slapped sanctions on Venezuela ‘s oil dependent economy causing much deprivation in the country of nearly 31 million people.

The Trump White House has arbitrarily anointed a minor opposition figure Juan Gaido as the “recognized president ” while violating the electoral mandate of Nicholas Maduro and the ruling of Venezuela’s Supreme court. Furthermore, Washington and its servile media have openly called for an isurrection by the military. If anyone is liable for prosecution for crimes against humanity and crimes against peace it is American polticians like Rubio as well as President Trump along with VP Mike Pence ,Secretary of state Mike Pompeo and National Security Advisor John Bolton. They all have flagrantly violated the United Nations charter in their attempts at eliciting regime change in Venezuela.”

The writer hails from Larkana 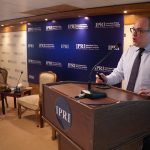 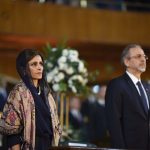