‘Massbat’ — a play with a message 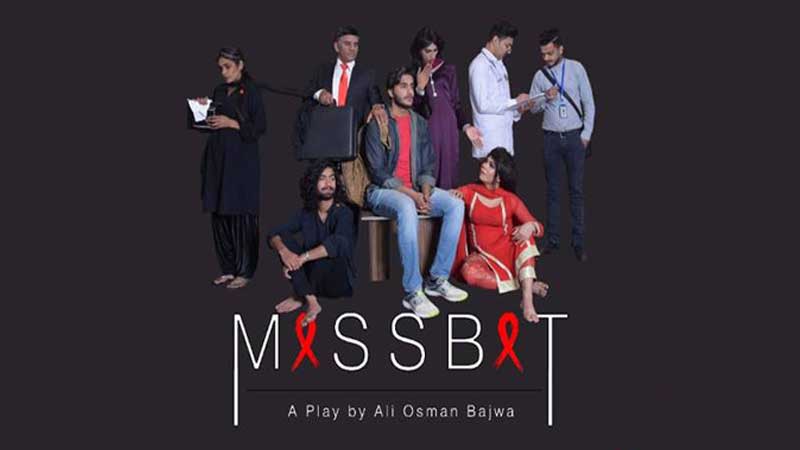 Seeing people die of infectious diseases has always disturbed me. People catch infections by even drinking contaminated or unfiltered water often ending up with hepatitis. Not everyone can afford expensive injections and not all the government hospitals cater to treatment of this deadly disease. AIDS is another disease that can be quite a menace for those infected by it.

When I got to know that this disease has spread like fire in Jalalpur Jattan, near Gujarat and in Kot Momin etc, I was devastated on this alarming state of affairs. According to the latest information, there are 150,000 HIV positive cases in Pakistan out of which only 25,000 are registered and only 15,000 are on medication. That is quite an alarming situation. Earlier, I had thought that this disease was more common in the West and in Africa.

In Jalalpur Jattan alone, a high proportion of cases in females and children less than 10 years of age have been observed. According to a report available on the Internet, socio-cultural norms and stigmatisation has limited in-depth investigation of sexual and behavioural practices and history of drug abuse not only in these areas but also elsewhere. A shift of HIV infection from high-risk groups to the general population has been seen and this situation requires vigilant surveillance besides targeted health education, clinical management, laboratory facilities for diagnosis and monitoring and voluntary counselling and testing services to limit the spread of this disease.

Bewaring people of the devastation caused by infectious diseases and how to control them if infected by it and making use of the government facilities available for treatment is the dire need of the day. Seminars, lectures and pamphlets are one way but there is a softer way like staging theatrical performances to spread the message. This could help in changing their lifestyle. Dhanak Theatre under the banner of Dostana Male Health Society came to the rescue. Apart from convening weekly literary workshops, this group came out with the idea of staging a theatre play to be held in three different locations of Lahore.

Dhanak Theatre under the banner of Dostana Male Health Society came to the rescue. Apart from convening weekly literary workshops, this group came out with the idea of staging a theatre play to be held in three different locations of Lahore

The first appearance of the play “Massbat” was seen in Alhamra Art Centre, Gaddafi Stadium, Lahore on February 14, 2019. The play revolves around HIV as well as our social behaviour and relationships of human beings. The play was staged in the Human Rights Commission of Pakistan (HRCP) Hall in the offices of HRCP, New Garden Town on Monday. Prominent among those who attended this play were Mr & Mrs Javed Rizvi, Mrs CM Munir, Amir Faraz, Dr Yasin Babar and a large faction of the society. Written and directed by Ali Usman Bajwa, the message behind the play was to avail medical help and psychological treatment from the available World Health Organisation programmes in major hospitals.

The play revolves around the life of a young man named Ali who has contracted HIV and is escorted by a transgender to a doctor who informs that HIV is not a death sentence. The doctor explains that one has to take a pill on daily basis like in case of taking insulin for diabetes and lead a normal life. One of the acts in the play is the literary session staged by Dhanak where poetry of activist Iftikhar Nasim’s “Barish-e-Sang” and Amir Faraz’s Bright Sunny Day were presented. The beauty of this play was that all the actors were non-professionals barring Naina Baloch as Sabira and Sarfaraz Ansari as Rashid who enact an old couple. The supporting cast was Munib as Ali, Bilal as a field worker, Maham as Saloni, Amir as Kajol, Usman Ali as doctor and Abuzar as Madhu. The play entices both laughter and tears as the script and acting was very powerful despite that Dhanak Theatre is a youth-led group. Abuzar assisted Ali Usman Bajwa as assistant director. The message was conveyed in a soft manner to a large number of civil society members, youth, students, artists, writers, doctors and transgender community who attended the event. Imran Pirzada, Imran Butt, Amir Faraz, Naghma Gogi, Bushra Rani, Ramzan, Mafia Ahmed, Tanzilur Rahman and Babar Yasin were among the key guests during the first performance.

It is high time that Lahore Arts Council, Punjab Arts Council and alike should join hands with these non-commercial groups to spread awareness by staging theatre plays such as “Massbat” on this issue. Presently, only a handful of youngsters are carrying out this effort with their meagre means. The other provinces should follow suit.