State oppression on the rise 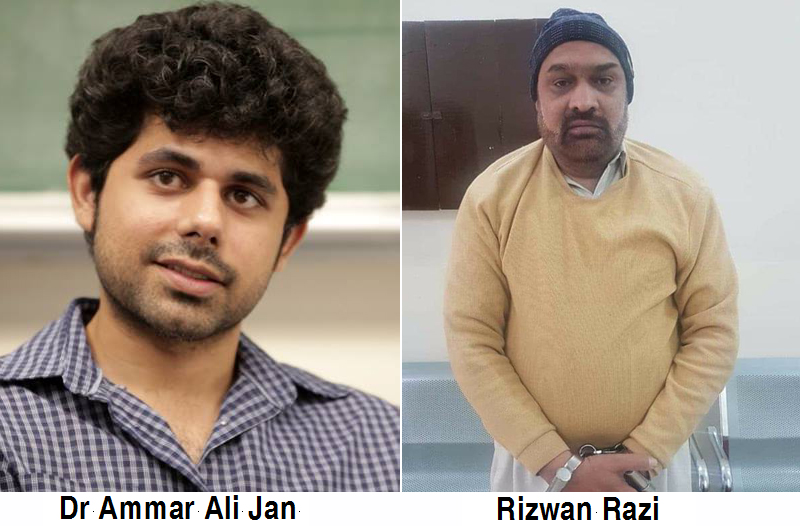 Authorities in Pakistan have started to curb dissent and freedom of expression of peaceful citizens by arresting them in extremely controversial manner. At 4am on Friday morning, several heavily armed law enforcers, many in plain clothes, reached the house of young academic Dr. Ammar Ali Jan and jumped over the wall. The CCTV footage of their entry appears to show a commando style break-in into the hideout of the most dangerous terrorist or criminal mastermind. Jan, on the other hand is a human rights activist and a young professor who stands against all kinds of violence and oppression, including, when it allegedly comes from sensitive state institutions.

While speaking to Daily Times just after his bail, Jan clarified that he is not part of any particular organisation against which arrests are being made but merely supporting the rights of citizens to peacefully dissent. He said that a battle of ideas is taking place in the country, but such battles need to be fought via discourse, not brute physical force. Jan hopes that the state can stop perceiving the peaceful demands of the youth as a rebellion. He expressed that the toxic paranoia based on fictitious narrative is a new reality and the state appears to demand complete obedience with no room for debate.

Jan said that he hopes for a Pakistan that is not too sensitive where instead of allowing banned outfits and extremist forces to hold the country hostage, young people’s reservations against terrorism, extremism and violence are addressed. He said that the battle of state security agencies needs to be against extremists, not youngsters.

A well-known journalist critical of the incumbent Pakistan Tehreek-e-Insaf government, Rizwan Razi has also been picked up by the Federal Investigations Agency. His son took to the social media to announce:

“I, the son of Rizwan Razi, (am) writing this. Today morning some people picked up my father and pushed him into a vehicle and drove away.”

The pattern of the arrest was similar to that of Ammar Ali Jan; armed men in plain clothes rounding up a non-violent citizen in a way that would silence his dissent. Razi was picked up on cyber crime charges for criticising the judiciary, government and state institutions. Razi’s family says that he was facing threats and intimidation since quite some time. Under detention, according to the FIA, Razi is “very embarrassed for the alleged posts and (has) apologised”. Razi has also allegedly promised never to repeat his mistakes.

These incidents of arrests come after scores of protestors have been rounded up this week from different cities in Pakistan. A PTM activist died in a clash with police in the town of Loralai in southwestern Balochistan province during a sit-in. Several activists remain behind bars while few have been able to get bail. The current situation has resulted in more protests and subsequent arrests. The cycle appears to continue.

Regime of fear -in power

Prominent journalist Talat Hussain, who has lost his presence in the mainstream media, took to social media to express his views:

“It’s not a solution to arrest the people instead of listening their grievances and reservations. Ammar is a law abiding citizen and an academician but the way he was arrested last night is really immoral and unethical,” he said. Our sympathies are with his father Dr Javaid Jan who is a revolutionary poet associated with the PPP, he added. He further remarked that “everyone knows who is really behind these arrests”.

In Karachi, lawyer and activist Jibran Nasir has also spoken against the manner in which state is suppressing the rights of its citizens and creating an environment of dread and dismay. He said it was not a particular idea or political party that was under threat but rather every expression that is not in line is being crushed.

Human rights activist Farzana Bari based in Islamabad suggested that the state is perhaps afraid of awareness and power of the voice of the youth. She thinks that these voices will increase as unrest grows due to such tactics of the state.

Haider Butt of Progressive Students Alliance was a witness to Jan’s arrest.

“Ammar was produced in the court if as he is a terrorist because over 3 dozen police officials were escorting him in the court,” He added that the real terrorists like Rao Anwaar are roaming freely.