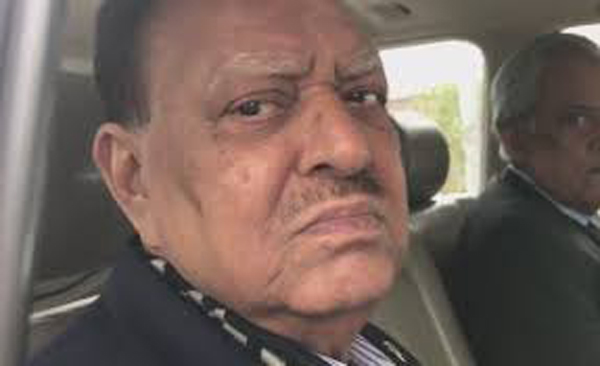 Former president Mamnoon Hussain Thursday prayed to Allah Almighty to have mercy on Pakistan, claiming that Prime Minister Imran Khan was not running the country well.

“Inflation is high as compared to the previous government. The incumbent government has unemployed scores of people,” the former president said while talking to reporters after meeting former prime minister Nawaz Sharif at Kot Lakhpat jail. “Imran should concentrate on economy … he needs to do something for the poor,” he added.

The former president said he was there to express faith in Nawaz Sharif, adding that the former prime minister was not keeping in good health.

PML-N leaders inquired about Nawaz Sharif’s health, to which the former prime minister replied that he had been told by the doctors of having an enlarged heart. “I told doctors that I have a big heart and am a big-hearted person,” he was quoted as saying.

Talking to media outside the jail, PML-N leader Talal Chaudhry declared the existing government incompetent who has even snatched bread from the poor. He said two properties of Imran Khan’s sister Aleema Khan were found in one country, adding that both brother and sister turned black money into white. “Truth always prevails and Nawaz Sharif will be declared innocent from courts on day,” he hoped.

“We do not need to topple the incumbent government … it will fall apart in a short period of time itself,” former Sindh governor Muhammad Zubair said. “Performance is judged through teamwork but here the team leader is not right,” he added.

Zubair said the government should take care of Nawaz Sharif as he remained prime minister of the country for three times. The prison officials at the gate of Kot Lakhpat jail were allowing admission to each visitor after security clearance and watching their names in the visitors list. All visitors walked to the barrack after security clearance but former information minister Mariam Aurangzeb travelled in a rickshaw.