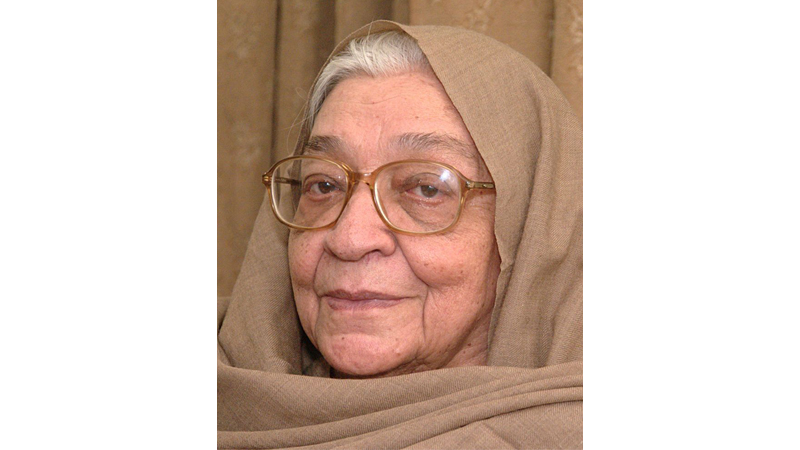 The legendary Indian writer Krishna Sobti (94) is no more. She inspired generations of Indian writers with her short stories and essays. I knew her personally and would always meet her during my visits to Delhi. The camaraderie between us was primarily because of the fact that she was born in Gujrat, Punjab which is my hometown.

When I met her for the first time in her flat in Delhi, she told me that she had lived in a mohalla in Gujrat called Sobtiyan, named after her father Dr Sobti. When I told her that I belong to Gujrat and that my late father knew her father, she was immensely delighted. Duringthe International Punjabi Conference, I invited her to Lahore with the promise that I would take her to Gujrat to her previous home in mohalla Sobtiyan. But unfortunately, because of her illness, she could not make the trip.

She received many awards from the Indian Government, the highest being the Jnanpith Award. She was also a fellow of the Sahtiya Academy of India. She got recognition when her short story book ‘Lama’, about a Tibetan Buddhist priest, was published. Her famous short story about the partition titled, ‘Sikka Badal Gaya’, was appreciated on both sides of the border.

The theme of her writings was directed towards women empowerment for which she was personally very active. Sobti and her husband settled in her flat in Mayur Vihar in East Delhi. Her husband, a Dogri writer, was also born on the same day of the same year (18th of February 1925) as Krishna. She received lots of laurels on her novel ‘Mitro Marjani’.

Sobti had a great love for Punjabi and always spoke in the language, with me at least. She initially started her higher education in Lahore and after partition she continued her education in Delhi and Shimla. She used idiomatic Urdu and Punjbi while writing in Hindi. Her writings styles were new as compared to the prevalent styles during that period. A selection of her major works have been published in ‘Sobti Eka Sohabata’.

Sobti had great love for Punjabi and always spoke in the language. She initially started her higher education in Lahore and after Partition, continued it in Delhi and Shimla

I frequently stayed with another legend Amrita Pritam, with whom she had a dispute on the issue of her famous novel ‘Zindaginama’. Pritam published a book titled ‘Hardatt Ka Zindaginama’. Sobti filed a suit for damages against Pritam for copy right violation of the title. The suit was litigated for 26 years. I tried best that the two legends, could come to some sort of a compromise over the issue, but my efforts did not succeed because both sides stand was irreconcilable. Later, after Amrita’s death the litigation concluded in her favour.

Here I would like to mention that it was my great wish to invite Amrita Pritam to Pakistan but even on my insistence she always smiled with tears in her eyes saying “Fakhar jithon aa jaayeh othaay fair ki jana?” (Fakhar! why return to a place which you have left?).

Pritam’s novels included ‘Zindaginama’, ‘Mitro Marjan’i, ‘Samay Sargam’, ‘Surajmukhi Andheray Ki’, ‘Badaloon ke Ghere’ and others. Her short story collections were ‘Nafisa’ and ‘Sikka Badal Gaya’. She was offered the Padma Bhushan by the Government of India in 2010 , hich she declined saying, “As a writer, I have to keep distance from the establishment.”

Sobti was a very kind soul, very affectionate and loving. I remember, in Delhi, she asked me to come to the India International Center where she was to inaugurate a paintings exhibition. I reached there and saw her in the company of young writers who were requesting her for an autograph; she generously introduced me to the writers admiring my contributions to Punjabi language and literature. Today, when I am writing this personal note on Sobti Ji, tears are trickling down my cheeks because of my close relationship with her and her affectionate and loving nature.