Young US Muslims clean up US parks as govt shutdown continues 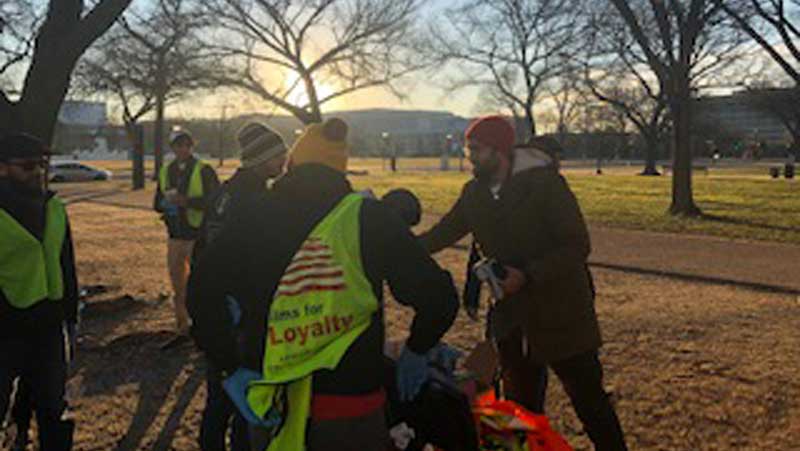 Young Muslim men from across the United Statesspent Saturday clearing rubbish from American national parks impacted by the government shutdown.

Following US President Donald Trump’s warning last week that the government shutdown might last for weeks or even years, the men, wearing gloves and protected clothing spread across the Mall in Washington DC – they picked up rubbish, emptied bins and removed rubbish bags – a job that the US federal government has stopped doing since the partial government shutdown began.

Faizan Tariq, aged 20, a University student who came to the US from Pakistan when he was 3-years -old said, “this is my country and my home and it is my responsibility to help it when it is in trouble.”

Tariqarrived early Saturday morning to join the other group. A member since he was 15 he said he participated because “duty to one’s nation is part of one’s faith.”

The young men are members of the Ahmadiyya Muslim Youth Association, a youth group of the branch of Islam. The men hope to lead by example and that their actions will convey a positive image to dispel negative Muslim stereotypes.

President of the youth groups’ Washington DC chapter, Bilal Bashir explained the motives for the initiative “We could not sit idly by as our national parks collected trash.”He said, “We will lead by example and dispose of this garbage appropriately and invite all Americans to join us in these parks and others across the nation.”

American national parks have been mostly closed to the public since the shutdown started December 22. In a press release, the National Park said it had “explored a number of options to address the maintenance and sanitation issues that have arisen at a number of highly visited parks,”

The statement continued “we are taking this extraordinary step to clean up trash and restrooms.”

Bashir said the group had received an overwhelmingly positive response in Washington. Their contemporaries had carried out the same clean-up operation across the country in parks affected by the shutdown including Florida, California and Ohio.

“This is just what we do – it is how we demonstrate our faith.” He said.”

The group were welcomed by passers-by, local joggers and families using the park. Some members of the public joined after hearing about them on social media.

Perrin McHugh, aged 18, who read about the group on twitter said, “I like the idea of helping people, if the government doesn’t take action then the people have to.”

Across America, cities, states, volunteers and private agencies are trying to fill the gap created by the government shut down; now entering its 4th week is the longest in US history. The political impasse between US President Trump and Congress has shuttered over twenty-five percent of the federal government. Thousands of federal employees and federal parks are and caught in the deadlock, with no political solution in sight, it’s uncertain how long the shutdown will continue.