London ATP: Zverev and Djokovic through to final 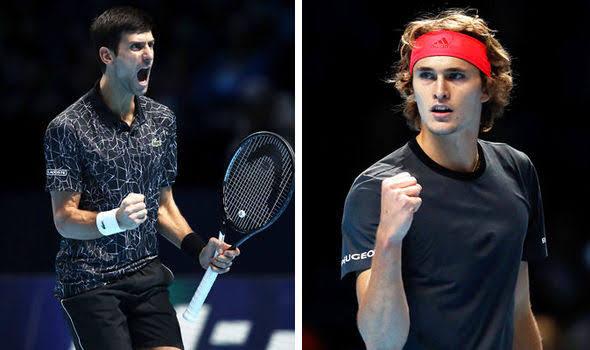 Alexander Zverev denied Roger Federer a chance to win his 100th career title by beating him 7-5 and 7-6 in a closely contested match at the Nitto ATP Finals in the semi-final on Saturday.

The match took a dramatic turn when Alexander Zverev stopped a rally on his serve, trailing 3-4 in the second-set tiebreaker, indicating a ball boy dropped a ball at the back of the court. Subsequently, the point was replayed on the umpire’s order and Zevrev levelled the score 4-4 with an ace before closing the match moments later.

“I want to apologise for the situation in the tiebreaker,” said Zverev, who was booed by some of the people in the crowd during the on-court interview.

Alexander Zverev is the youngest player to reach the final since 2009 and the first German since 1996. He will face Novak Djokovic – who outclassed Kevin Anderson in their semi-final match 6-2 and 6-2 – in the final.

Federer was looking for a record-extending seventh title here, but Zverev’s serve and power proved too much on this occasion.

“Zverev apologised to me at the net,” Federer said. “I was like, `Buddy, shut up. You don’t need to apologise to me here. Congratulations on a great match and a great tournament so far. All the best for the finals. And you move on.”

Though, Zverev reached one quarter-final in the grand slams this years, he is the only player outside the big four: Federer, Nadal, Djokovic and Murray, to have won three masters title. Nevertheless, a victory  here would definitely exceed what he has achieved so far.

“Novak right now is the best player in the world,” said Zverev, who lost to Djokovic in the round-robin stage.

Djokovic is playing impeccable tennis as he outclassed Kevin Anderson to give himself a chance to level Federer’s six titles record at the ATP Finals. He maintained his record of not dropping a set so far in the tournament.

He won 20 points of the 27 points played on Anderson’s second serve as he broke him twice in each set on his way to victory.