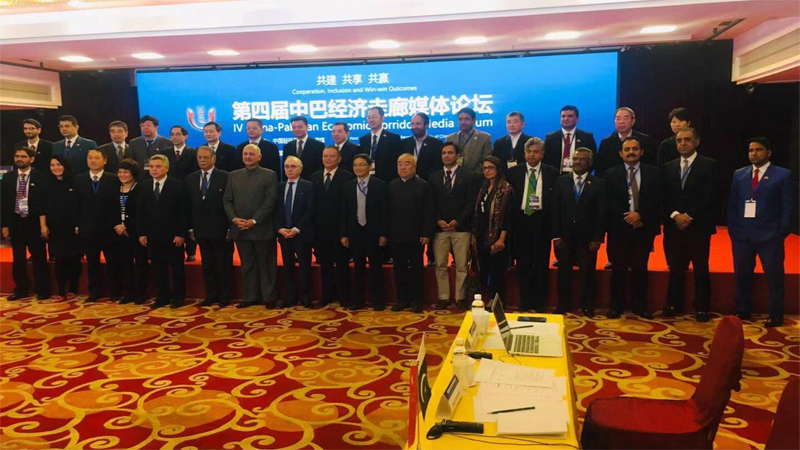 The CEN and the PCI, in collaboration with the Chinese Embassy in Islamabad, jointly organised the 4th CPEC Media Forum, which concluded Friday evening in Beijing. The purpose of the forum was to emphasise the need to disseminate factual information on the China-Pakistan Economic Corridor (CPEC), and also to devise a joint Pakistan-China strategy to counter negative perceptions that are generated by vested interests and detractors in the region.

In his opening remarks, the Ambassador of Pakistan to China Masood Khalid talked about the stance of the new government on the CPEC after the conclusion of Prime Minister Imran Khan’s visit to China.

The Ambassador also emphasised the role of media in disseminating accurate information on CPEC and said that there should be more media interaction between the two countries. “We need to guard Belt Road Initiative (BRI) and CPEC against the growing negativity of its detractors.”

Chairman of PCI and Senate Foreign Affairs Committee Senator Mushahid Hussain spoke about China’s rise and said that there was a shift in the global economic and political power from the West to the East, and China’s peaceful rise and development was an inspiration for developing countries. He said the BRI has now spawned a “Greater South Asia comprising South Asia, Central Asia, China, Iran and Afghanistan driven by economy and energy”.

“The One Belt, One Road is opening the door to a new world with CPEC as its success story since it is the flagship and pilot project of the BRI. Gwadar Port, the centre-piece of CPEC, is now a very active functional port and it is opening up the entire region, not just Pakistan.”

He also lauded CPEC’s role, as an “irreversible, mutually beneficial strategic project which has national consensus” in Pakistan’s economic growth rate, saying the highest 5.8% growth rate in a decade was attributable to CPEC.

“Pakistan’s chronic energy crisis has been controlled, with an additional nearly 10,000 megawatts of electricity since launch of CPEC, and in Thar, coal is being mined and turned into electricity,” Mushahid said. Citing the importance of media, the Senator said, “Today, we are seeking to establish a rapid response information mechanism through collaboration between Pakistan-China Institute and China Economic Net.”

Former Information Minister Senator Pervez Rashid urged the need to counter terrorism and extremism to create a conducive environment for promotion of CPEC. Dr Shezra Mansab Ali Kharal, ex-MNA, spoke about role of women in CPEC, including employment and empowerment of women.

After the speeches in the opening session, an award ceremony was held titled ‘CPEC Communication Golden Anchor Awards’, judged by a jury from both Pakistan and China. Winners were presented the awards by Ambassador Masood Khalid for best reporting on CPEC, both in Pakistan and China.

The event concluded with sessions titled ‘CPEC and Pakistan-China Media Cooperation’, ‘Strengthening Information Exchange between China and Pakistan Media’ and ‘Facts-Based Construction of Narratives on BRI and CPEC’, where media persons from both Pakistan and China gave their input on increasing media collaboration between the two countries.

The event was attended by senior journalists from print, electronic and digital media, government and Communist Party of China officials, parliamentarians, academia and students.