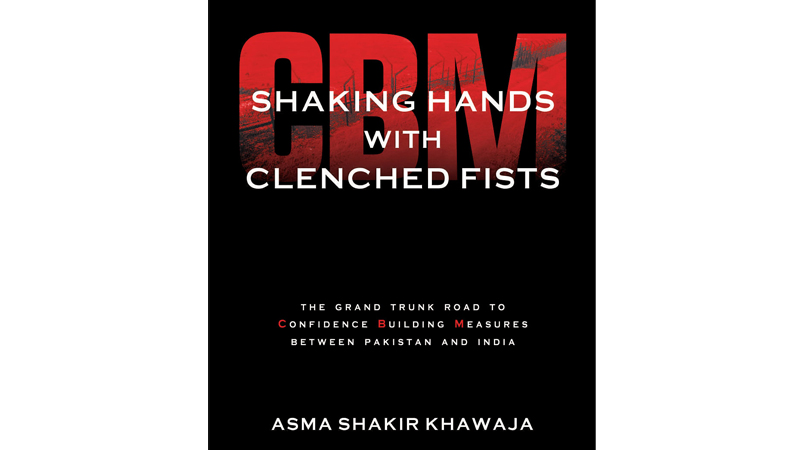 The book gets its thought provoking and intriguing title from the saying of former Indian Prime Minister Indira Gandhi ‘shaking hands with clenched fists’ under the desire to dwell upon mutual Conflict Building Measures between the two countries. It is a valuable contribution in the South Asian peace and conflict perspective and provides useful analysis and way forward on mutual peace building mechanism. The book effectively covers important elements of mutual interests to include the paramount issues like the Kashmir and water disputes as well as the military, nuclear and economic inter-connectivity paradigms. Besides, the book also discusses about contemporary elements of peace building; the social connections between the two societies and the role of media as both peace promoters and conflict bearers. The author also spells out the causes of wedge between Pakistan-India interstate relations described as spoilers. To make it a wholesome compendium in the end, the book lays down number of recommendations as probable mechanisms endorsed with a view to attaining a sustainable peace between the two countries besides removal of decades old conflict catalysts.

The book gives an effective insight on problem areas and adopted policies responsible towards accumulated mistrust and conflict over the decades. There is an ostensive asymmetry between the approach of two countries towards status of mutual conflicts and perceived solutions. The status-quo, as it suits India, will not help positively towards a desirable peace and resolution of disputes. The lacking of a common understanding platform creates dilemma of interpretation magnified by the differences in mindset and perceptions at both ends. Indian policy of aggressive evasion from the dialogue process, compelled by her internal political milieu and right wing nationalist mindset, has been responsible for limiting the space for holding pro-peace meaningful dialogue processes. The governments in India, for this reason, have always failed to capitalize and build upon after commencement of dialogues. The only softer and prevailing mechanism considered for a continuous engagement under stressed times is the back channel diplomacy. However, for all processes, main and governmental contacts must always remain as the primary sources of connectivity.

Increase in bilateral trade, socio-cultural exchanges and an effective perception building mechanism through media are considered key elements in this regard. However, it is easier said than done as the anti-Pakistan rhetoric is not something that can be easily wiped away from the Indian media thinking

The book opens up with founding and root causes of conflict between Pakistan and India. The author specifies that the interests carry more weight in conflict resolution than the stated position, however, we note that the interests of both countries are tangent to each other. It is evident from the fact that Pakistan is truly keen in resolving mutual conflicts and disputes but India is more contended on maintaining status-quo because of her control over the disputes like Kashmir and water. The misperceptions, insecurities and varying interpretations carry the disputes to a greater un-resolved status. The book appropriately highlights the need for establishing suitable pre-conditions to hold an effective process of dialogue through correct identification of bottlenecks and perceived hindrances on both sides. Kashmir is the biggest contention and core dispute which has witnessed prospects of peace but unfortunately a solution could never be manifested. Interestingly, the reader finds out the historical perspective and road to the contemporary nature of dispute through decades of independence. It gives a clear visibility over several occasions that could have led to a probable and mutually acceptable solution of the issue but nearly missed out. The Dixon Plan and Lahore Declaration are few of such occasions elaborated in the relevant portion. The book covers this aspect in greater deliberations.

The water hegemony is another major reason of retarding the peace process between Pakistan and India. Indian attempt to build hydro-power projects on the Western rivers affecting the water flow is the main source of concern in Pakistan. As Pakistan has already crossed the water scarcity level, any attempt to interrupt water flow from Indian side will be taken as an absolute aggression and violation of existing treaties. The author goes in details to elaborate various Indian mal-intentioned projects and their likely fallout on the reduction of Pakistan’s water share with negative effects on agriculture. The author also lays down valid CBMs towards resolution of water disputes. The revamp of Indus Water Treaty, to make it more effective, as well as separating politics from the water management are two most profound suggestions.

The military aspects also carry greater significance between two nuclear armed neighbours. The book declares Pakistan-India conflict as the source of Asia’s second nuclear flash point after Korean peninsula. It is considered that the contemporary international developments and opponents’ mutual approach towards conflict in both South Asia as well as the Korean peninsula; greater chances of nuclear tip off rests in South Asia. The book gives a detailed account of the nature of impending threat within two countries by analyzing developments in military strategies as well as the missile technologies. However, the most interesting part in the chapter are suggestions relating to the military and nuclear CBMs; to include establishment of joint crisis communication centers between Air Defence Commands of both countries and the advance notification of military exercises.

Economy, social context and the media interaction also carry greater share of responsibility towards peace and confidence building measures. The increase in bilateral trade, socio-cultural exchanges and an effective perception building mechanism through media are considered key elements in this regard. However, it is easier said than done as the anti-Pakistan rhetoric is not something that can be easily wiped away from the Indian media thinking. The problem further aggravates once the corridors of powers in New Delhi are occupied by supporters of Hindutva; the BJP. It becomes a sore concern that the Hindutva ideology is not only influencing media negatively but also restricting prospects of bilateral trade and socio-cultural connectivity. With regards to the CBMs in this context, the author underlines the importance of becoming more responsible over being more popular, as the prudent media policy.

There is no denying the fact that there are elements within both countries who view the peace prospects with lesser optimism. The influential ones tend to ensure disruption of dialogue processes once they see any probability of a positive outcome. However, these disruption or the spoilers have mainly been attributed to the Indian side in recent times. The anti-Pakistan and anti-Muslim rhetoric in India is so strong that even the lives of Muslims living in India are not safe. Incidents like Babri Mosque, Samjhota Express and Gujrat riots indicate the strength of these elements. In order to pursue an effective peace process, the author has suggested continuing the process of dialogue without disruption. The perception building mechanism needs to be targeted through involvement of all segments of the society, economic activities and the military as well as nuclear related CBMs. Role of media in this regard is of paramount importance that will help bridging interpretation as well as perception gaps. The resolution to the Kashmir dispute, without any second thought, stays as the most important issue to be addressed in line with the aspirations of the people of Jammu and Kashmir.

It is apparent that maintaining status-quo suits Indian designs of holding on to the issues in their present unresolved state. With a faster growing economy, anchoring the United States’ strategic approach in the Asia Pacific region, having increased role in international organizations and harnessing regional hegemonic designs, India is all set to become a significant global power and thus effectively avert Pakistan’s stance over bilateral disputes in times to come. Extremist and the right wing forces taking center stage in Indian political frame and carrying anti-Pakistan stance are likely to keep the process of dialogue and pursuance of CBMs disrupted. However, a zero-sum policy will neither be accepted nor work for Pakistan in any possible way. The CBMs in terms of positive media campaigns, military conventional and unconventional control mechanisms and an enhanced economic interdependence will pave way for spheres dominated by desirable mutual relationship as well as sustainable peace between Pakistan and India.

Dr Asma Shakir Khawaja is an Assistant Professor at the Peace and Conflict Studies, National Defence University, Islamabad, Pakistan. Besides teaching, her major responsibilities include performing as an acting Head of the Department, in-charge research and publications, course coordinator, in-charge student’s affairs, and member of board of studies. A doctor from Institute of South Asian Studies, Martin-Luther-University Halle-Wittenberg, Germany, she specializes in the conflict resolution, traditional and nontraditional security paradigms, international politics, conflict and cooperation in South Asia, media and conflict and the post nuclear conflict. She is the author of various research articles and other publications. In her publications she ostensibly carries a liberal and left of the center approach supporting promotion of peace paradigm in the world in general and South Asia in particular. Additionally, she occasionally talks as an Analyst and Subject Expert on national as well as international media.

The writer is a scholar of MPhil (Peace and Conflict Studies) at the National Defence University, Islamabad. He can be reached at naveed_217@yahoo.com