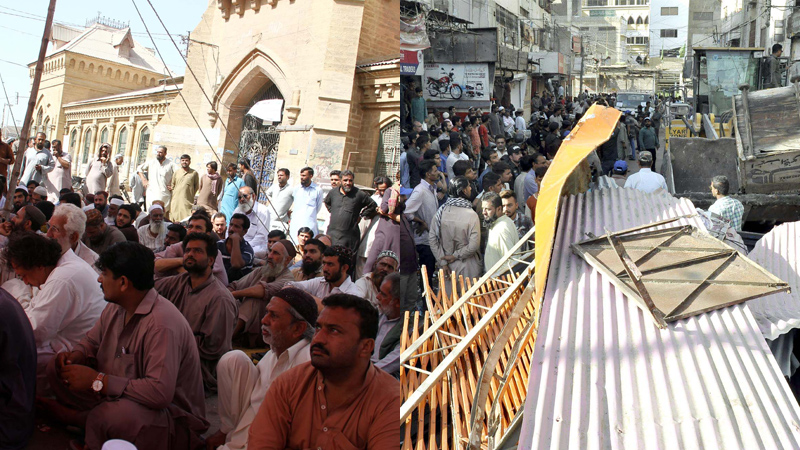 KARACHI: An anti-encroachment drive in Saddar entered its fourth day on Thursday.

The operation was conducted around Tibet Centre, Akbar Road and Zaibunnisa Street on the Supreme Court (SC) orders to remove encroachments from Saddar and adjoining areas. The apex court, on October 27, had ordered removal of encroachments in the city within the next 15 days.

However, on the fourth day of the protest, shop owners were observed protesting outside the Empress Market against the demolition of their shops. According to the shop owners, they had been paying rent to Karachi Metropolitan Corporation and other departments since the past 50 years and still their shops had been destroyed. They demanded that they be provided with an alternative venue to set up their shops or they will continue protesting.

Terming protests against the ongoing anti-encroachment operation in the Saddar area of the city’ illegal’, Karachi Mayor Waseem Akhtar said that the municipal authorities will not allow anyone to encroach the city.

Talking to journalists outside the Empress Market, he said that the government will not succumb to any pressure and stern action would be taken against encroachers. The mayor said they will comply with the top court’s orders in letter and spirit. He said that the government and all the institutions were on the same page against encroachments in the city.

The mayor said that they did not want to deprive anyone of their livelihood but will not allow anyone to encroach in the city. “We want to return the city and Empress Market to its original state,” he resolved. “We do not want to repeat the mistakes of the past. Contracts of all those areas that KMC had given under rent have been terminated,” he added. “All institutions should comply with SC’s orders and we will not let anything unlawful happen with anyone,” said Akhtar. “Those unemployed as result of the operation will be given an alternative space in another market,” he added.