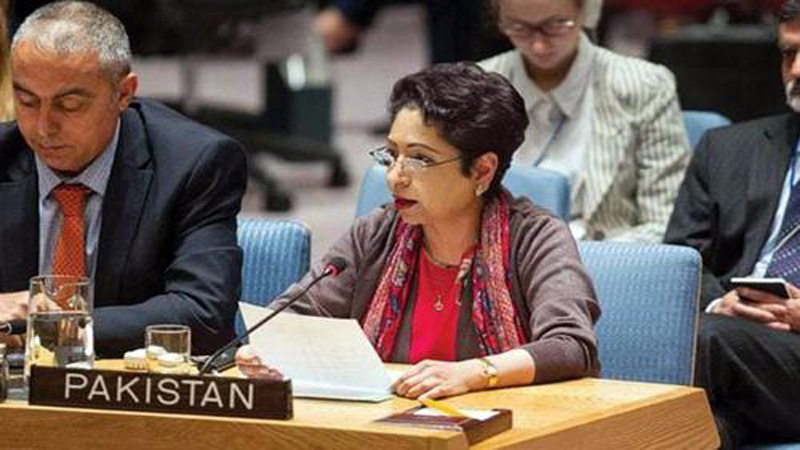 NEW YORK: Pakistan urged the United Nations (UN) Security Council on Friday to focus on prolonged conflicts, especially Jammu and Kashmir and Palestine, to protect women who had been suffering disproportionately from a long time due to the violence perpetuated by foreign occupation.

Speaking in the Security Council Debate on Women Peace and Security, Pakistan’s Ambassador to the UN Maleeha Lodhi remarked that women were soft targets in conflict situations who are often exploited by aggressors as a tactic of war.

Lodhi further said, “The Women, Peace and Security Agenda of Security Council provided a powerful tool to ensure feminisation of peace in a post-conflict environment but stressed that this needed to be elevated from the normative to a practical level.”

The Ambassador Lodhi stressed that the international community must ensure that equal attention is given to all pillars of this agenda and the framework is implemented at all levels.

“National human rights institutions can provide a critical link in the chain of accountability for women’s rights violations,” she remarked.

Lodhi underscored that women remain excluded from peace processes and negotiations because of structural inequalities and discriminatory power structures, which inhibit efforts for inclusive peace.

Women have nonetheless emerged as leaders and consensus builders amid conflict and violence, the ambassador asserted.

Also read No country can fight the menace of terrorism alone: Maleeha Lodhi

“By ensuring more meaningful participation for women we can bring them to table as true stakeholders who are able to define and protect their interests,” Lodhi added.

“Despite clear evidence that active female participation in peace processes significantly enhanced the prospects for peace, women continue to remain on the sidelines. This needs to change,” she further stated.

Talking about the commitment of Pakistan’s new government to women’s empowerment, Ambassador Lodhi said that this was among its top priorities.

“My own country’s experience showed that giving women key roles, brings fresh perspectives and builds solid foundations for a vibrant society,” she concluded.