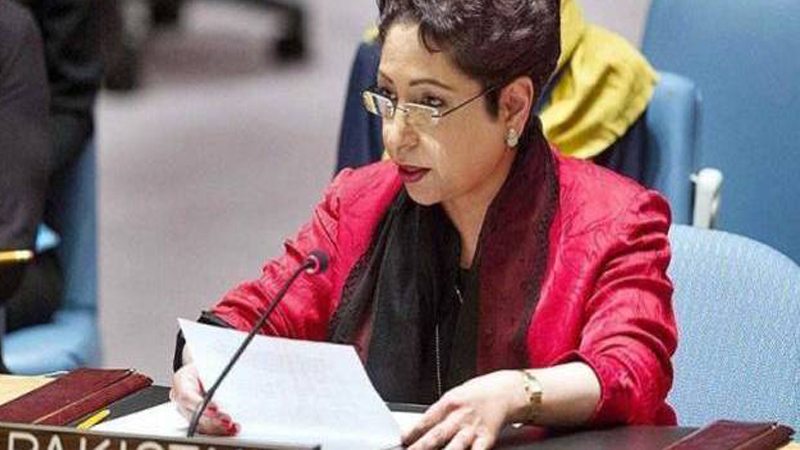 In a council debate on ‘Mediation and the Settlement of Disputes’ on Wednesday, Pakistan’s permanent representative to the UN Ambassador Maleeha Lodhi pushed for the implementation of United Nations Security Council resolution, which provide the exercise of right of self-determination to the Kashmiri people, for a peaceful settlement of the dispute.

“The international community cannot succeed in its efforts to strengthen conflict prevention and promote pacific dispute settlement if the Security Council’s own resolutions are held in abeyance, by some,” said Ambassador Maleeha Lodhi.

While the United Nations has had some successes in mediating political settlements, the long standing Jammu and Kashmir dispute remains on the Council’s agenda, with the 15-member body having provided the resolution that “the final disposition of the State of Jammu and Kashmir will be made in accordance with the will of the people expressed through a democratic, free and impartial plebiscite under the auspices of the United Nations.”

“Sadly, these resolutions remain unimplemented to date,” Ambassador Lodhi told delegates. ”Both the Council’s credibility as well as the objective of durable peace in our region is at stake,” she said, adding: “We must not fail these tests.”

She pointed that the Security Council also instituted several mechanisms including the UN Commission on India and Pakistan (UNCIP), the deployment of the UN Military Observer Group in India and Pakistan (UNMOGIP) and the appointment of distinguished Representatives of the United Nations, who consulted the parties and submitted reports on how to resolve the dispute in accordance with provisions of the Security Council resolutions, but it’s disappointing to see that no development has been made on the matter.

Expressing concern about the Security Council’s increasing tendency to resort to measures under Chapter VII of the UN Charter (enforcement action), she underscored the importance of Chapter VI (pacific settlement of disputes) and VII, which must be clearly held.

Ambassador Lodhi urged the Security Council to make more frequent use of the Secretary General’s good offices and other possibilities for mediation and conciliation. “We are happy to note that the Secretary General is working to expand the pool of high level envoys and senior mediators with special emphasis on women, she said, while also emphasising gender-parity in the composition of the Board.

“Despite clear evidence to suggest that active participation of women during peace processes significantly enhances the prospects for success, women continue to remain on the sidelines of the peace continuum,” she said, adding: “This anachronism must end.”

“While the Council could refer disputes to the International Court of Justice for an advisory opinion if not a legal decision or adjudication, it should also utilise its mandatory enforcement authority under Chapter VII of the Charter to refer a dispute to the ICJ, whose determination would thereafter be binding on the parties, irrespective of whether or not they had accepted the jurisdiction of the Court.”