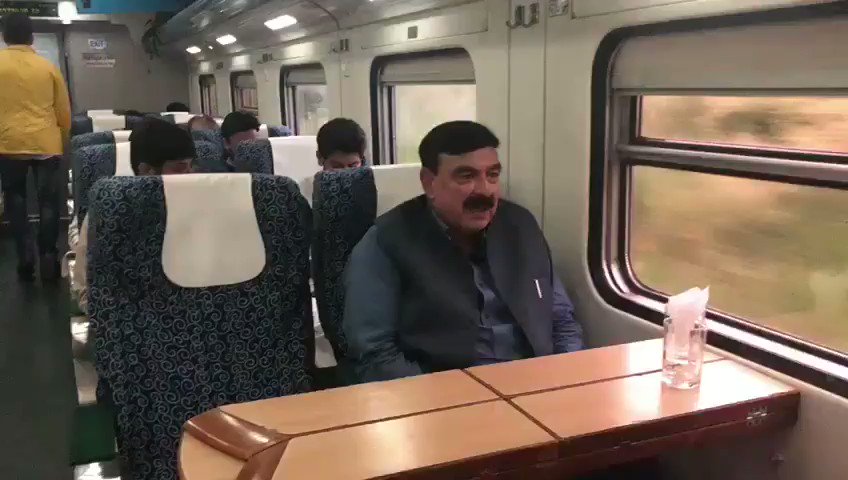 New Railways Minister Sheikh Rashid Ahmad’s publicity stunt backfired after posting a video on social media platform ‘twitter’ while he was travelling from Rawalpindi to Lahore on a train on Friday.

Sheikh Rasheed must have posted the video to show the adherence to austerity policy introduced by prime minister Imran Khan, but it quickly turned into a praise feast for Khawaja Saad Rafique.

People on social media were amazed to see the interior of a train cabin in the video. And people proceeded to congratulate former Railways Minister Khawaja Saad Rafique for the work he has done during his five years tenure.

The way the Saad Rafique has changed the conditions of Pakistan railway during his 5 year tenure. Social media users are calling this as the real change. Even some of the politicians are highly impressed and shock to see the current condition of trains.

Agree @KhSaad_Rafique has performed exceptionally well compared to his predecessors. One mustn’t take away credit where it is due. #Railway was in tatters when he took over.

The former Railway minister Khawaja Saad himself tweeted,  “Thankyou Sheikh Rashid for releasing the video for Lahore-Pindi rail parlor car , this shows where we have taken Pakistan railway to?”.

He further said that we have left all of the trains in good conditions,  if  the new government continues to work with the same speed and direction then in three years, the conditions of trains will not be dreadful.

A lot of the people saw inside of a train cabin for the first time and they expressed the surprise on social media.

This is brilliant. I had no idea how wonderful @KhSaad_Rafique had made Pakistan Railways. Kudos. https://t.co/B415SHLjjz

It seems most of the people are happy about seeing the condition of the Pakistan Railways back on track after a long time. Here are few more tweets:

Congratulations @KhSaad_Rafique u did a great job in your tenure even ministers can travel on railway system now https://t.co/tMMQA6rzd8