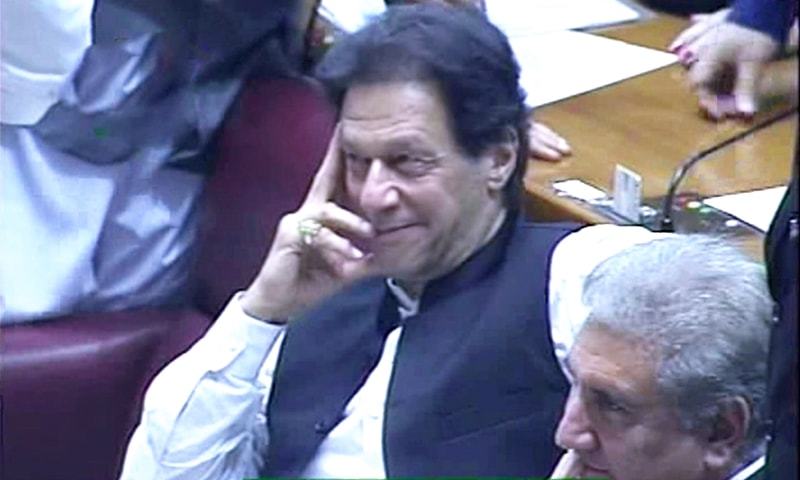 Imran got the support of 176 MNAs against his opponent Shehbaz Sharif who received 96 votes.

Following the election, the Pakistan Mulsim League-Nawaz (PML-N) members staged protest in the assembly chanting slogans ‘vote ko izzat do’ and ‘Wazir-e-Azam Nawaz Sharif’. Earlier, PML-N President Shehbaz, flanked with other party MNAs, entered the house wearing black band around his arm as a symbol of protest over the alleged rigging in July 25 polls.

The new prime minister will take oath in the President House on Saturday.

Imran, in his first address to the National Assembly after being elected as PM, said he will not spare any one who looted the country’s wealth.

“The country had been longing for the change PTI will bring. We will begin with holding all the looters accountable for their acts. No dacoit will get an NRO,”

The newly elected prime minister continued that he had neither been fostered by a military dictator, nor was his father a political leader. “Whatever I have achieved throughout my political career, and where I stand today, is due to my 22-year-long efforts,” he added.

Turning his guns towards PML-N supremo Shehbaz Sharif and JUI-F leader Fazlur Rehman, the PM said that if the opposition wants to protest against the PTI-led government, he will himself provide containers, resources and food.

After the speech of Imran Khan, Shehbaz spoke to the National Assembly. He reiterated the reservations of opposition parties and demanded a parliamentary commission to probe into allegations of rigging.

He said Imran became prime minister as a result of historic rigging.

Shehbaz went on to say that the opposition parties ‘will go to roads if their demands are not met’.

Bilawal Bhutto Zardari while delivering his maiden speech in the National Assembly said Parliament is ‘supreme’ and ‘mother of all institutions’.

He said that elections were rigged and that ‘we did not learn from the history’.

The PPP chairman also endorsed Shehbaz’s demand to form a parliamentary commission to probe into rigging.

Bilawal also said he is looking what the prime minister will do in his government’s first 100 days.

Moreover, the PPP chairman, in his speech, remembered those who lost their lives in Peshawar and Mastung during the election campaign.

The counting process to elect the country’s 22nd prime minister was commenced under the leadership of newly sworn-in Speaker of the National Assembly, Asad Qaiser.

Imran Khan was up against the Shehbaz Sharif in the contest for the country’s top slot.

Pakistan People’s Party (PPP) and Jamat-e-Islami (JI) did not take part in the process of election.

The PTI chairman had enough majority to be elected as the leader of the house easily as  (PPP) has withdrew its support for the opposition’s candidate for the slot, Shehbaz Sharif.

PTI spokesperson Fawad Chaudhry had claimed that Imran will be elected prime minister in the first round of voting by securing more than 180 votes. However, he got 176.