Insha,a pellet victim who passed her matriculation examination last year despite odds is an inspiring hope for the likewise victims. 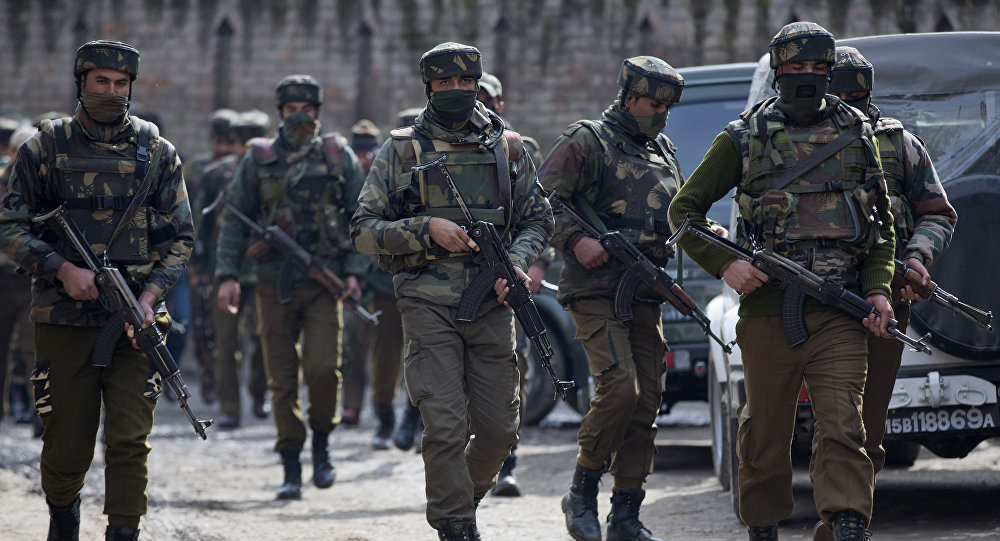 The world of today is beset with a plethora of conflicts, every right, left and centre. Kashmir imbroglio in the Asian sub-continent forms the majoritarian case of a looming imbroglio, overridden with a burden of mismanagement, broken promises and many more. The valley of Kashmir forms the contrary case of the strand of governance deficit which has given renewed impetus to the dissenting voices of the masses day in and day out.

Dissent is the hallmark of a democracy which acts as a medium for the expression of the masses against the system. There are certain rights and duties guaranteed for the citizens, including the right to freedom of expression and right to life. Caught in the quagmire of crisis that has deeply permeated the society, the people in Kahmir from time to time vent up their dissent. Protests are the tools for the masses through which they ventilate their pent up emotions. Kashmir is not a different case. It is also teemed with crisis and caught in a looming distress day in and day out. Kashmir is the most sensitive zone of the whole Asian sub-continent, where situations turn awry with the passage of time, It is the only state of the Indian Union, where there has been a reckless use of the pellet guns without any regard for the precious life of the common man.

Also Read: Hope for Kashmir and the Subcontinent

Kashmir’s pellet tragedy is a simmering question on the face of the Indian democracy, which has not only maimed, blinded and killed the masses, but also shaken the collective conscience of the people, who have fallen prey to a different approach of dichotomy of the government. The killing of Burhan Wani in 2016 brought about a volcanic eruption in valley which not only deteriorated the situation in Kashmir, but also increased the massive alienation of the masses. The waves of grief and anger agianst the day-to-day killings and maims that the people felt increased with each day. In order to control the crisis, the security agencies used the deadly pellets which caused heavy damage to the sufferers. More than 1200 people lost their vision in 2016. According to a report of State Human Rights Commission (SHRC), more than 75% people Post- Burhan Wani’s killing in 2016 suffered injuries due to pellet guns, ranging from minor to major. There was a heavy loss of life.

Although small in size, these black metallic balls have affected our young generation very badly. The use of pellet guns brought crisis in Kashmir. Whereas, for the security agencies, it is meant to disperse the crowds, but, for the common masses, it is a problematic affair.

Pellet guns are pump-action shotguns which fire a cluster of small, round, metal pellets with high velocity over a broad range.

Recently, after the killing of a militant from Pahalgam area, in the anti-establishment protests, a number of people were injured due to pellet injuries of the forces. A nurse working in the same area told me that she healed at least 100 plus pellet injured victims. The bloody Sunday of this year’s April and the subsequent clashes of the protestors with the security agencies left many injured, with multiple cases of pellet injuries to the eyes of the protestors.

These deadly pellets have not even spared the school going children and snatched the power of seeing of the victims. Insha,a pellet victim who passed her matriculation examination last year despite odds is an inspiring hope for the likewise victims.

Pellets cause a number of biological ramifications in the victim, like the loss of vision, the state of paralysis, in case, the damage is caused to the spinal cord,  defacements ,and death in case of damage to the vital organs of the body, like, heart, kidneys, lungs, brain, etc. Moreover, the pangs of guilt that a victim suffers in silence dishearten one and all. The use of pellet guns as a crowd-control method during protests, whether in case of cordon and search operations(CASO) or common protests has added a volley of questions to the interna of the common man.Being a part of 29 in the union, that two acing the crown, Kashmir has been treated otherwise all through the passing times. People have got million queries, but, there are no solid answers to their problems and subsequent tactful solutions.

The substitution of pellet guns with PAVA shells can in no way control the crisis.The way people of  other parts of the country are treated should form a close semblance in case of protests in Kashmir.Why the security forces are using pellets and bullets against the people whom the system claims with a sense of belonging. There can be other alternatives,like the use of water canons without an element of damage and ensuing crisis that engulfs the society and creeps the psyche of the common men. If this is the notion of the system to punish dissent,then dissent itself takes a u-turn of additions and alterations with the passage of time. The bleeding valley is giving a close call for one and all to unite and ensure a state of peace and order. The administrative and political will to stop the use of pellet guns has cold-hearted the people.

Whatever is happening to the people of Kashmir has not been experienced by the other people .The pall of gloom that one suffers hangs the disheartening states of one and all. After all, it is a question of humanity. People suffer out of the ways as circumstances decide or may be destined otherwise. But, to expect a peaceful valley without the intervention of a political will would be an underestimation of statements. There is a dual intolerance in Kashmir, one from the people and other from the system. The systematic targeting of the protestors from a point blank range irrespective of regard for the human life has shattered several families in Kashmir.

Kashmir is passing through the phases of testing times with each passing day. The ugly turn of the situations and recurring events and the amateur dealing of the same have created an unhealthy atmosphere everywhere, where people have lost faith in the governance systems. Exits from dwellings and adieus from home don’t guarantee the safe return of the people. The interlocutor of the centre in vale, Mr. Dineshwar Sharma once reiterated that, ‘the prority is to prevent Kashmir turning into Syria’. The imbroglio has crippled the educational scenario, downslowed the economy, increased the unemployment, but, above all,t he ultimate question is the redress of the problem at stake.

The victory of BJP at the centre with the thumping majority after the 2014 Lok Sabha elections with the slogan of ‘minimum government, maximum governance’ falls short of words and has partially failed in the state of J&K. The killings of the common masses are in no way remedies to the ailments. There should be the ultimate regard for the human lives. Why the blood of the people has been left so cheap? When will peace return to the valley of Kashmir? The government of India had constituted an expert committee in July 2016 to explore other possible alternatives to pellet guns as non-lethal weapons. Although, the committee submitted its report and the recommendations were taken into account by the government for implementation. But, what happened afterwards lies in the public domain for discussion. The use of pellet guns is tantamount to the violation of rights of the people.

In order to direct the valley towards the state of peace and development, the role of multiple players of India, Pakistan and Valley comes to fore. This way the government can make a significant contribution in the restoration of normalcy .