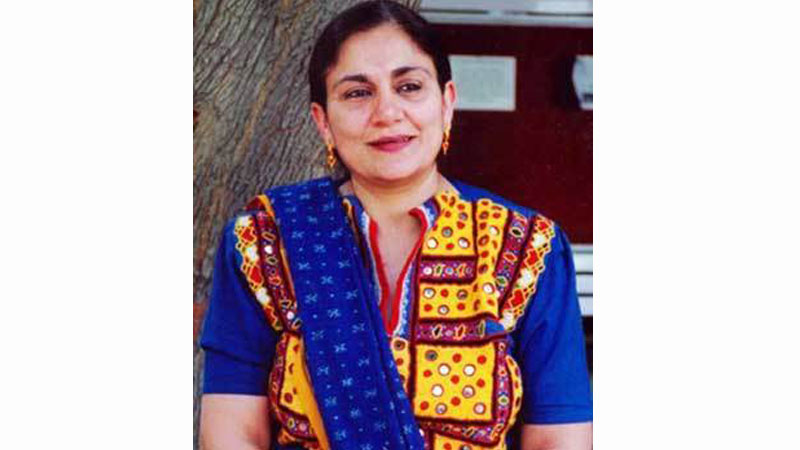 Madeeha Gauhar’s passing is not just the end of what will probably be considered the golden age of Pakistani theatre, it is a great loss for progressive, pro-peace voices in this country. Above all, it is a personal loss for her family, friends and admirers.

My first introduction to her was through TV. This was followed by a landmark protest demonstration at Chairing Cross on February 12, 1983 which was organised Women’s Action Forum (WAF) activists to protest against the notorious Qanun-e-Shahadat – one of the many laws introduced as part of Zia-ul-Haq’s Islamisation program. Madeeha Aapa, as she was called by us, the young members of Ajoka Theatre, was at the forefront of the demonstration. For this she was beaten and arrested. She had recently returned after completing her studies abroad, and I was a kid who had just accompanied her mother to the demonstration.

It was in 1986, when I was in High School that I heard of Ajoka Theatre, which she had co-founded with other theatre maestros like Salman Shahid and Shahid Nadeem (who she later married) a couple of years earlier. Despite regularly performing in the plays under our school’s dramatic club, I could not even think of being part of a theatre company like Ajoka, owing to the conservative family background that I come from. However, in 1997, once I personally met Madeeha Aapa immediately after my marriage, my family background couldn’t deter me.She was very close to my father-in-law, who remained a fatherly figure to her till her last breath. I have no qualms in saying she took care of him much more passionately than his own sons – being the passionate person that she was.

As a struggling couple, we were looking for a small place to start our life when Madeeha Aapa offered us a room in the Ajoka Theatre office for meagre rent. On our first day in her office and my home, she saw me arranging things while leading the rehearsal of Ajoka’s on-going play. It was one of Ajoka’s most famous plays, Kala Menda Bhais, which was being staged at the historic Goethe Institute of Lahore.

Just when she found out that one of her actresses was missing from rehearsal, she looked at me. I then found myself on the stage of Goethe Institute performing in that missing actor’s role. This was the beginning of an enriching part of my life as a theatre actress. This was gift to me from Madeeha Aapa, a gift that I relishedfor every single moment. For me it is an immense honour to have performed with legends like Zehra Sehgal and Uzra Butt and of performing in front of international theatre personalities like Usha Ganguly, Naseeruddin Shah and Jane Fonda.

She so consistently persuaded me to join the Ajoka Theatre as permanent member that I had to shun my hesitation and took to acting full on. The hesitation was not because I didn’t want to do it, but because my father had a very negative view of theatre actors, especially women. But Madeeha Aapa encouraged me to make my decision and go about convincing my father later. I remain grateful for her encouragement to this very day.

She had a knack for collecting the rarest and most beautiful pieces of art for her home. Every little corner of her home displayed a unique piece that she had collected from different corners of South Asia and Europe. Just like the progressive ideals that she was so committed to, cleanliness was a virtue that she followed strictly, sometimes causing those of us around her much exasperation! She would not let anyone enter her home with shoes on. Upon which, Sirmed would often tease her saying, “Madeeha Aapa your home sometimes feels like a mosque”. She would look at him dryly before bursting into laughter.

Our last meeting was at her home on the day of Asma Jahangir’s funeral when – she, Shahid Nadeem, Sirmed, Yameema Mitha and I – were all sitting and reminiscing about the moments that we had created together. Despite being devastated about losing Asma, she sounded as strong as ever for her commitment to these ideals. When her cat entered the room, Madeeha Aapa asked Shahid sahib to feed her. When he threw something towards the cat, MadeehaAapa protested in that good old Madeeha tone,” I told you to feed her, but did I tell you to ruin the carpet?”

She had started Ajoka Theatre during a time of extreme oppression. The way Jaloos, the inaugural play of Ajoka Theatre, was staged bears witness to that era’s repressed atmosphere. She had been unable to find any auditorium where the play could be staged. Finally, the performance had to be held at her illustrious mother’s home on the lawn. Even then,military choppers continued to hover over the lawn throughout the play’s duration.

Despite being trained and educated in theatre studies in the Western tradition, Madeeha Aapa made it a point to incorporate indigenous culture and theatre traditions of Nautanki and Bhand to her plays. She directed an untold number of plays in Punjabi, Siraiki, and Urdu and made it a point to showcase the Pakistani theatre tradition on the international stage. Because of her and Shahid sahib’s joint efforts, Ajoka has become Pakistan’s identity in the international theatre scene.

Madeeha Aapa did not just teach me how to act on stage but also how to throw your voice all the way to the last row of the hall, how to use every muscle of my face to express a plethora of human emotions and how to occupy the entire stage while performing solo and never letting a moment pass without variations in voice and movements of body. She taught me many important lessons. In many of her resistance plays, she used black and white colours for costumes to depict the harsh contrasts of the times and social classes. In one of the plays where I had to play the role of a woman who had murdered her husband after years of abuse, she told me what kind of clothes I must try. When I came on the day of full dress rehearsal, I was wearing a monotone black shirt with round neck, only to be castigated by her and being ousted from the rehearsal. She later told me to always be cognizant of the nature of the costume, which should never reveal more than necessary. “Remember Marvi, you are not the entertainment, the work you do is entertainment”, she had said.

Off the stage when we were not rehearsing, she was a bubbly child. Despite her toughresistance against oppressive regimes – be they military or civilian – she never lost her ability to laugh and make small talk. “I am in Islamabad, lets have a quick gossip session” used to be her usual phone call whenever she visited. It was very easy to make her laugh, smile and suddenly go soft even when she was in the angriest of moods. She liked good food and I used to cook well in those days.

Although I used to wear a Sari before we met, it was she whotaught me how to wear it in a comfortable way which allowed me to do my daily chores. Her penchant for shopping and her restless, exploratory nature used to put her in trouble with Shahid sahib whenever we were travelling. She would often be late for her flights because of her shopping trips.

Right now, it is difficult for me to believe that I will never be reminded by her to say happy birthday to my father in law, who she loved deeply. It is impossible Madeeha Apa, to internalise the fact that I will never get a phone call from you inviting me for another gossip session or to watch a play or to perform in one of Ajoka’s plays. Ajoka won’t be the same without you. I won’t be the same without you. Rest in peace Madeeha Aapa, I know the heavens are lucky to have you right now.