The far-right vote that no longer adjusts in the mainstream 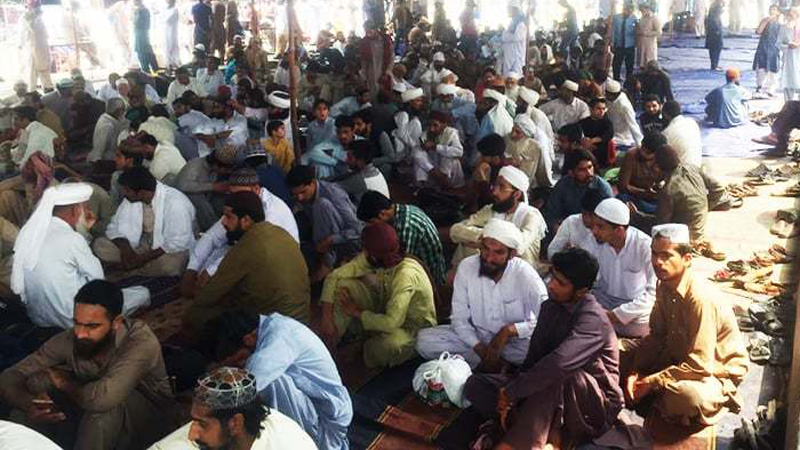 Tehrik-e-Labbaik Pakistan’s sit-in camp in front of the Data Darbar was only sparsely populated in the afternoon last Saturday. The campers sat in small groups of three or four, some catching up on sleep using backpacks as headrests. “This is not the true strength of the dharna,” said Muhammad Bilal, sitting all by himself holding a textbook of business law he brought along to prepare for a test next week.

“At this hour of the day, many people leave the camp to visit the darbar or to take some rest in nearby mosques. They return around Asr when speeches begin,” he said.

Bilal’s father cultivates a small plot of agricultural land in Rasoolpur Jatta, a village near one of Sheikhupura’s small towns Manawala. His elder brother had spent two days at the dharna before he arrived on Friday night with plans to stay till Sunday evening. With his three brothers running small-scale businesses of construction work and transport, he’s the only sibling to have made it to college to study commerce, which was not his first choice though. “I wanted to study science subjects, but my [intermediate] marks were not enough. I will do my master’s degree in science now, either statistics or computer science.”

TLP leader Pir Zaheerul Hasan Shah and his sons are campaigning in his area and Bilal, not yet a full-time member, is hopeful that residents will support them in the upcoming election. He identifies himself as a Sunni devoted to the cause of Nizam-e-Mustafa. Asked what does the cause entail exactly in an Islamic republic, he said mainstream parties were driven by an agenda to promote liberalism and ‘fahashism’, a neologism he explained in the following words: “Look at their jalsas, men and women dance together and listen to music.”

Noticing my gaze turn to his earphones plugged into the smartphone, he was quick to clarify that he was watching a video about the recent attack on a seminary in Afghan province Kunduz with naats playing in the background.

Though he hasn’t checked for himself but based on information gathered on social media, he was certain that the government was purging schools’ syllabus of all Islamic references. “What is the point in making us read Mr Chips? Let us instead read the seerat of the Holy Prophet (PBUH) or the sahaba.”

Sitting a few feet from Bilal, Sajid Rizvi introduced himself as the TLP candidate from PP-35 Pasrur, a tehsil of Sialkot. Having followed TLP leader Khadim Hussain Rizvi’s sermons on the Internet during his stay in Dubai where he and his brothers have a construction business, he said he returned to the country after learning about Mumtaz Qadri’s death sentence in 2015 and started working with the ‘tehrik’. As part of his election campaign, he said he has set up units in every union council of PP-35, with an 11-member teams to oversee affairs at the unit level. The teams comprise nazims for public welfare, finance, education, media as well as for traders and lawyers’ wings.

A man sitting beside Rizvi said he had a job in the Nestle Pakistan factory but he took days off to participate in the dharna on Pir Zaheerul Hasan’s call.

Next to the two men was a child wearing a custom-made T-shirt with TLY logo and its election symbol of crane. He had come as part of a delegation from his seminary in Bahawalnagar.

Groups from Muzaffargarh were less forthcoming, excusing themselves from a conversation because ‘they weren’t allowed to speak to the media’.

Towards the end of the camp, there was a makeshift food court with dozens of crates of bottled water and carbonated beverages. After examining my press card, Hassaan Butt, who introduced himself as the TLP operations incharge in Lahore, said the food court was run with donations. “Though there is langar available at the darbar but we provide food for the participants on our own.”

When the TLP concluded its 21-day sit-in at Faizabad following a controversial agreement with the federal government brokered by the Chief of the Army Staff, Ashraf Jalali-led Tehrik-e-Labbaik Ya Rasoolullah (RLY) continued its sit-in in Lahore for another week, demanding among other things resignation of Punjab Law Minister Rana Sanaullah.

Coinciding with the TLP’s ongoing sit-in, on Saturday, TLY held its annual dastar bandi ceremony at the recently renovated Greater Iqbal Park to recognise graduates of its country-wide network seminaries run under the Tehreek-e-Sirat-e-Mustaqeem (TSM) banner. “The jalsa is also significant given the prevailing political scenario. Jalali sb will announce our future course of action today,” said Muhammad Younas Qadri, introduced to me as one of the central organisers at the venue. Qadri is the principal of TSM’s Al-Ma’arij Institute in Taj Bagh area in the Lahore constituency from where Jalali plans to contest National Assembly election this year. “We haven’t yet entered into an alliance with the TLP but we hope to soon reach an agreement on seat adjustment with them and Sunni Tehrik,” he says.

Though, young activists of TLY’s youth front Al-Ghaliboon were certain that a seat adjustment agreement had been reached among all major Sunni (barelvi) parties, including apolitical and missionary Dawat-e-Islami. For them, the jalsa was ‘a power show against the blasphemers’ and blasphemy was a such a loose category that it covered the death sentence awarded to confessed assassin Mumtaz Qadri, Muslims’ participation in Holi, a Hindu religious festival, and statements in support of constitutional rights of the country’s Ahmedi community. These views were expressed Muhammad Babar Jalali, a native of Azad Kashmir who has been residing in Lahore because of a prayer leader job at a mosque in Batti Chowk area. He is also the TLY nazim-e-ala for UC-48.

Other youngsters looking after seating and lighting arrangements in the lawns spread from the Minar-e-Pakistan to the boundary wall of the Park said they were part of social media teams that managed Jalali Media and Tauheed TV, platforms from where the organisation disseminates its videos and memes.

These youngsters associated with the organisation’s mosques and social media teams shared a uniform appearance: their heads were covered in dark-coloured turbans similar to the one worn by Jalali and they were dressed up in immaculately pressed shalwar kameez suits. Those part of the security team shared a rather rugged look. They were without turbans, and were dressed up causally in Tees and trousers. Saqib Jalali and Ali Raza Jalali were amongst this group. Both came for the ceremony from People’s Colony Gujranwala where their families were associated Jalali for over a decade. They left education after high school. Ali Raza has since been running an auto repair workshop and Sajid tried his luck with work in Saudi Arabia. Economic distress from rising costs led him to return to Gujranwala a couple of years ago where he’s now learning sanitary work.

Like Bilal from Rasoolpur Jatha and Sajid from Pasrur, Saqib and Ali Raza and their families also supported N-League in 2013, but they intend to support Tehrik-e-Labbaik factions this year. “We will not vote for sher,” said Ali Raza as he gulped down the last few sips of soda from a 1.5 litre Coke bottle before throwing away the bottle on the lawn.