When honour is killed

Unless we change our medieval mindset, honour will continue to be murdered in this country

A former religious cleric may soon be indicted in a nearly two years old case of honour killing, which not only brought a wave of shock and fury in the nation but also prompted a stricter law against honour killing in the country.

Mufti Qavi, along with three other accused,is expected to be indicted in the next hearing of Qandeel Baloch case, after the district and sessions judge had directed in an earlier hearing for copies of charge sheets to be provided to the accused. The unavailability of the judge in the next hearing had resulted in a postponement. The primary accused in the social media celebrity’s murder, Baloch’s brother Waseem and relative Haq Nawaz, were indicted in December 2016.

Qandeel Baloch, who shot to fame as a social media sensation with her daring statements and videos, had posted pictures of herself with Mufti Qavi in a hotel room. Wearing the cleric’s cap and gaping at the camera in mock disbelief, the pictures proved quite thrilling to Baloch’s fans and critics alike. But Qavi also had to bear much criticism, along with the suspension of his membership of the Ruet-e-Hilal Committee and the National Ulema Mushaikh Council. Qandeel had also accused him of inappropriate behaviour.

Finding Qandeel Baloch’s behaviour ‘intolerable’, her brother Waseem had strangled Baloch, immediately admitting to the crime. Like many other brothers in Pakistan, Waseem sees his act as a means of bringing back honour to his kin, while the heads of his family — his parents — still grieve the loss of their daughter.

An honour killing is defined as the homicide of a member of a family or social group, due to the belief the victim has brought ‘dishonour’ upon the family or community. In an effort ‘to restore the reputation and honour’ of one’s family, over 4,000 cases of honour killings were reported in Pakistan between 1998 and 2004, while only in the year 2015, the number of women killed was over 1000.

Whether a tribal area or a metropolitan city, no man has a right to attempt taking the life of a woman or a man on the pretext of restoring one’s honour

But after Baloch’s murder, despite the parliament unanimously approving a stricter law against honour killings, which mandates life imprisonment for convicted murderers even if the victim’s relatives forgive them, the first three months of this year witnessed successive incidents of honour killing, mostly from lower Punjab and Sindh. A mother of five was shot dead by her husband over an alleged relationship with her relative in a village of Jacobabad.

In Larkana district, another woman and her alleged paramour were shot dead by her stepson. A man fled from his village in Tando Adam after killing his wife and sister for the honour. He had promised village elders he would not harm them after the women were brought back home. In another gruelling incident, a man murdered his wife with an axe in Badin.

The woman, alleged to have an illicit relationship with another man, was a mother of 10 children. In some of the cases, the murderers themselves surrendered to the police, proud to have restored ‘honour’ to their family. It is evident that the culprits have no remorse over their actions neither fear of punishment; for them, the so-called glory and pride of the family is far more important than a living soul. 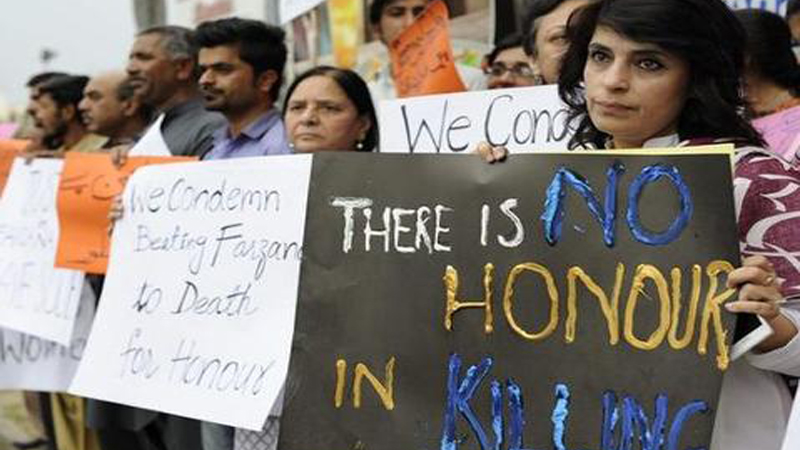 The length of time taken in most Pakistani cases is another deterrent in the way of justice and often prompts the complainant to give up, who is often unable to pursue further due to financial restraints or simply due to a change of heart.

Baloch’s heartbroken parents had vowed they would give Waseem no absolution. But distraught a year after her murder, they had even wanted their son to return home, at one point pleading that he is innocent, being only an accomplice to the real murderer — Baloch’s cousin, alleging cleric Mufti Qavi being the real hand behind the murder.

The Herald reports that since lifting the moratorium on death penalty in December 2014 after the attack on an army-run school, the state has executed an average of 3.5 prisoners a week. With the number of offences mandating capital punishment in Pakistan among the highest in the world — 28, the speedier trials are usually in the cases of blasphemy, apostasy and sometimes drug trafficking, with decisions in rape, murder and honour killing cases lagging way behind.

While it is still a breach of honour for many in Pakistan when women refuse marriage proposals, marry men of their choice and help others elope, it is not a matter of shame for them when these women are shot, stabbed, stoned, set alight, strangled or paraded naked to settle scores.

When a couple, having married off their free will, was strangled to death and secretly buried in Karachi early this year allegedly on the orders of a tribal jirga (assembly, of elders), Sindh Chief Minister Murad Ali Shah had said: ‘This is a metropolitan city, not a tribal area where jirgas are held. I would not allow such kind of barbarianism here’. Whether a tribal area or a metropolitan city, no man has a right to attempt taking the life of a woman or a man on the pretext of restoring one’s honour. It is not shameful for someone to decide for oneself, and it is not honourable for one to curb a fundamental right of the other. Unless we change our medieval mindset, honour will continue to be murdered in this country.

The writer is a senior media professional with experience in Broadcast Journalism. She can be reached at shamahf2@gmail.com