State sovereignty, that sovereign nation states are at liberty to pursue independent policies, especially economic and trade policies, is a myth.

It’s an evident that the neo-colonial powers are ruled by behemoth corporations whose wealth is measured in hundreds of billions of dollars, far more than the total GDP of many developing nations. The status of these multinational corporations as dominant players in national and international politics gets official imprimatur when the Western governments endorse the congressional lobbying practice of the so-called ‘special interest’ groups, which is a euphemism for business interests.

Since the Western governments are nothing but the mouthpieces of their business interests on international political and economic forums, any national or international entity which hinders or opposes the agenda of corporate interest is either coerced into accepting their demands or gets sidelined.

In 2013, Manmohan Singh’s government in India had certain objections to further open up to Western businesses. The Business Roundtable, which is an informal congregation of major US businesses and which together holds a net wealth of $6 trillion, held a meeting with the representatives of the Indian government and literally coerced the latter into accepting unfair demands of Western corporations.

The developing economies, like India and Pakistan, are always hungry for foreign direct investment (FDI) to grow further, and this investment mostly comes from Western corporations. When the Business Roundtables or the Paris-based International Chamber of Commerce (ICC) form pressure groups and engage in ‘collective bargaining’ activities, the nascent and fragile developing economies don’t have a choice but to toe their line.

State sovereignty, that sovereign nation states are at liberty to pursue independent policies, especially economic and trade policies, is a myth. Just as ruling elites of developing countries have a stranglehold and monopoly over domestic politics; similarly, the neocolonial powers and their so-called ‘multinational’ corporations control international politics and the global economic order.

Neo-colonial powers and so called ‘multi-national corporations’ control international politics
and the global economic order. Any state which doesn’t toe their line becomes a pariah

Any state which dares to transgress becomes an international pariah like Castro’s Cuba, Chavez’s Venezuela and Mugabe’s Zimbabwe; or more recently, Iran which was cut off from the global economic system from 2006 to 2015, because of its supposed nuclear ambitions. Good for Iran that it has one of the largest oil and gas resources, otherwise it would have been insolvent by now. Such is the power of global financial system, especially the banking sector, and the significance of petro-dollar because the global oil transactions are pegged in US dollars all over the world, and all the major oil bourses are also located in the Western financial districts.

The crippling ‘third party’ economic sanctions on Iran from 2006 to 2015 have brought to the fore the enormous power that the Western financial institutions and the petro-dollar as a global reserve currency wields over the global financial system. It bears mentioning that the Iranian nuclear negotiations were as much about Iran’s nuclear program as they were about its ballistic missile program, which is an equally dangerous conventional threat to the Gulf’s petro-monarchies just across the Persian Gulf.

Despite the sanctions being unfair, Iran felt the heat so much that it remained engaged in negotiations throughout the nearly decade-long period of sanctions, and the issue was finally settled in the form of the Iran nuclear deal in April 2015. However, such was the crippling effect of those ‘third party’ sanctions on the Iranian economy that had it not been for Iran’s enormous oil and gas reserves, and some Russian, Chinese and Turkish help in illicitly buying Iranian oil, it could have defaulted due to those sanctions.

Regarding the exploitative neocolonial system and the stranglehold of the Western financial services sector on the global economy, in April 2016, the Saudi foreign minister threatened that the Saudi kingdom would sell up to $750 billion in treasury securities and other assets if the US Congress passed a bill that would allow the Saudi government to be held responsible for any role in the September 11, 2001 terror attacks. 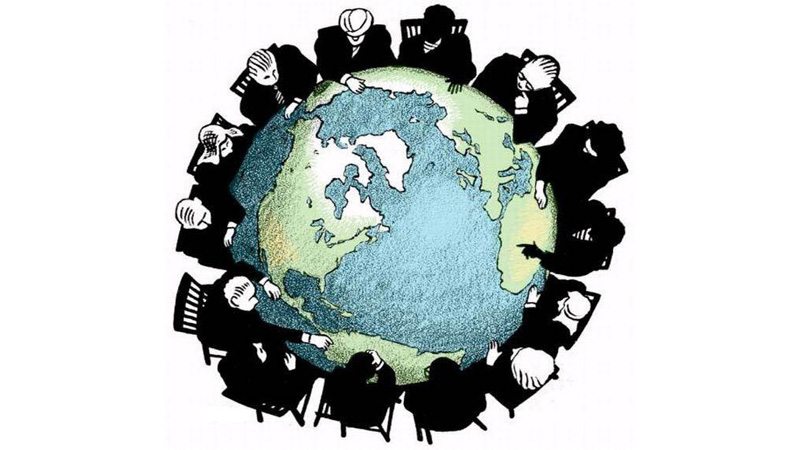 Finally, regarding the Western defence production industry’s sales of arms to the Gulf Arab States, a report authored by William Hartung of the US-based Centre for International Policy found that the Obama administration had offered Saudi Arabia more than $115 billion in weapons, military equipment and training during its eight years tenure. Similarly, during its first international visit to Saudi Arabia in May last year, the Trump administration signed arms deals worth $110 billion, and over 10 years, total sales could reach $350 billion.

The author is an Islamabad-based attorney, columnist and geopolitical analyst focused on the politics of Af-Pak and Middle East regions, neocolonialism and petro-imperialism