The Jadav affair and Indian frustration

The dust hasn’t quite settled after Kulbushan Jadhav’s meeting with his family. However, the release of a new video message has made him the king of Indian TV screens once more. Indian journalists and defence experts, have hysterically devoured the most trivial aspects of this meeting in an attempt to be imaginative and creative. This misguided attempt has made them a laughing stock for international audiences.Besides, recent incidents in India clearly show everyone the cost of expressing sane and balanced opinions.

Two fundamental but simple questions are of utmost importance in order to comprehend the intricacies of the Jadhav situation. Firstly,why was their such a hullabaloo by the Indian media and the Indian Ministry of External Affairs if Jadhav is not a commissioned officer of the Indian Navy working for the Research and Analysis Wing (RAW)? Secondly, how are captured spies and terrorists treated by India itself? How many times has the Indian government arranged meetings between captured spies and their families at the Ministry of External Affairs?

Jadhav is a serving officer of the Indian Navy. His current legal status is that of a convicted terrorist and spy. It is Pakistan which is most concerned about the safety and well being of its prisoner until this matter reaches its logical end.Anyone can see the recent 40-minute long Jadhav family reunion through a different lens.Some may argue that a mother should have been allowed to embrace her son without a glass panel keeping them apart. A few may even advocate for some private moments between husband and wife as they could not see each other for years. But such criticism emanating from the spokesperson of Indian Ministry of External Affairs is completely devoid of realism.

The whole subcontinent has too much to gain from the dividends of Pak-India friendship. Jadhav’s meeting with his family on the birthday of the father of the nation, which was also Christmas day, was very symbolic in nature and could serve as an ice-breaker between two neighbouring countries to hold formal talks. But the cynicism won on December 25, 2017 and ignoring the extended hand of friendship, India preferred to continue on its reckless collision course. The humanitarian gesture degenerated into a diplomatic spat and one can see the mountain of distrust standing between the nuclear-armed neighbours.

Some harsh questions from reporters present at the scene can be blamed for making this occasion controversial. However if we look through the prism of regional developments and ongoing Indian policies, this had to happen either way. It is a reporters’ job to question and the Indian media itself would have performed even worse in similar circumstances. Therefore, even if Pakistani media was not present to cover the event, the story would have been spun in other imaginative ways. The reasons for Indian exasperation lie somewhere else.

Some may argue that a mother should have been allowed to embrace her son without a glass panel keeping them apart. A few may even advocate for some private moments between husband and wife as they were seeing each other after years. But such criticism emanating from the spokesperson of Indian Ministry of External Affairs is completely devoid of realism

Indian frustration can be partly explained by Pakistan’s regressive foreign policy over the last few years while Indian Prime Minister Narendra Modi, lead a hyperactive campaign to isolate and malign Pakistan in the international community. Whenever it was possible, Nawaz Sharif, as de facto foreign minister, lent him a helping hand and allowed him rise as a vanquisher. If he was still prime minister, it may not be that far-fetched to assume that he would have declared Jadhav’s family as state guests.

Though disqualified by the Supreme Court, as the president of PML-N, he still calls the shots and runs the affairs of the government through his tested confidants. Thus the Indian government and media might have expected that Pakistan, as usual, will give away something to hail this meet as an Indian victory. But Pakistan offered nothing more than the agreed upon meeting and foiled any potential attempts by RAW’s to use Jadhav’s wife as a mule to communicate with its spy.

Indian vexation is partly explained by the failure to reduce Pakistan to the levels of Bangladesh and Nepal. Despite India’s best efforts to isolate its Western neighbour, Pakistan is back in game as an important player in regional and global affairs with the advent of the Pakistan China Economic Corridor (CPEC). The US is free to declare India as its strategic partner in the Indian ocean, but in the presence of an assertive Pakistan, the dream of Indian hegemony cannot be materialised. 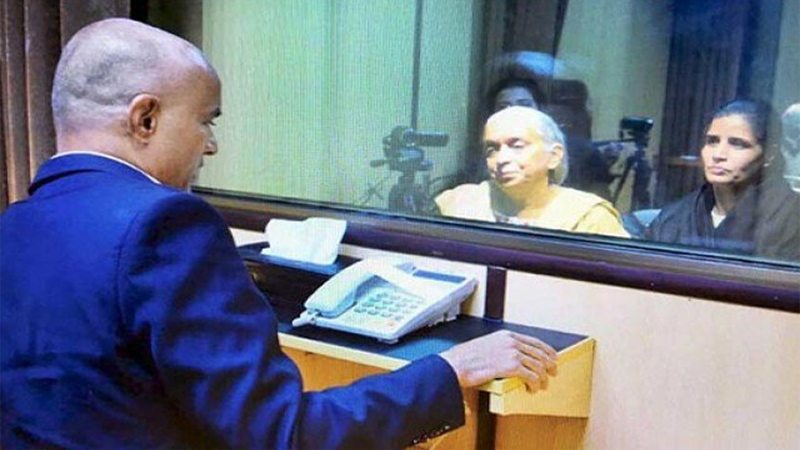 Therefore, in abysmal irritation, India responded Pakistan’s humanitarian gesture with the martyrdom of three Pakistani soldiers hours after the meeting. Following the secret meeting between National Security Advisors of the two countries in Bangkok on November 26, Pakistan announced the release of 145 Indian fishermen as a goodwill gesture.  In response, India refused to issue visas to Pakistani pilgrims to attend the Urs celebrations of revered Sufi saint Nizamuddin Auliya. Not only that, India also denied visas to patients for treatment and ruled out any possibility of an India-Pakistan cricket series.

Realistically speaking, India’s positive reception of this event would have been more surprising. In recent years we have repeatedly expressed insensitivity towards our national pride and dignity. For example, if the delicate fingers of our beloved prime minister could manage to scribble signatures on a printed letter, Barack Obama, could have ordered the handing over of Aafia Siddiqui, a Pakistani citizen in US custody, to Pakistan in final days of his presidency.

Lt-Col (Retd) Habib Zahir, forgotten son of the land, was kidnapped from Nepal in April 2017 and sights are still eager to see the members of civil society demanding his release with candles in hands or a few words from DG ISPR. Indian atrocities in occupied Kashmir have lost the effect to shove our national conscience fearing that it might cause few lines on Modi’s forehead. If complete negligence regarding national interests does not appease Indian government, expecting a breakthrough from that meeting does not make any sense.

Since Kulbhushan’s meeting with his mother and wife, events are unfolding at a faster pace. Donald Trump hurried to solace its new strategic partner and greeted old ally with a vituperative tweet. This was followed by suspension in US military assistance to Pakistan and India is finding itself temporarily in seventh heaven. If the war in Afghanistan can’t be won without Pakistan’s full support, jittery relationship between US and Pakistan can only turn Afghanistan a quagmire for the former. Thus the current episode of Pak-US relationship will soon be over. Therefore, in the meantime, functionaries of South Block should take a break, watch some Bollywood movies, or at least read the open letter by Yasin Malik about the way India treats its prisoners.