The message Army Chief Gen Qamar Javed Bajwa’s briefing to the Senate Committee has delivered to the global community is that Pakistan has taken an unconventional turn off the conventional highway of international relations. The fact that his predecessor Raheel Sharif is coming back home from the Kingdom of Saudi Arabia is not indication of a haphazard attempt by the conventional players of the power game to lock the stable door after the horse has bolted.

The closed-door session meant that its proceedings are exclusively for those present in the hall. But the senators made a breach through which they spilled the beans the moment the doors of the hall parted. TV channels had a field day reporting one story through many mouths.

They reported that Bajwa had told the senators that if Iran with her population of 80 million can stand up to the US, why cannot Pakistan with her population of 200 million? The general was well-prepared for this briefing, which lasted over three hours. None of the senators in the audience reported feeling unsatisfied. Rather, he was too convincing to be true. It shows that his staff has put in some real hard work on time to make this event a success.

No surprise then that those who made a big fuss on a particular exclusive story on Pakistani media is in routine of reporting about closed-door sessions. These same people were also fired up about digging out the details behind this closed-door Senate meeting but they also did live commentary on it. It is because the question of compromise on the exclusivity of both these events is similar but the nature of the content is different. 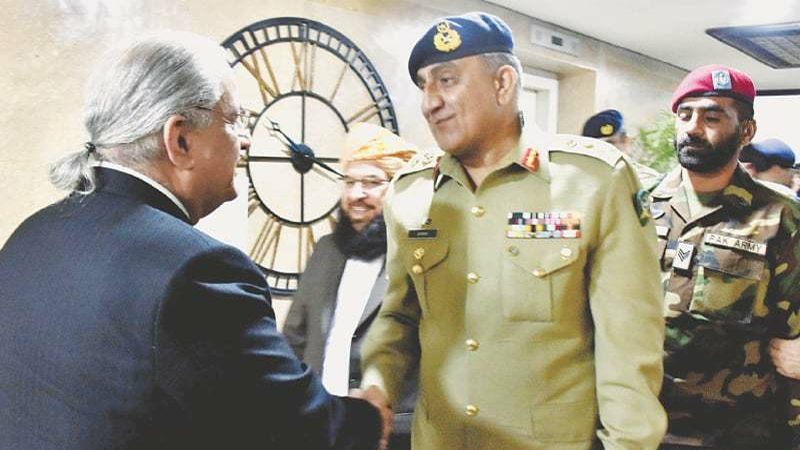 Bajwa’s statements at the Senate Committee do not mean that he wants to get closer to Iran. After all, memories of Raheel Sharif publicly defrocking incumbent Iranian President Hassan Rouhani are not distant. While Rouhani was still in Islamabad, tweets were flown officially that Gen (Retd) Sharif had chastised him during their meeting on the question of RAW’s involvement in subverting activities in Pakistani Balochistan. It was a public humiliation for the visiting Rouhani, who brushed it aside in his press conference contending that “whenever Iran comes closer to Pakistan such rumours are spread.”

After his return, two things happened. First, Raheel Sharif was hired by the Kingdom to lead an international military alliance, whose terms of reference could not yet be laid out. However, KSA has bombed Yemen into one of the world’s worst humanitarian crisis on multiple counts, according to the United Nations. When Raheel Sharif was leading the Pakistan army, he launched an operation against militants in Federally Administered Tribal Areas (FATA) at such a massive scale that fault lines surfaced among provinces, bulging at the seams to accommodate the Internally Displaced Persons (IDPs).

From 1947 to 1979 till the Iranian revolution, Pakistan and Iran competed for American attention. Pakistan was not the preferred country until the Ayatollah came to power in Iran

The second development was the formal launch of Chabahar Port by Rouhani, allowing India to bypass Pakistan for trade with land-locked Afghanistan. Iranians are accustomed to wearing goodwill symbols. Likewise, Rouhani stood Pakistani representative Hasil Bux Bizinjo next to him in the photo op on launch of the port. Trade volume between Iran and India has always been greater than Iran and Pakistan.

After the launch of the port, Kabul has been encouraged to unilaterally abandon the Afghan Transit Trade Agreement, seeking a new arrangement that ensures India’s participation. To deal with the off and on closure of border by Pakistan to cajole Afghan government, Kabul has laid its intention of accessing World Trade Organisation (WTO) bare. So in this scenario, the conventional analyst is justified concluding that Bajwa would not talk of warming ties with Iran, which is in league with our India and Afghanistan.

But the general seems to have set his eyes on a big piece of the cake. From 1947 to 1979 till the Iranian revolution, Pakistan and Iran competed for American attention. Pakistan was not the preferred country until the Ayatollah came to power in Iran.

However, after getting a bloody nose at the hands of the Taliban in Afghanistan, Iran found itself closer to the ‘great Satan’, horrified at the prospect of an unfriendly government in Kabul. The US was also ready to play ball with the Islamic Republic, striking with her the nuclear deal affronting kings of the Gulf and Israel. For Pakistan, it was a win-win situation. But positions changed on the global chessboard after election of Donald Trump as POTUS. If after Taliban rule, Iran found itself closer to ‘great Satan’, after Trump the US found itself closer to ‘axis of evil’ in the region, along with India and Afghanistan.

In the greater game, Pakistan cannot afford being cast aside as an extra. To be in the game, she needs to push for as much room as she can get. China has already spoken in favour of Chabahar Port and engaging India in One Belt One Road project.

After the bubble of the US influence was burst at the UN General Assembly vote on Jerusalem, Pakistan’s choices became clearer than before. It has China on its side and by co-opting Iran, it could gain in the region what it could not by confronting India and Afghanistan. The general knows how to make the best of a bad job which is why he told the senators that he trusts the Parliament in drafting a policy for India. Against this backcloth, it seems Raheel Sharif will go back to his job after spending the holidays at home.

The writer is an ICFJ Fellow. Email: Hassan.shehzad@iiu.edu.pk