Russian President Vladimir Putin has ordered the partial withdrawal of his forces from Syria after almost two years of operations against terrorists in the country. Putin made this announcement in a surprise visit to Syria at the Khmeimim Air Base on Monday.

Putin announced that Syrian and Russian army operations had succeeded in defeating and destroying the Islamic State, taking control back from the group in most parts of the country. The visit carried great significance because it was the first of its kind by a head of state since the war in Syria started seven years ago.

In 2015 Assad was on the cusp of losing total control of his country; he asked for Russia’s help, which subsequently resulted in the first Russian strike against IS in September that year. Not only did Russian operations turn the tide in Assad’s favour, they also served as a flashpoint in establishing Russian influence in the region.

According to Syrian and Russian media, capturing two cities — Aleppo and Deir ez-Zor — highlighted the Russian campaign against IS. The liberation of Aleppo — Syria’s largest city — was the first major victory in 2016. Before Russian intervention, the city was divided into two equal halves controlled by Syrian forces and IS. However, a bloody war — involving shelling, airstrikes and tactical operations — saw the liberation of the city and exit of IS in December 2016.

Secondly, the recapture of Deir ez-Zor city was symbolic due to the city’s siege by IS for more than three years. The siege was finally broken in early September 2017, after intense air and ground warfare against the IS. Russia considered this victory, a turning point in the war against IS, however it also lost high ranking military officers during the operation as a result of shelling from the IS on Russian command point. In addition to this victory, all the major settlements alongside the Euphrates River have also been liberated by the end of November 2017.

Whatever the future might hold for the region, and for Syria specifically, the corridors of global politics and policy making must brace for a new, more confident, Putin

However, there is still much to be done in the country. Both Russia and Assad have so far failed to ensure a lasting negotiated settlement with the Syrian rebels, especially in the rebel-held suburbs of Damascus where, reportedly, children under siege are starving. Additionally, Putin’s critics believe that this victory lap in Syria is not only pre-mature, but also show boating to strengthen his bid for the Russian presidential elections in March 2018. Putin has also been criticised for unconditionally supporting Assad even at times when the latter has been accused of using chemical weapons against his own people. 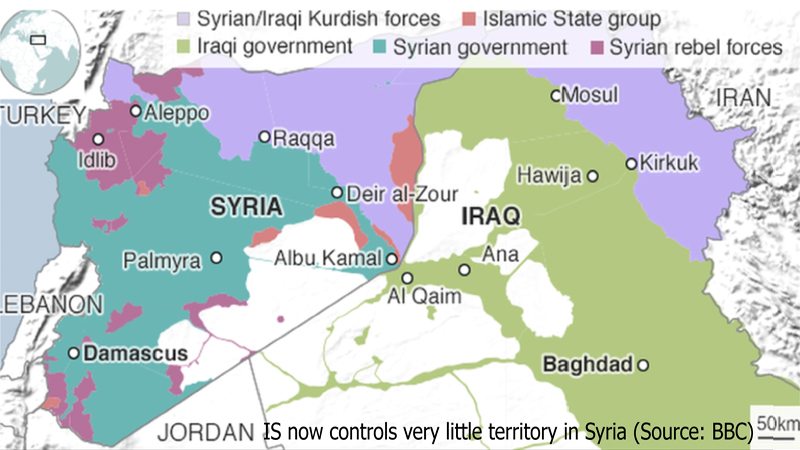 With significant success of both the Russian and Syrian forces, it is yet to be seen what the future, in terms of peace, holds for Syria. Russia has already spearheaded peace efforts, calling on regional powers — mainly Iran and Turkey — to help negotiate a peace deal between the Syrian rebels and the Assad government. In a similar vein, Russia has also established the Russian Reconciliation Center for Syria to speed up negotiations between the Assad government and all rebel groups operating in the country. In short, Syria, at the moment, is all about Russia. Putin has effectively used the country as a launching pad to stamp his authority and hint towards his country’s future regional and global ambitions.

Therefore, whatever the future might hold for the region, and for Syria specifically, the corridors of global politics and policy making must brace for a new, more confident, Putin. A Putin who previously shied away from complexities of transnational security issues. But, now, within a few years, not only has he annexed Crimea, intervened in Syria, and re-established his country’s hold over ex-Soviet states, he has also ventured into Afghanistan luring the Taliban to negotiate peace, with the anticipation of using the group as a neutralising force against the growing threat of IS in South and Central Asia. This renewed confidence in his country’s potential global role was also witnessed in his speech in Syria, where he announced:

Our Armed Forces and our defence contractors have shown the growing power of the Russian Army and Navy, and the high combat capability of the various military units. The two bases, in Tartous and Khmeimim, will continue to operate on a permanent basis… If the terrorists raise their heads again, we will deal unprecedented strikes unlike anything they have seen.

It is obvious that Putin plans to stay — probably for long — in Syria. With USA’s recent announcement of withdrawing all support for the Syrian rebels, the country is virtually a Russian — and to some extent Iranian — playground. However, whether Russian success in Syria is a reality, or premature show boating, only time will tell.

The writer is a PhD (Politics) Candidate currently pursuing his studies in Australia. He has previously completed his Masters in Public Policy and Conflict Studies from Germany. He also consults Islamabad-based Security think tank, Centre for Research and Security Studies. He is specialising in Indigenous conflict resolution and counter insurgency. He tweets at @faruqyusaf