We founded NCA with the sole aim of promoting performing arts: Samina Pirzada 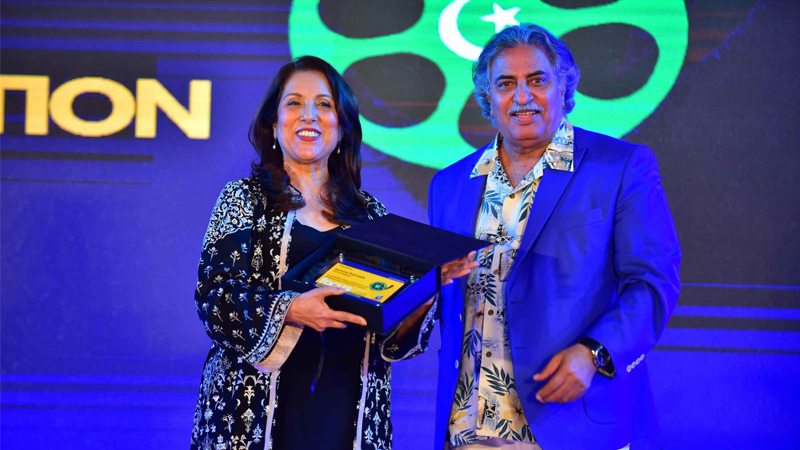 On the second and final day of FocusPK, the production and entertainment conference turned into a Film Market where eight selected films were screened one at a time in front of potential investors.

This took place on Sunday at the all-new EDC campus of Iqra University in Karachi.

Each film was introduced by the project filmmaker to the industry professionals present in audience and after the screenings were over, the talent and trade had the opportunity to network and meet. The whole purpose was to highlight upcoming talent and open up window of opportunities for them. The selected films were curated by a jury of industry directors such as Jamshed Mahmood Raza, Nabeel Qureshi, Asim Raza, Wajahat Rauf, Nadeem Baig, Marina Khan, Mehreen Jabbar and Angeline Malik.

The first film to be screened was ‘Itwaar’ chosen by Nadeem Qureshi and directed by Fahad Sarfaraz, a 23-year-old student specialising in Film at Beaconhouse National University. His film, as the title suggests, was about the happenings of a married couple on a Sunday who argued over the pressing marital topic of whether having the first child affects marriage or not. The second film ‘Main Kaun Hu?’ chosen by Wajahat Rauf and directed by Faizan Shoro, a young filmmaker and film enthusiast studying at Iqra University followed the storyline of a woman trying to find herself, her place, her identity in the society and how the journey she embarks on ultimately shows her the real face of the society along with their level of acceptance. The third film ‘Taqseem’ chosen by Mehreen Jabbar and directed by Sirajus Salikin, a Karachi based filmmaker and screenwriter commented on the violent partition of the subcontinent and the themes of violence, power and dishonesty were explored while having a quite dark and morbid cinematic approach with almost static yet powerful visuals. The fourth film, ‘What a Waste!’ chosen by Asim Raza and directed by Shahrukh Khan, an avid writer and filmmaker based his film on the subject of gold panners and unravelled an ancient profession that was preserved and passed down from generation to generation in a growing urban landscape. The fifth film ‘Addico’ chosen by Angeline Malik and directed by M Daniyal Fazal was 3D animated that showed what follows through when two distinctly different worlds, inside and outside the mobile device come into conflict. ‘Fankaar’ the sixth film chosen by Marina Khan and directed by Kashaf Rehman, the co-founder of Twin City Films took the audience on a journey to explore the entertainment scene of the country through an average Pakistani’s point of view in hopes to discover what lies beyond digital media. The seventh film, ‘Panaah’ chosen by Jami and directed by Saadullah Khan, a film graduate and distinction holder from National College of Arts (NCA) told a purely visual narrative of a man living in isolation, taking refuge on a mountain and how life catches up to him just as brutally as it is unavoidable. The last film ‘Bali’s 41’ chosen by Nadeem Baig and directed by Rakesh Karera, a film graduate from the Shaheed Zulfikar Ali Bhutto Institute of Science & Technology told a story of person living by himself wanting to celebrate his 41st birthday with loved ones and how the failure of doing that results in him committing suicide.

After the screening, Samina Pirzada and Shoaib Mansoor were honoured for their lifetime work in the industry. “My husband and I are founding members of National College of Arts, and we started this with the sole aim of promoting performing arts – this was our dream and it feels exceptionally great to see it bearing fruits,” said Samina Pirzada upon receiving the award. “If we continue opening windows of opportunity and promoting young talent by providing them with platforms such as Focus, if short-films keep being screened and getting the kind of attention they deserve alongside mainstream films, there is no doubt in my mind that Pakistan will take the Film Industry by storm. We have so much potential to make it big, I know it and I feel it too.”

A musical performance by the house band of Iqra University marked an end to a remarkable two-day event, which hoped to provide the passionate young film enthusiasts with a platform where they can showcase their talent while also learn from the industry experts. Amongst attendees were Asim Raza, Samina Pirzada, Usman Pirzada, Ahsan Khan, Wajahat Rauf, Marina Khan, Javed Jabbar, Hameed Sheikh, Misbah Ishaq, Samina Ahmed, Angeline Malik, Sajid Hassan and many more.