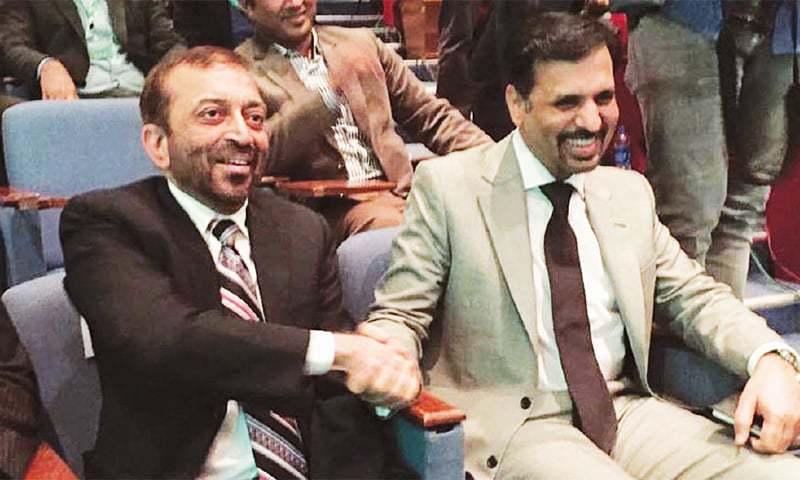 Pak Sarzameen Party (PSP) leader Mustafa Kamal is yet to recover from the acrimonious divorce after a one-night stand with Muttahida Quami Movement – Pakistan (MQM-P) leader Dr Farooq Sattar. While he had used an opportunity to react to allegations hurled by Farooq Sattar during his U-Turn to and from politics, Kamal took his criticism on the former comrade a bit too far.

On a popular current affairs talk show, Mustafa Kamal, while discussing his rift with Farooq Sattar, compared the latter’s behaviour with that of women: auraton kee tara rona dhona, chooriyan torna, cheel ki tarah chillana (crying like a woman, smashing bangles, shrieking like an eagle). When the host of the show intervened by remarking that it is “not right to refer to women like that since women are a powerful group”, Kamal was taken aback. Instead of using a more cautious approach, he mumbled about knowing some ‘weak women’, to which the host reacted again by saying that men can also be weak.

While the prompt cheek-in-the-tongue reaction was obviously correct and necessary, a gentle reminder of the day when Kamal also showed his ‘weaker’ side was missing. On his return from Dubai after self-exile, while narrating his reasons for leaving politics earlier and his decision to come back, when he was exposing his former leader Altaf Hussain, Mustafa Kamal had shed quite a few tears. However, he was fortunate enough not to be labelled feminine for his heart wrenching confessions.

But it is not the tit for tat remark which is a matter of importance. It is the persistent sexist attitude of our society which reappears quite occasionally, and mostly in ugly forms. And when it comes from the country’s lawmakers, it becomes further deplorable. Only a few months ago, Minister of Foreign Affairs Khwaja Asif, who was then the Defence Minister, appeared to ridicule political defections to PTI by casting slurs against female politicians Shireen Mazari and Firdous Ashiq Awan. Almost exactly a year ago, Khawaja Asif had subjected Mazari to offensive language during a National Assembly session, with the Speaker Ayaz Sadiq forced to expunge those words from the Assembly proceedings.

When Mustafa Kamal taunted Farooq Sattar for showing ‘feminine traits’, he reflected the societal attitude when boys, from an early age, are taught not to show too much emotion and to ‘be a man’. Girls are taught to be gentle and speak softly, while boisterous boys screaming and running around are dismissed with the attitude of ‘boys will be boys’. In our patriarchal society, gender roles are still the same as they were centuries ago, with men being the bread earners and women the home makers, baby sitters and care takers. And when rare examples of role reversal emerge, they are generally scoffed and frowned upon, with the same sexist remarks like choorian pehan kay rakhna (wearing bangles) and haathon pay mehndi laga lena (applying henna on hands) directed on men.

Since gender inequality is still rampant in our society, it is not surprising that the World Economic Forum placed Pakistan as the second worst country on gender equality in its Global Gender Gap index released this year. Pakistan has shown only a slight improvement towards the educational attainment while in all other areas i.e. economic participation and opportunity, health and survival and political empowerment; it has worsened over the decade.

The sexist attitude that we are all exposed to since childhood looms over us in various shapes and forms throughout our life. Whether in domestic responsibilities or in employment contracts, rightful inheritance to gender pay gap, social attitudes to political misogyny, women are reminded that they are the weaker sex. We need to nurture our next generations with a different mindset. We need to start believing and accepting that if not all, in many ways, men and women are equal. We need to ‘manhandle’ misogyny, with the same attitude which this sexist word is defined with: to handle roughly!