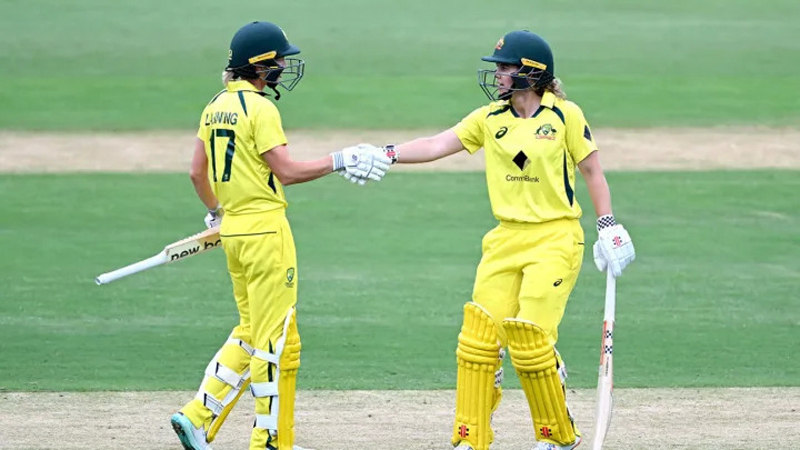 LAHORE: Returning captain Meg Lanning and teenaged debutant Phoebe Litchfield struck half-centuries in Australia’s comfortable eight-wicket victory over Pakistan in a truncated women’s ODI series opener at Allan Border Field in Brisbane, Australia on Monday. Chasing a revised target of 158 in 40 overs, Lanning made 67 off 76 balls after coming to the crease in the first over following the dismissal of opener Beth Mooney. There had been much anticipation over the return of Lanning from a five-month hiatus — she hadn’t played since the Commonwealth Games after taking personal leave. She was made to work early against probing bowling from quicks Diana Baig and Fatima Sana as Pakistan eyed a first-ever victory over Australia.

Lanning had a reprieve on six when Muneeba Ali dropped a straightforward chance at point off the bowling of Sana and she made them pay almost immediately with a boundary. She was in command from there on, back to her belligerent best as she unleashed sweep shots to effectively thwart the spin, and looked good for more before falling with victory in sight. Having survived a near run-out, Lanning was dismissed in tame fashion, caught down the leg side off spinner Omaima Sohail.

Lanning had combined well in a century partnership with 19-year-old Litchfield, who impressed with a slew of thunderous boundaries in her 92-ball 78 not out. After Lanning’s dismissal, she smashed Sohail for two boundaries and then a six before hitting the winning runs in the 29th over to cap a stellar performance. A 90-minute rain break shortly after play started reduced the contest to 40 overs per side with bowlers able to bowl a maximum of eight overs each. Australia’s spinners papered over a patchy bowling effort to restrict Pakistan to a modest total of 160 for 8. Lanning used eight bowlers with Australia’s quicks loose at times in an attempt to conjure swing. Spinners Ashleigh Gardner, Jess Jonassen and Alana King were the standouts, all menace during the middle overs with sharp turn, while Mooney was excellent behind the stumps in Alyssa Healy’s absence.

Veteran Nida Dar anchored the innings with a well-compiled 59 to notch Pakistan’s highest individual ODI score in Australia. She was almost dismissed on 37 after disastrous running between the wickets saw her at the non-striker’s end alongside Kainat Imtiaz, who was adjudged run out. Dar’s late fireworks provided a lift, but she lacked support as several batters were unable to capitalise on strong starts. Skipper Bismah Maroof hit several beautiful drives before falling for 28 to a terrific catch from Mooney after gloving Gardner. No. 4 Sohail started typically aggressive with consecutive boundaries through point. But the cavalier approach led to her dismissal when she loosely drove to point to gift seamer Tahlia McGrath a wicket in her first over.

Before the rain delay, quick Darcie Brown claimed two wickets but her radar was off with a slew of wides as she pressed for movement. With the T20 World Cup looming, the three-match series leads into a trio of T20Is to wrap up Pakistan’s first bilateral series in Australia since 2014. It was an important hit-out for Lanning with Australia missing Healy, who is sidelined for the ODI and T20I series against Pakistan with a calf injury. In their first ODI since winning last year’s World Cup in April, Australia started the new edition of the ICC Women’s Championship in style.