Bilateral trade to get major boost with Pak delegation’s visit to Ethiopia: envoy 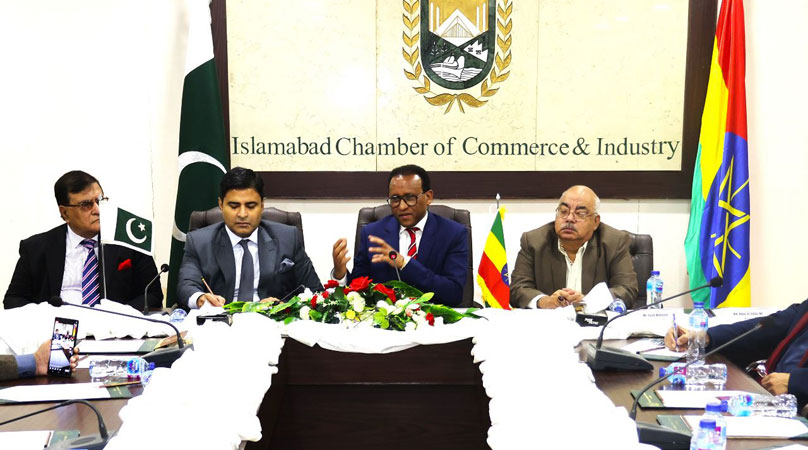 Ambassador of Ethiopia Jemal Beker Abdula on Saturday urged Islamabad business fraternity to join in the business delegation which was set to fly to Ethiopia by next year start for exploring Ethiopian markets.

Addressing the media, he said the business delegation would fly to Ethiopia in the maiden flight of Ethiopian Airlines which was all-set to start its operation in Karachi by the start of next year.

Flanked by Ahsan Zafar Bakhtawari, President of the Islamabad Chamber of Commerce and Industry (ICCI), the Ambassador said that it was high time for Pakistani investors and businessmen to enter Ethiopian markets which offered lucrative investment and business opportunities in the diverse economic sectors such as agriculture, agro-processing, manufacturing, mining, textile, health sector and tourism.

“Our government opened the financial sector some three months ago and now looking forward to the establishment of traditional banks and stock exchange in Ethiopia,” he said, adding that Ethiopia was becoming a manufacturing hub of Africa producing the cheapest clean energy in the world.

He said that Ethiopia was exporting clean energy to Kenya, Sudan, and Djibouti, while efforts were afoot to sell it to other countries and ensure regional integration through energy grid. “My country has almost completed the Ethiopian Grand Renaissance Dam which is being built on the Nile River and set to produce 6,500 MW of electricity. Many others are in vault as Ethiopia is striving to integrate the African region through energy, trade, air service, and tourism connectivity.”

He said that Ethiopia was energy tower of Africa hence becoming the manufacturing hub. We have already established multiple manufacturing zones for different industries including textile, pharmaceutical, laser and laser products, he added.

The Ambassador said that Ethiopia was geographically located at a very important position close to the Middle East, the Mediterranean Sea and Red Sea. For Pakistan, Ethiopia would be a gateway to Africa, he said.

He said that Ethiopia attached great importance to advancing the bilateral relationship with Pakistan and opening of our mission in Islamabad reflected our commitment in this regard.

He said that Ethiopia and Pakistan established their diplomatic ties in 1958 and Pakistan set up its embassy in Ethiopia in 1973. Both countries have been enjoying the cordial relations since then and working on bilateral, regional and global issues in a remarkable way. “I express my gratitude to the people and the government of Pakistan for extending support to Ethiopia for non-permanent candidacy in the United Nations. I am also grateful to the Government of Pakistan for standing by Ethiopia in the UN Human Rights Council over the human rights issues in northern part of Ethiopia which is politically motivated resolution.”

He said that both the countries were part of the UN Peace Keeping Mission in Congo, Liberia, Burundi, Somalia and South Sudan which showed convergence of their interests for international peace and security. Both the governments have been working on many agreements which would be instrumental in increasing political cooperation, economic engagement and people-to-people contacts through tourism promotion, the envoy said.

We have identified the products which will be exported to my country from Pakistan. Pakistani business community can contribute to the Pakistan’s economic development by exporting rice, pharmaceutical products, medical equipment, sports items and construction material to my country, he said and added, the Government of Pakistan can import agricultural products such as coffee, tea, pulses, oilseeds and vegetables from Ethiopia at affordable prices which will eventually help it mitigate the growing demand of the edible. Giving the similarities between the two countries in different aspects, he said there is a marriage of convenience between them which is reflected in the demand made by the heads of both the states at the COP27 for establishment of a climate fund.

Ethiopia and Pakistan share similarities in many ways as both are heirs of ancient civilizations, influential diaspora and share social, cultural and political values. It has a federal system like that of Pakistan which holds elections at regular intervals, the Ambassador told.

He said that Ethiopia was on upward trajectory registering a double-digit economy which had transformed the livelihood and well-being of its citizens. It had developed a home-grown economy as a result of the reforms initiated in 2018.

The envoy said that the steps taken to address the bottlenecks for FDI, trade and business services at micro, macro and structural level had started paying dividends especially in five major economic sectors including agriculture, manufacturing, mining, tourism and ICT.

He said that the government of Ethiopia attached great importance to the agriculture sector and has taken multiple steps to enhance production and productivity of this sector through technological transformation innovation. For livelihood, he added around 80 percent of population is largely dependent on the agriculture sector which makes 90 per cent of exports and 45 per cent of the Gross Domestic Product.