The six best U2 stories from Bono’s memoir ‘Surrender’ 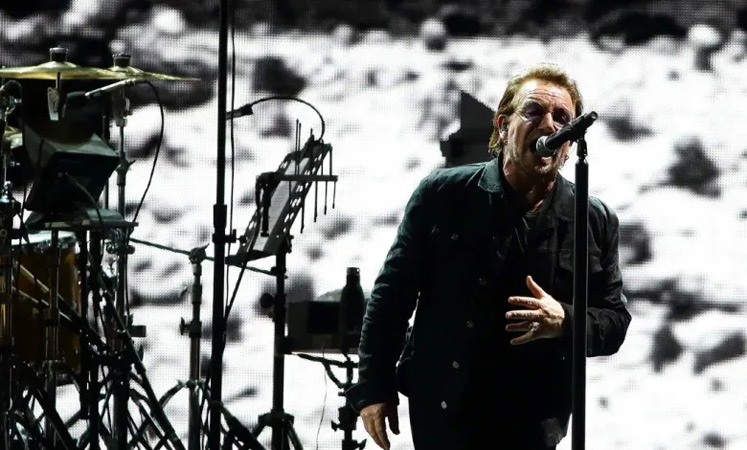 Surrender makes for an instructional title to Bono’s memoir. There’s a lot to surrender to in this book, the first by the lead singer of arena-rock giants U2. It’s over 550 pages; the prose veers from profound to clunky; there are extended diversions from U2 to talk about his family and his political work; passages praise figures including George W. Bush, Bill Clinton, and Bill Gates; and, on top of it all, the chapters are accompanied by 40 charmingly lo-fi sketches. Sure, Bono has earned the right to write his memoir however he pleases – he’s one of rock’s best singers and songwriters and has lived a full life. But if you’re not ready to take that leap of faith, don’t worry: We’ve found what you’re looking for with 6 of the best U2 stories Bono reveals in the memoir.

U2 faked their first audition with a Ramones song.

Surrender makes clear early on that Bono had that bravado from U2’s first days. One example: the band’s first audition, for a children’s-TV program called Young Line, in 1978. U2 had original songs at the time, but the band had been arguing about what to play – so when the producer asked for an original, Bono passed off “the not-very-but-quite-famous Ramones tune ‘Glad to See You Go'” as a U2 cut. The band made it onto the show, where they played “Street Mission,” an early song of theirs. “No one noticed,” Bono writes. “Another miracle attributable to Joey Ramone.”

Bono wanted John Lennon to produce Boy before he died.

Speaking of confidence, how’s this? Bono had been writing a letter to Lennon in 1979, months before his assassination, to ask him to produce the band’s debut album, Boy. “We’d written a song called ‘The Dream Is Over’ sparked by his throwaway explanation of the demise of the Fab Four. Now, as our dream was beginning, the Beatles’ dream was over,” Bono explains. Instead, 1980’s Boy began U2’s early partnership with Steve Lillywhite, who also produced the two following albums, October and War.

The Edge thought God wanted him to quit U2 – but their manager said he didn’t.

U2’s struggles to square their Christian faith with their rock-star life, especially in the early years, have been well documented. But Surrender sheds more light on the moment when their guitarist, the Edge, felt God was calling him to quit the band before the 1981 release of October. Bono decided he wouldn’t stay in the band without the Edge, but what ultimately kept them together was a quick-witted response from their longtime manager, Paul McGuinness (an atheist).

Jimmy Iovine talked U2 out of using “Where the Streets Have No Name” in that car commercial.

Another story Bono retells is of the band receiving a $23 million offer from a car company looking to use “Where the Streets Have No Name” in an ad spot around 2000. He famously turned down the offer – at the advice of Interscope co-founder Jimmy Iovine, of all people, he writes. Bono remembers Iovine saying, “You can take the deal. But you just have to prepare for that moment when you say ‘God walks through the room’ being known instead as ‘Oh, they’re playing that car ad.'”

Flood once convinced U2 to perform a studio session naked.

A producer with unconventional methods is nothing new. But this is still quite the picture: Bono recalls Flood, one of the band’s core producers, once suggesting they record a session while naked “to inject the moment with levity.” The band (and production team!) performed with nothing but gaffer tape over their “bits and pieces” – “All in the cause of art, you understand,” Bono writes.

Bono’s experience in the rock world would help him succeed at politicking in his second career as an advocate for AIDS relief. (He might be the only person to bond with noted conservative John Kasich over Radiohead, he reveals in Surrender.) After meeting Barack Obama as a senator, Bono would become friends with him during his time in the White House – even playing him mixes of new U2 songs (to lobby for inclusion on his playlists, surely). “I was taken by his intellectual curiosity as to how music was put together,” Bono writes.