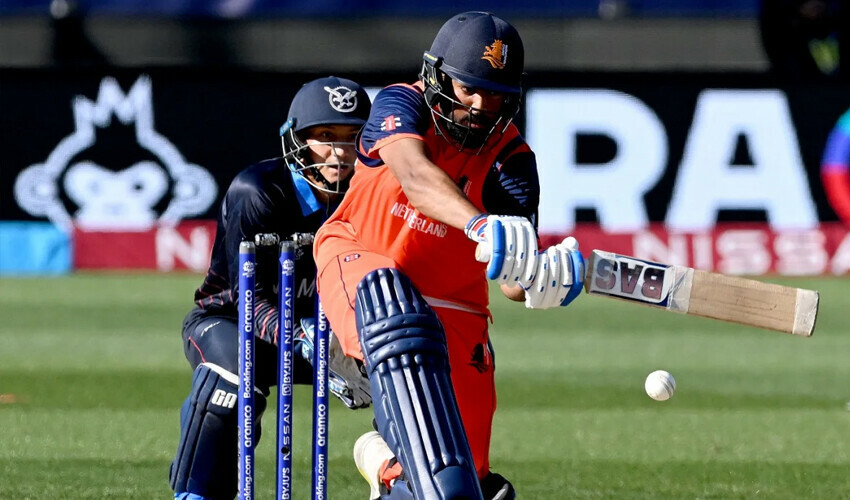 Bas de Leede took two wickets and made an unbeaten 30 as the Netherlands took a giant step towards the Twenty20 World Cup Super 12 on Tuesday with a tense five-wicket victory over giant-killing Namibia.

At a sun-soaked but near-empty Kardinia Park in Geelong the African nation were restricted to 121-6 in their 20 overs, with the Dutch using seven different bowlers to put the clamps on.

De Leede was the best of the bunch, taking 2-18, complemented by outstanding fielding.

The Europeans, boosted by former South Africa and India coach Gary Kirsten on their coaching staff, were cruising at 91-1 in the 14th over in reply before Namibia took four late wickets to set up a nervous finale.

The Netherlands needed six runs off the last over, with De Leede the hero, hitting a boundary then two to secure the win with three balls left.

“We lost wickets at bad times, we can’t afford to do that and we can learn from that as a team,” said De Leede.

“But the self-belief has always been there and it’s nice to win two tight games.

Maybe it opens up a bit more freedom for the boys.

It was a huge victory against a team that sent shockwaves around the cricketing world with a stunning 55-run triumph over Asian champions Sri Lanka on Sunday on day one of the World Cup in Australia.

The Netherlands beat the United Arab Emirates on the same day by three wickets and with two wins from two they will progress to the Super 12 if the UAE upset Sri Lanka later Tuesday.

They have made the second stage once before, in 2014, when they topped their group and then sensationally beat England.

“Never nice to be on the losing side when it’s so close,” said Namibia skipper Gerhard Erasmus.

“We put a good show in the field. With the bat, it seemed difficult for both sides but they ran better than us.”

Erasmus won the toss and chose to bat, but it looked a poor decision as Namibia slumped to 32-3 in the sixth over, struggling with their timing.

Stephan Baard and Jan Frylinck steadied the ship with a 31-run partnership before Roelof van der Merwe removed Baard for 19.

Frylinck compiled 43 before De Leede tempted him into a big hit and he was caught in the deep, then he trapped Erasmus in the same over.

Twenty-seven off the last three overs set a decent target but just seven boundaries in total was testament to the Dutch bowling.

In reply, Max O’Dowd and Vikram Singh powered to 44 without loss for the Dutch after five overs.

Singh whacked two sixes in his 39 before going for another off Bernard Scholtz and he was caught by the ropes.

Fired up, Namibia snared four more quick wickets, including O’Dowd for 35, to set up a nervy finish.