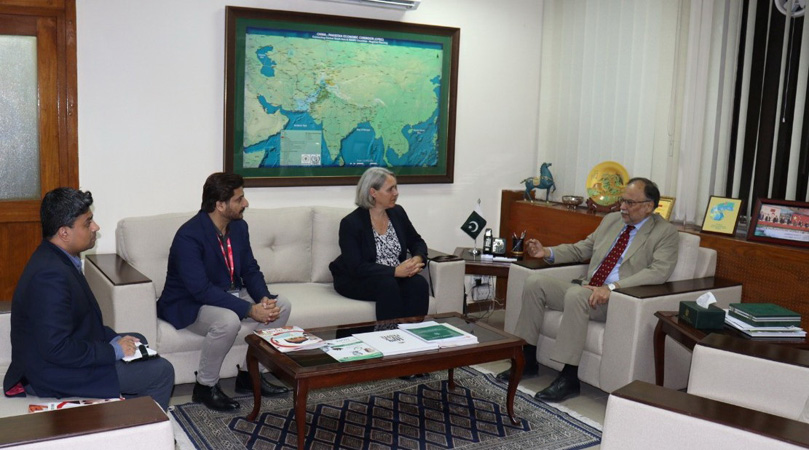 Ensuring the Government’s commitment and full support towards rehabilitation of flood affected communities, Federal Minister for Planning and Development Ahsan Iqbal said “Government is moving all available resources to get out of this natural crisis caused by the devastating floods and for this purpose we desperately need sustained and regular support of all kinds from the international community”.

These thoughts were expressed during a meeting with a delegation of international humanitarian organization Save the Children (SCI) here on Thursday.

Purpose of these meetings was to further strengthen collaboration in the government’s efforts towards protecting flood affected population especially children from water-borne diseases like diahorrea, eye infection, skin problems and their rehabilitation along with resolving nutritional issues of children, lactating mothers and expecting women including taking measures to prevent climate induced disasters such as the recent mega-floods.

During their meeting with the NDMA Chairman, the SCI delegation briefed him about the sustained support as well as projects their organization has launched for the rehabilitation of affected population especially children.

The NDMA Chairman said that we are strategizing to drain out the stagnant flood water from affected areas as it is the major cause of diseases spread. He also said that other projects like nutritional issues of pregnant and lactating mothers, building resilient communities, recovery of agriculture and farming and ensuring long-term psycho social support of children are at different stages of execution.

Country Director SCI M. Khurram Gondal assured his support and said that SCI has established temporary learning centres (TLCs), Child Friendly Spaces (CFS) and rural health centres in various flood-hit districts of Khyber Pakhtunkhwa, Sindh and Balochistan. He also informed that SCI is collaborating with the Sindh government to establish over 600 TLCs in most affected districts of Dadu, Sanghar, Shikarpur and Khairpur to promote education and provide most critical psycho-social support to the affected children, so that children could be children again.

Meanwhile, the SCI delegation called on Minister for Climate Change Sherry Rehman. On the occasion, Global Humanitarian Director SCI assured Save the Children’s support & collaboration in addressing the climate related issues faced by Pakistan to prevent disasters such as the recent flood which has caused havoc.

SCI has already initiated response in flood affected Balochistan, Khyber Pakhtunkhwa and Sindh. It is expanding operations to address the immediate survival needs in the worst-hit districts to minimize the adverse effects of flooding on health, food & security, and nutrition of children, women, and their families. Global Humanitarian Director said that Save the Children has so far reached out to over 69,000+ people, including 36,000 children through the life-saving activities under the flood response 2022.

Sherry Rehman appreciated the SCI’s humanitarian support and said the government and military along with international community’s support are ensuring to address this human crisis.

M. Khurram Gondal said that, nine-month rehabilitation is being executed under which over 2000 shelters have been established in worst hit districts across Pakistan for displaced population to protect them during winter season.