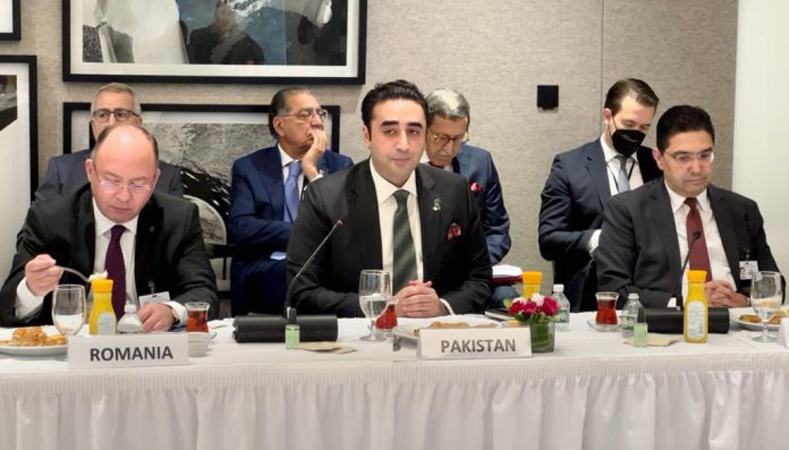 The foreign minister, in his address at the 12th Ministerial Meeting of the UN Group of Friends of Mediation on “Avoiding Humanitarian Crisis Through Mediation” also sought the UN chief’s mediatory role to seek India’s agreement to promote an equitable solution to the Jammu and Kashmir dispute in accordance with UN Security Council resolutions and the UN Charter. “The Security Council should give full support to the secretary-general in using his good offices to this end,” he told the meeting held on the sidelines of the 77th session of the UN General Assembly in New York.

He thanked the co-chairs Turkiye and Finland for organizing the meeting and said that Pakistan also commended the UN secretary-general and Turkish President Erdogan for successfully mediating the landmark Black Sea Grain Initiative. He said the important role of the United Nations in conflict prevention was unquestionable and at any stage of a conflict, the Security Council could recommend to the parties appropriate procedures or methods of settlement of their dispute, which may include mediation. Bilawal said that the UNSC also has the power to recommend terms of settlement to the parties, if they request this or if the Council considers that the continuance of their dispute was in fact likely to endanger the maintenance of international peace and security. However, he said nearly 77 years after the signing of the Charter, the challenges and threats to peace and security were perhaps more complex, but the Charter’s purposes and principles remained valid and immutable.

“It is imperative to reaffirm our commitment and confidence in these principles and to promote solutions to disputes and conflicts, between large and small states, on the basis of these principles,” the minister remarked. “Unfortunately, over the last seven decades, India obstructed the efforts of the UN mechanisms to implement the UNSC resolutions on Jammu and Kashmir. The continuation of India’s illegal actions was manifested in the unilateral measures taken on and since 5 August, 2019 to annex the occupied territory of Jammu and Kashmir without even a fig leaf of legal justification or plebiscite,” the foreign minister added.

He said Pakistan continued to advocate a more active role by the United Nations Security Council and the secretary-general. Meanwhile, the foreign minister said while addressing a meeting of the Organization of Islamic Cooperation (OIC) Contact Group on Jammu and Kashmir that there would be no peace in South Asia until the Jammu and Kashmir dispute was peacefully resolved on the basis of justice and international legitimacy. “The dispute has remained unresolved primarily due to India’s refusal to implement the resolutions of the Security Council, which stipulated that the final disposition of the State of Jammu and Kashmir shall be made in accordance with the will of the people expressed through the democratic method of a free and impartial plebiscite conducted under the auspices of the UN,” he said.

Bilawal said the Jammu and Kashmir dispute, along with Palestine, was one of the two longest- standing items on the UN and OIC agenda. FM Bilawal said Pakistan was prepared to resume a dialogue with India to resolve the Jammu and Kashmir dispute. “However, the onus is on India to create a conducive environment for such a dialogue. It must reverse its unilateral and illegal measures instituted on 05 August, 2019, halt its human rights violations in IIOJK, and reverse the demographic changes in the occupied territory,” he stressed. He expressed his profound gratitude to the OIC secretary general for once again convening the ministerial meeting of the OIC Contact Group on Jammu and Kashmir.